I was asked by a friend to view the 1.32 minutes video of Shahrizat(below) lambasting PKR and claiming her innocence over the NFC affair. Actually, I was tempted to view the video much earlier but I thought it would be a waste of time because I have read so much what the video was all about.

But having viewed the video reluctantly, I felt entertained and somewhat hilarious at what I saw – a Hindustani look alike lady at the top of her voice and gesturing aggressively at an audience that seems to enjoy the antics (some unwomanly) of the lady.

To Shahrizat, let me say this – that you have got it all wrong, and the General Assembly is certainly not the forum to defend the alleged wrong doing of your family members. Just leave that to the police, and are you not having some comfort when the Deputy IGP commented that so far the police investigation of the NFC hasn’t revealed any evidence of impropriety.

The alleged wrong doing is a private matter that has to be resolved by your family members, and since you yourself have said that you have nothing to do with the NFC affair, then why raised it at the assembly? Defend it in the court when the case gets dragged into the court.

If Shahrizat has a grudge to settle with Zuraida, why get Dr. Wan Azizah into the fry? Just get directly at Zuraida. Using such an argument makes Shahrizat, a lawyer herself looked lame, desperate, lost, and unprincipled and lacking in reasonable judgment.

What I think is most hilarious are the ‘court jester’ like support that Shahrizat gets from her predominantly women audience i.e. the clapping, cheers and laughter. Having seen the spontaneous reaction of the audience, I now believe Shahrizat makes an excellent actress.

It is so obvious that her audiences are all blind and ignorant of the truth, and if this is the nature of UMNO Wanita today i.e. to blindly support an act that is deemed wrong by many, then I dare say that this wing of UMNO is doomed to failure. - Mohd Arshad Raji 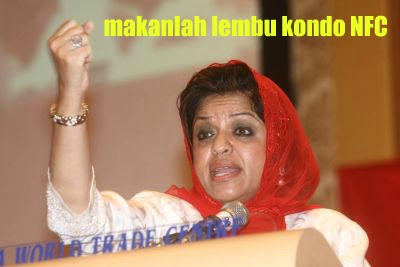 iloveBN - Umno & BN will only catch small fries for their small mistakes. To stay relevant in UMNO you have to steal and con big time. I believe this is how they gauge their winnable candidates. Look at Taib Sarawak, he's still there, Isa-former NS MB, he's back, Rahim TC (sex video & former MB MLK), he's back, Ghani Patail still remains relevant despite being sponsored for a holy pilgrimage which should have been classified as a haram trip and so many more. Who says Sharizat is not equal or better than some of those named. Azalina is also very safely protected by UMNO, Badawi who stole big time is still relevant, Mahathir, the biggest thieve is still relevant and the list can go on and on..... SO don't question any UMNO person who steals and cheats the rakyat. The more we question, the more crdibility the gain with UMNO more so when they defend themselves with dumb reasons and accuse others for their mistakes.

ANOYMOUS - You cheated us and thats the truth and either you lie or the Auditor is not creditiable. So its your family words against Aduitor General creditiable so please ask the Public who they trust. Dont deviate the Public by telling PKR Azizah to resign as its a silly move to divert the real issue.Now its between you and your family against the Aduitor General report and what a silly game you're playing with us. Its had nothing to do with the opposition and its the creditability of your family thats at stake now. So i believe you're smart enough to stop playing game.

abahpenang - It is the auditor general who reports the NFC fiasco not the opposition. She should attack the auditors general first and those stupid all the grandma of wanita umno just swallow wht sharizat say? Stupidity Has No Cure !!!!!