Is UMNO and Utusan Meloya trying to instigate violence... 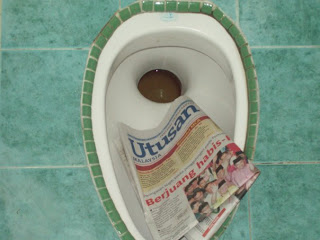 Utusan columnist Awang Selamat is privy to almost anything. He has the ear of the UMNO top dogs. They tell him things and he woofs. For example, he is probably also privy to who were behind the murder of Altantuya Shaariibuu and who plotted Sodomy II to frame Opposition Leader Anwar Ibrahim.

But as an obedient servant if not a slave to his master, he has to keep quiet over these two matters which are of prime interest to the Malaysian public. However, how does he have privy knowledge to the purported riots that are due to take place in the future?

Either he has a huge crystal-ball or he has just been fed morsels of information by his UMNO bosses. Is this Prime Minister Najib Razak's way of telling people that he and his party will pre-empt the people's anger at an unfair sodomy trial meant to lock up Anwar ahead of the 13th general election.

It certainly looks like UMNO is trying hard to pretend it does not already know the outcome of Sodomy II. So silly because the whole of Malaysia already knows for sure Prime Minister Najib Razak and wife Rosmah Mansor will guarantee a 'Guilty' verdict for their nemesis, Anwar Ibrahim, whose ability to gel the Pakatn Rakyat into an effective opposition political force threatens their own livelihood.

But Najib has not given up and has laid a trap for Anwar. Yes, UMNO is luring Anwar to a trap and its messenger is none other than Utusan.

Whatever Najib, former premier Mahathir Mohamad, PERKASA and UMNO have done has resulted in failure. The Pakatan Rakyat is getting stronger and the tide of support has not receded. This can be verified by Najib's sudden need to create a television channel - the 1Malaysia TV - to counter the opposition's media.

The PM and UMNO president has also allocated RM10 million for cyber war against the Pakatan. Najib has to let the student demonstrations carry on in peace because he is afraid that any harsh actions would trigger more heat and hatred amongst the youth for his party and coalition.

It is the youth who are the deciding voters. Najib has also been very accommodative with the demands of the trade unions but is still not able to pacify them. The disbursement of the RM500 for those eligible has not borne the desired fruits. The KR1M outlets have been mired by much bad publicity. It seems that all their efforts are in vain. 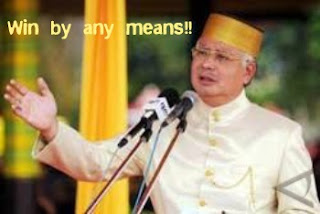 Win by any means!

Remember the GE-13 will be the mother of all elections and UMNO plans to win by whatever means. There is just too much at stake. They cannot afford to lose as a Pakatan victory will especially hurt the four power brokers in the party - Mahathir, former Finance minister Daim Zainuddin, former premier Abdullah Badawi and Gua Musang MP Tengku Razaleigh Hamzah.

A Pakatan sweep of the federal government could see the UMNO elite charged fior their crimes. Wrong doings will be prosecuted. Their financial future will thus be jeopardised!

UMNO members have generally been naive, taken for many rides and believing that the top leaders have them as their main interest. This group of “thieves” don’t even have any interest in Malaysia! If they had, Malaysia would be prosperous and not at the brink of bankruptcy today.

UMNO is so desperate to win the GE-13 that it is willing to play with fire to the detriment of public safety and harmony. UMNO is also taking a huge gamble on the wish for public unrest following the sodomy trial decision.

Several possibilities including violence against our youths

The result can go several ways. If there is street violence then UMNO will make use of this to their advantage by taking into custody all PKR leaders and this would be a big blow to Pakatan when facing the GE-13, with their top leaders all in jail. UMNO has to do it this way because they have no other means to take on the Pakatan leaders.

Malaysia has young people who are willing to go to the streets as proven in the BERSIH rally. The hatred and anger amongst the university students have boiled to the stage that they are not even afraid of the oppressive UUCA Act anymore. They have seen the Arab Spring and are willing to emulate them. This time the riots could be the mother of all riots! They have nothing to lose, they have already lost everything to UMNO for the past 54 years!

UMNO thought that the FRU and the army could be called in, but rest assured that there are also people in both the uniformed bodies who hate UMNO! There are many in the civil service who also despise UMNO!

When the violence cannot be curtailed anymore, is UMNO willing to go on a killing spree of our youth?

But the sentiment amongst the voters would by then be downright brutal towards UMNO, with the chances of a tidal wave swing towards the Pakatan Rakyat extremely likely. In fact, inevitable.

UMNO while still having remedial power can be expected to announce an emergency. Malaysia will be in chaos when the rakyat of all races won’t be afraid anymore, they will simply fill the streets. They will be fed up with UMNO.

So is this what Awang Selamat is preparing Malaysians for? Certainly, he is instigating it!

On the other hand, Opposition Leader Anwar Ibrahim is still sane and has not gone senile yet, unlike Awang Selamat. Even with Anwar in jail, Pakatan can still win the GE-13 because the wave is already there.

After winning as Azmin Ali has said, Anwar would be released. Moreover both Anwar’s supporters and the Pakatan component parties won’t let this happen. It would be falling into UMNO’s trap and would jeopardize everything that they have built thus far by getting more supporters and votes day by day without resorting to violence.

The quality of the Pakatan parties have also been improved since they have succeeded in weeding out the Trojan horses, doubled face bigots, traitors, UMNO moles, lazy, insincere, and self-centred individuals.

While UMNO-BN is still chock-full of them and may add several more to their group by taking in PAS recalciltrants Nasharudin Mat Isa, Hasan Ali, PKR rejects Zul Noordin, Zahrain Hashim, Tan Tee Beng and the like.- Nawawi Mohamad, Stan Lee.