UMNO fears for its future... 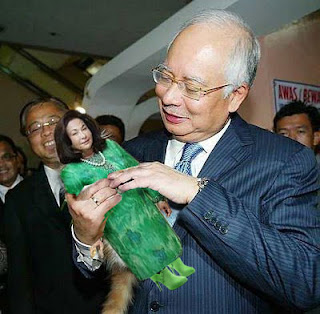 The UMNO GA2011,wasn’t a congregation of minds meeting to discuss how the real Malay agenda of uplifting them, their economics, and their future are being discussed.It wasn’t that event.

It was just an event allowing mediocre and uncultured minds to let out their own frustrations and sense of absolute fear.The fear of loosing power. UMNO fears for its future.

Give us power bellowed Najib because we want to continue with the agenda? Why wasn’t the agenda, whatever it is, debated in that General Assembly(GA)? Give us power intoned KJ so that the nikmat or tidings we enjoy with having power is kept. Nikmat to do what? To pillage and plunder?

The agenda of the GA was actually to whip delegates into frenzy about how to defend UMNO and defend the life as the leaders and UMNO warlords have always known. It’s a life of living a lie pretending to fight for the interests of the majority and the interests of the nation.

UMNO exists to secure power so that through power they can do all the bad- corruption, pillage and plunder of the nation’s wealth. As far as the Malay agenda is concerned, yes, the GA2011 is a non-event.

How does UMNO sustain itself? You get the answer if you analyzed what just went on during the UMNO General Assembly 2011.

UMNO gets on by making Malays believed that they being besieged attacked, assaulted and victimized. How UMNO can survive? How does it do that? By fabricating lies and manufacturing stories.....

What kind of political party and government by extension, that keeps its people on a leash and drumming into them a debilitating dependent mindset? This is a party not interested in cultivating people.- dato mohd.ariff sabri