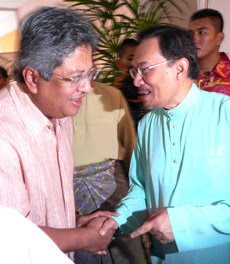 "It is against the party's code of ethics," said Abdullah when asked to elaborate on Zaid's sacking.

When asked whether Zaid wanted to be sacked from the party by attending the events, Abdullah said it was just a perception.

"Let it be interpreted that way, but most importantly Umno has to be consistent. We cannot have double standards," said Abdullah adding that the decision cannot be appealed.

When met at the PKR congress, Zaid had told reporters that he did not expect to be sacked from the party.

Zaid had resigned from Abdullah’s Cabinet in protest against the use of the Internal Security Act (ISA) recently.

He had been appointed minister earlier this year and was tasked with bringing about reforms to the judiciary.

Since his resignation Pakatan Rakyat partides have been actively courting him to join them.