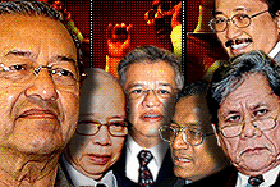 The High Court here today ruled that the Royal Commission of Inquiry's findings implicating six individuals in the controversial "Lingam video clip" cannot be challenged. Justice Datuk Abdul Kadir Musa made the ruling when refusing leave to five of the six to seek a review of the commission's findings.

He accepted the preliminary objection raised by senior federal counsel Azizah Nawawi, for the commission, that the findings were not reviewable on the grounds that they were not a pronouncement of a decision and thereby did not affect the rights of the individuals or their obligations. Abdul Kadir said the findings of the commission remained as "findings" and could not be construed as a decision to which an individual was entitled to seek a judicial review to quash the findings under Order 53 Rule 2 (4) of the Rules of the High Court.

He said the commission did not make a decision. Instead, it only conveyed its findings in a report and submitted it (a report) to the King on May 9, which was later transmitted to the government, which decided to make the report available to the public on May 20.

"Until May 19, 2008, nothing was known about the aforesaid findings of the royal commission as contained in the report. None of the said five commissioners ever made known their said findings either to any or all the five individuals or to the public," he said.

Abdul Kadir said whatever happened after the commission had submitted its report to the King was entirely beyond its (the commission's) control. 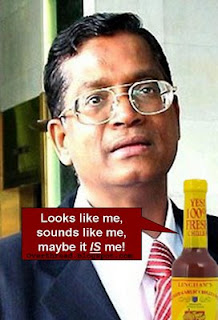 The five-member panel of commissioners, in their report, had found the video clip showing senior lawyer Datuk V.K.Lingam in a telephone conversation with former chief justice Tun Ahmad Fairuz Sheikh Abdul Halim over judicial appointment to be authentic.

The commission also recommended that appropriate course of action be taken against six individuals -- Lingam, tycoon Tan Sri Vincent Tan, Umno secretary-general Datuk Seri Tengku Adnan Tengku Mansor, former premier Tun Dr Mahathir Mohamad and two former chief justices Ahmad Fairuz and Tun Mohd Eusoff Chin -- for misconduct. It found that there was sufficient evidence to investigate the six men for offences under the Sedition Act, Official Secrets Act, the Penal Code and the Legal Profession Act 1976. Except for Mahathir, the other five filed for leave for a judicial review in an attempt to quash the inquiry's finding.

Abdul Kadir also held that although it could not be denied that the five individuals were adversely affected in its natural sense by the commission's findings, they were nevertheless not so adversely affected within the context of Order 53 Rule 2 (4) of the Rules of High Court. He disagreed with their proposition that the commission's findings were reviewable based on the New Zealand common law which construed "findings" as a decision within the ambit of Order 53.

The Malaysian courts should not import common law from other countries where the provisions of Malaysia's laws were different, he said, adding that if one wanted to import the interpretation of New Zealand's Judicature Amendment Act 1977 into Malaysian law, there must first be changes made to the Malaysian Acts. Ahmad Fairuz and Eusoff Chin are appealing against the decision while the other three indicated that they may consider to appeal.

The Lingam video clip was proven to be very detrimental to the gomen and as a result the gomen lost 5 states, got almost wipe out in Wilayah Persekutuan KL and denied its 2/3 majority in Parliament in the 2008 general election. So whats next for those implicated in the Lingam video clip, who are UMNO big wigs and their trusted cronies.........

I'm really enjoying the design and layout of your blog. It's а ѵery
easу on the еуes whіch mаκeѕ it much more plеasant for mе to сome heгe and viѕіt more
often. Did you hire out a devеloper to cгeate уour theme?
Outstanding wοrκ!

I really liκe your blog.. νery nicе cοlors & themе.
Diԁ уou makе thiѕ website уourself or did you hire somеone tο
do it fοг yοu? Plz reply as I'm looking to create my own blog and would like to find out where u got this from. many thanks

Fantaѕtic beat ! I wish tο apprentice while you amend your ѕite, hoω can i ѕubsсribe for a blog ωeb site?
Тhe account helρeԁ mе a acceptаble deal.

Heгe is my weblog: tens units