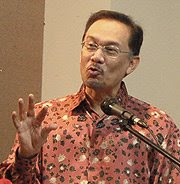 He said Anwar, who is also the PKR de facto leader, should not remain silent on the matter.

"He should explain his stand and that of the party he represents (PKR) so that the people, especially the non-Muslims who supported the opposition, will be able to evaluate and come to a decision on whether to continue to support the opposition," he said in a statement today.

Samy Vellu said in the last March 8 general election, many Indians had carried PAS flags "but is this how PAS and other opposition parties reward them." 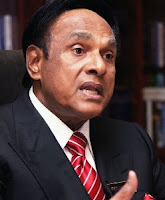 Mathematically, its difficult for PAS to implement hudud even if they come to power. PAS will never get UMNO's support. So,why the fuss? Samy Velloo should first ask UMNO why is UMNO still focussing on that issue?

Samy Velloo should also think about his future in MIC . The electorates of Sungai Siput had already kicked him out. The signal is clear. While his contemporaries like Mahathir,Liong Sik & Kheng Yik are enjoying their retirement, Samy Velloo still wants to cling on to power and be MIC chief.

As for Anwar,he has other more important agenda to attend to, rather than wasting his time addressing this old issue.