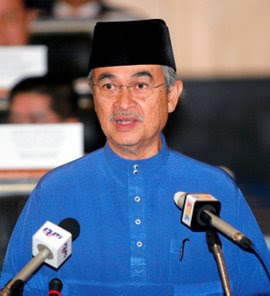 Prime Minister Datuk Seri Abdullah Ahmad Badawi today tabled the anticipated Malaysian Anti-Corruption Commission (MACC) and the Judicial Appointments Commission (JAC) Bills for first reading in the Dewan Rakyat, in a race to fulfill an agenda that he had set for himself before the power transition in March.

He told the House the two bills’ second and third reading will be done in this meeting which will be adjourned on Dec 18. The short time to get them passed as law has got some MPs grumbling as they need to quickly get feedback from stakeholders for the debate before the vote.

On how long it will take for the bills to be passed, he said it will depend on the Speaker to allocate time for the second and third reading.

“If they (the MPs) are really focused, just speak what is necessary… I think we can get the bills passed by the end of the year.”

Highlights of the MACC Bill:

a.The MACC will be headed by a Chief Commissioner (CC), who will be appointed by the King on the advice of the prime minister. He will have the powers of a Deputy Public Prosecutor "as authorised by the Public Prosecutor".

b. The CC is effectively answerable to Parliament, as he has to table an annual report on the MACC's activities to an oversight committee called the Special Committee on Corruption, which is made up of seven members appointed by the King from both houses of Parliament, for a three-year term.

c. The MACC will be advised by an eight-member Anti-Corruption Advisory Board, who will be appointed by the King. The CC is among the eight.

d. A Complaints Committee comprising five members appointed by the relevant minister in charge of the Commission will also be set up. It will monitor the MACC's handling of complaints of misconduct which is non criminal in nature against MACC officers, and identify weaknesses in the work procedures of the MACC which might lead to complaints and make recommendations

e. The Bill will greatly expand the jurisdiction now given to the Anti-Corruption Agency. It will allow for investigations against public bodies, which includes the Federal and State governments, any local or statutory authority, any government department, service or undertaking, any registered society, any sports body registered under the Sports Development Act, trade unions, co-operative societies, companies and subsidiary companies.

f. MACC senior officers (rank of Commissioner or above) can inspect and make copies of the bank accounts of any individual, inspect the safe deposit boxes in banks and to seize any document or item inspected

g. Empowers a Judge of the High Court to order a lawyer to disclose information in respect of any transaction or dealing relating to any property which is liable for seizure

h. Empowers an MACC officer to require a person under probe to give a sworn statement identifying all properties owned by him. He can also require any relative or associate of that person to give such information as well. The definition of "relative" is wide, including lineal ascendant or descendant of the person, or his/her spouse and siblings.

i. All offences under the proposed Act are seizable, which means any person under probe can be arrested.

j. Penalties under the present Act have not been enhanced. However, the 14-day minimum jail sentence under the ACA Act has been removed. This can have the effect of increasing the success rate in prosecution.