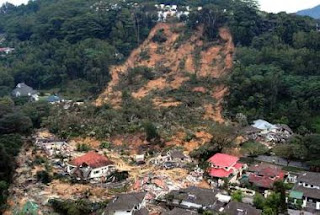 Search and rescue teams are trying to locate four people believed trapped in the rubble of two of 14 bungalows buried by a massive landslide in Bukit Antarabangsa early today.

Selangor police chief Datuk Khalid Abu Bakar said late this evening that the four were from bungalows 15 and 16 in Taman Bukit Mewah, one of the two housing estates affected by the landslide. The other is Taman Bukit Utama.

He said the fate of the four people was unknown as the landslide had shifted the two bungalows from their original sites.

Selangor police chief Datuk Khalid Abu Bakar said late this evening that the four were from bungalows 15 and 16 in Taman Bukit Mewah, one of the two housing estates affected by the landslide. The other is Taman Bukit Utama. He said the fate of the four people was unknown as the landslide had shifted the two bungalows from their original sites.

Khalid said the teams were using an excavator to move the rubble but the teams would ensure that the trapped people were unhurt in the search and rescue operation. Three people were killed in the landslide which occurred at about 4am when most of the residents were asleep.

Khalid said the search and rescue operation would go on round the clock unless it rained heavily and the ground conditions prove too dangerous for the search and rescue personnel. He said 14 SAR teams were involved and they were carving out two alternative routes to enable desperate residents on Bukit Antarabangsa to leave the area as the main road has been cut off. 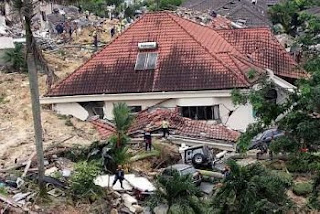 Between 3,000 and 5,000 residents, mainly living in apartments in the vicinity of the landslide area, have been asked to evacuate for their safety as the ground was unstable. Helicopters were used earlier to evacuate the infirm and elderly.

"Residents instructed to leave the area will be accommodated at Sekolah Kebangsaan Hulu Klang. They will be allowed to return to their homes after the Public Works Institute of Malaysia (Ikram) confirms that the area is safe," he said.

Khalid said the ground was still unstable and earth movements were detected when any digging was done. The landslide area covers four hectares.

The sultan of Selangor, prime minister and deputy prime minister and the Selangor mentri besar visited the site to see the situation on the ground earlier in the day. Datuk Seri Abdullah Ahmad Badawi instructed that construction atop Bukit Antarabangsa be stopped immediately. Datuk Seri Najib Razak, who was accompanied by wife Datin Seri Rosmah Mansor, announced that all hillslope development in Selangor is prohibited.

Kuala Lumpur Hospital Public Relations Officer Zaiton Abu Bakar said 14 people had been given outpatient treatment at the hospital for injuries sustained during the landslide. The injured were administered first aid at the Addinniah surau at Bukit Antarabangsa before being sent to the nearest hospitals in ambulances, at least 12 of which were seen at the scene. 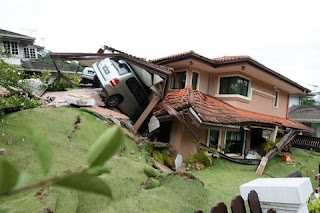 According to the Fire & Rescue Unit, the landslide was caused by underground water movement. A search and rescue operation has been mounted involving personnel from the military, Civil Defence Department, Special Malaysia Disaster Assistance and Rescue (Smart) team, Fire & Rescue Unit and Ampang Jaya Municipal Council.

Bukit Antarabangsa State Assemblyman Azmin Ali said at the scene that earth movement continued to take place and that electricity supply to several housing estates in Bukit Antarabangsa was disrupted. Power was restored to some areas tonight.

My condolences to the families that lost their beloved ones...........

N condolences to Najib as well..