President George Bush was pelted with shoes by a journalist and called a dog on his stop-off in Iraq. He didn't seem too bothered by it. Why? coz he's a dog and deserves more than that!!

An Egyptian man said on Wednesday he was offering his 20-year-old daughter in marriage to Iraqi journalist Muntazer al-Zaidi, who threw his shoes at U.S. President George W. Bush in Baghdad on Sunday,

The daughter, Amal Saad Gumaa, said she agreed with the idea. "This is something that would honour me. I would like to live in Iraq, especially if I were attached to this hero," she told Reuters by telephone.

Zaidi's gesture has struck a chord across the Arab world, where President Bush is widely despised for invading Iraq in 2003 and for his support for Israel.

Also,many people are bidding for Muntazer al-Zaidi's "wonder" shoes and bidding starts at US 1 million dollar.

However if you guys think throwing shoe is the ultimate insult, how do you term this behaviour........... 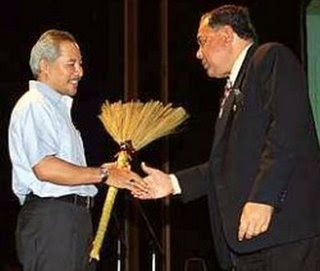 that broomstick was soooo funny ... i read this at work ... and i loved out loud ... literally .... lonesomepath.blogspot.com