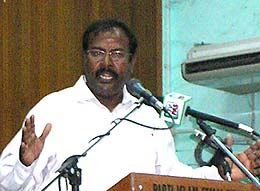 A PKR parliamentarian has been denied entry into Sarawak by immigration officers at the Kuching International airport. According to N Gobalakrishnan, who is MP for Padang Serai, the incident happened at around 5.30pm and he believed that it was politically motivated.

"The moment I reached the airport, immigration officers told me that I am not allowed to enter due to instructions from the state government," he told Malaysiakini.

"The immigration officer gave me a notice which reads 'Tuan bukan rakyat Sarawak, tidak berhak untuk masuk ke Sarawak tanpa permit atau pas Akta Imigresen 1959-1963' (You are not a citizen of Sarawak and are not eligible to enter Sarawak without a permit or immigration pass).

When contacted, Gobalakrishnan said he was still at the airport's immigration office waiting to board a flight back to Kuala Lumpur at 7.25pm. However, he later refused to board the flight and vowed to stay put at the airport.

Sarawak PKR state assemblyperson Dominique Ng subsequently went to the airport to negotiate with immigration officials. He told them that under the federal constitution,the state government had no right to stop a parliamentarian entering Sarawak.

However, Gobalakrishnan boarded an AirAsia flight back to Kuala Lumpur at 9.50pm. 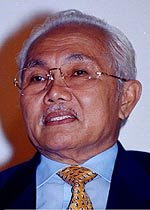 Ng, a trained lawyer, told Malaysiakini that Gobalakrishnan had instructed to file a suit in the Sarawak court to challenge the entry ban. Gobalakrishnan was headed to Sarawak to attend a 'party programme'.

According to the MP, he was barred because he had defended a fellow parliamentarian who questioned the role of a company belonging to the state government in the Dewan Rakyat last week. The MP also vowed to raise the issue of him being barred at the next parliament sitting.

However, no official response could be obtained regarding the incident.

PKR has upped its campaign in Sarawak, with its de facto leader Anwar Ibrahim claiming that the opposition is on track to dethrone the state Barisan Nasional-led by Chief Minister Abdul Taib Mahmud in the next state elections.

Anwar has also called on opposition parliamentarians to visit the state on a regular basis to touch base with the people there. However, Taib has dismissed the possibility of Sarawak falling into the hands of the opposition alliance Pakatan Rakyat.