Muhammad Mohd.Taib says ketuanan Melayu is just a catchpharese & does not exist......... 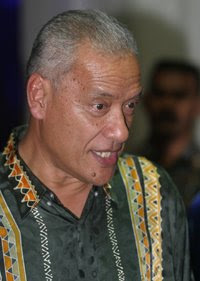 Umno information chief Tan Sri Muhammad Muhd Taib says ketuanan Melayu (Malay supremacy) is just a catchphrase, and does not exist in real life. He said the crux of the matter is not in the phrase itself but whether the Malays and other bumiputras can make use of what they have learnt and make contributions to the society.

"As long as the Malays/bumiputras can give their best to strive forward and show outstanding results in business and service sectors, or even when working for others, they have succeeded."

Muhammad Taib, who is rural and regional development minister, said this during an interview with Sin Chew Daily carried today, when asked to comment on the much-debated topic. He said ketuanan Melayu was a phrase coined by some people for purposes best known to themselves. He reminded those who talked about ketuanan Melayu the whole day, or write and sing about it that at the end of the day it is meaningless no matter how much many times they shout "ketuanan Melayu" if they do nothing to better themselves.

"If a kampung has only one clinic which is owned by a Malay, and people of all races seek treatment at the clinic, then the Malays have dominance in that kampung.

"Likewise, if the Chinese are the sole provider of (certain) services in an area, and other races patronise their shops, then the Chinese enjoy dominance in that particular area."

Muhammad Taib said what should be noted is that Malays do not have the the vast knowledge and capability to to compete with others, and whatever talk about ketuanan Melayu and Malay dominance is irrelevant. He admitted that in the past Umno had indeed dominated the Barisan Nasional (BN) but the so-called dominance was used to allow non-Malay candidates to be fielded by Barisan in Malay-majority constituencies and use its influence to urge the Malay voters to accept non-Malay candidates.

However, he said, the situation has changed lately, and Malay-majority seats that were once considered safe (for BN) are no longer so, as people's mindsets have changed, and on top of that, Indian voters are largely unhappy with the government.

On the requests made by Chinese on education and equality, Muhammad Taib felt that they are not unreasonable as they are only trying to defend their rights. However, he said they must look at the situation while bringing up their requests, as certain things said at the wrong time would offend others.

But UMNO used this catchphrase to get away with what they wants.........