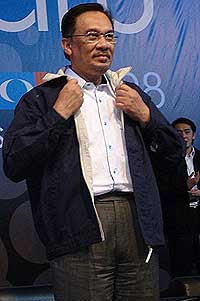 Anwar Ibrahim has refused to concede defeat months after missing a deadline to seize power but admitted his plan to sign up defecting lawmakers had been a "headache".

After March general elections that saw the opposition alliance gain stunning victories, Anwar said he would topple the government by Sept 16. But that deadline came and went and the promised mass defections from the ruling Barisan Nasional coalition never materialised.

His momentum stalled in October when Prime Minister Abdullah Ahmad Badawi agreed to stand down next March, defusing public anger at the government's handling of the economy and failure to introduce promised reforms. But Anwar was defiant at the annual congress of his PKR party, held over the weekend, urging his supporters to continue to campaign against the BN, which has ruled Malaysia for half a century.

"Despite September 16... I am still very confident that we will form the next government," he said to thunderous applause from a crowd of more than 10,000 late Saturday.

"When (will we take over)? Wait. Until then, shake the foundations," he said.

"Take it from me, not as Anwar but a representative of the conscience of this party and struggle, we are with you heart and soul, we will fight, we will struggle, we will never surrender."

Anwar, who needs to win the support of 30 government lawmakers to take control of the 222-seat parliament, said that although he had strong support, he had been blocked from challenging the administration.

"It is not easy to explain why we couldn't form the government as there are some matters that I still cannot talk about," he said.

"We wanted to take over power legally and follow the constitution and we wrote a letter to Abdullah to say so but he refused to meet with us," he added.

"We even sought a no-confidence motion in parliament but we were denied even this."

Let down by potential defectors

The former deputy premier admitted he was let down by MPs sympathetic to his cause who were reluctant to show their hand and others who were intimidated into staying on the government benches.

"When I asked them why, they said they had to because they were suspected of being the ones who would cross over, so sometimes this gives me a headache," he said.

Anwar announced plans to target Sarawak, where many of the reputed defectors hail from, and which is expected to hold state elections some time next year.

"I want all PKR MPs to line up to go down to Sarawak and I want all of them to go without exception," he said. "There is a big change coming there."

Anwar is seizing on public anger with the government in Sarawak and neighbouring Sabah, which are rich in petroleum, gas and timber but relatively undeveloped and impoverished compared to Peninsular Malaysia.

"A lot of people tell me they can't wait for us to take power," he said. "They ask me when I want to take control of (Malaysia) and I want to say yesterday."

Just as a reminder...taking over a gomen is not like buying roti canai from the mamak stall, even that you got to negotiate how many roti canai and what type of curry you need........