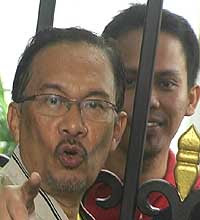 The Kuala Lumpur High Court today has fixed Feb 5 and 6 to review an earlier decision by the Sessions Court to hear Opposition Leader Anwar Ibrahim's sodomy trial in the lower court.The dates were fixed by High Court judge Mohamad Zabidin Mohd Diah during a case mention this morning, according to Anwar's lawyer Sankara Nair.

"The court will hear the arguments for revision on Feb 5 and 6," Sankara said when contacted.

"The defence this morning has also applied for our client (Anwar) to be excused from court hearings on Feb 5 and 6 because it is a technical argument. The application was granted," the lawyer added.

On Nov 7, Sessions judge SM Komathy Suppiah has decided that the case be heard in her court after finding a certificate to have it transferred to the High Court signed by Attorney-General Abdul Gani Patail to be invalid.

The 61-year-old Anwar, who is also Permatang Pauh MP and PKR de facto leader, was charged three months ago with sodomising his former aide, Mohd Saiful Bukhari Azlan,23.If convicted, he could face up to 20 years in jail. He is currently out on a RM20,000 personal bond.

In deciding that the case should stay with the Sessions Court, justice Komathy has among others explained that her ruling was based on a promise that AG Abdul Gani will not be involved in the case.

Abdul Gani is still under investigation by the Anti-Corruption Agency following a police report lodged by Anwar about alleged tampering of evidence pertaining to the ‘black eye' incident in 1998.

Following the investigation, Prime Minister Abdullah Ahmad Badawi gave an assurance that the AG will not be involved in Anwar's latest sodomy case to avoid any conflict of interest.

"The case raises a unique situation where it is evident that any involvement by the AG in this case would seriously undermine public confidence in the administration of criminal justice," justice Komathy has said in her ruling on Nov 7.

The defence had challenged the validity of transfer certificate because Abdul Gani was still under investigation by the ACA following a police report lodged by Anwar on alleged falsification of evidence pertaining to the "black eye" incident while Anwar was in police custody in 1998.

Probably the gomen wants the Abdul Gani to be cleared from all these allegations, so that he can play a prominent role in the case..........