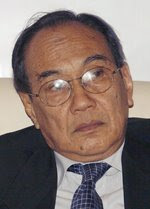 DAP chairman Karpal Singh (DAP-Bukit Gelugor) says he is in possesion of an audio recording of what what Chief Justice Tan Sri Zaki Azmi said in Kuching, and subsequently reported by the New Straits Times (NST) on Nov 8 under the heading "Stop it now, corrupt court staff warned".

The report quoted Zaki as saying :"It took me six months to be nice, to bribe each and every individual to get back into their good books before our files were being attended to".

Zaki subsequently denied what was reported and a clarification was carried in the NST on Nov 9.

Zaki’s clarification, published in NST on Nov 9, said: "Your reporter must have interpreted what I said, which is during that period, there was corruption in order to get things done at the court registry, as I myself having done it. I have never in my life bribed or received any bribe."

Karpal urged Zaki to step down from the judiciary's top post for making the statement in Kuching, Sarawak on Nov 7.

"Rest assured, there is an audio recording of what Zaki said," said Karpal.

Karpal gave Zaki seven days to step down, failing which he will move a motion against Zaki under Article 127 of the Federal Constitution for having misled the country with his clarification.

He said he was speaking in his capacity as chairman of the parliamentary caucus on the Integrity and Independence of the Judiciary and urged members of the Barisan Nasional backbenchers club to forward the names of those interested in joining the caucus to make it more representative.