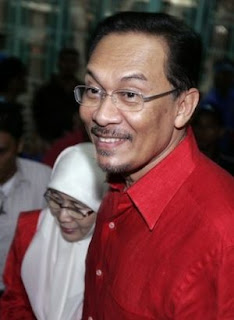 Anwar Ibrahim's sodomy trial looks set to be delayed again following an application by the prosecution today for a stay of proceeding pending their application to appeal for the matter to be moved to the High Court.The Sessions Court this morning was to have fixed a date for the trial to be heard before Sessions judge SM Komathy Suppiah.

Last Friday Komathy had dismissed an application by the prosecution to have the case transferred to the High Court. Her ruling was based on her finding that the transfer order signed by Attorney-General Abdul Gani Patail was invalid.

"This case raises a unique situation where it is evident that any involvement by the AG in this case would seriously undermine public confidence in the administration of criminal justice," she had said.

Anwar's lawyers have objected the stay application. They have also complained that they have not received several documents from the prosecution as promised last week.Lead prosecutor Yusof Zainal Abiden however gave his undertakings that the documents would be given soon.

Komathy has not decided on the prosecution's application for a stay.

Anwar was charged three months ago with sodomising his former aide, Mohd Saiful Bukhari Azlan, 23.If convicted, he could face up to 20 years in jail. He is currently out on a RM20,000 personal bond.

The desperate prosecutors wants the case to move up to a higher court? They couldnt buy the current judge, but they believe that a change of judge will give them the advantage,including denial of bail for Anwar.