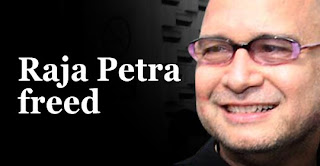 The High Court today ordered that Raja Petra Kamarudin, editor of the popular news portal Malaysia Today, be released from detention after ruling that his arrest for allegedly causing racial tensions was unlawful.

He quoted the judge as saying the grounds given for Raja Petra's detention were insufficient and that his arrest under the Internal Security Act was unlawful.

The ISA allows the government to detain anyone for an initial two-year period without charges, and to extend the detention indefinitely.

Raja Petra, who was accused of threatening public security and causing racial tension by publishing writings that ridiculed Islam, will be taken to court later today to be formally set free.

It's not the first time that a court has ordered the release of ISA detainees, and the ruling also does not prevent the government from re-arresting him under the ISA. The government can also appeal the ruling.

Raja Petra has increasingly infuriated authorities by publishing numerous claims about alleged wrongdoing by government leaders on Malaysia Today. The government has denounced most of Raja Petra's allegations as lies.

The detention came at a time when the government's popularity hit at an all-time low and is riven with factional fighting and faces the threat of being ousted by the opposition.

Meanwhile the sodomy charge against Anwar Ibrahim will be mentioned at Kuala Lumpur Sessions Court, Jalan Duta at 3 p.m. today.

Judge SM Komathy Suppiah will deliver her decision on whether the matter can be moved up to the High Court as applied by the prosecution.

Hopefully she will reject the AG’s certificate of transfer. I believe that justice will be with you again.........

One good news........... and I also hope the learned judge will have the guts to overturn AG's request for transfer.