Judge order Anwar's trial be heard in the same court as AG's order is invalid....... 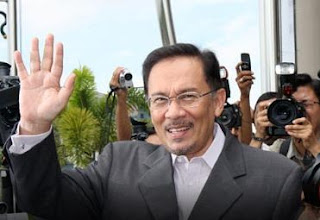 The Kuala Lumpur Sessions Court today ruled in favour of Opposition Leader Anwar Ibrahim and decided that his sodomy trial would be heard in the same court.

Delivering the ruling this afternoon, judge SM Komathy Suppiah had ruled that the transfer order signed by Attorney-General Abdul Gani Patail was invalid.

The court fixed next Friday for mention.

The decision will pave the way for the sodomy trial to begin - three months after Anwar claimed trial after being charged with sodomising his former aide, Mohd Saiful Bukhari Azlan, 23. If convicted, he could face up to 20 years in jail. He is currently out on a RM20,000 personal bond.

In previous arguments on the case transfer, Anwar had objected to the application because the transfer certificate was signed by Abdul Gani.

The defence team's objection was on the basis that the AG should not have played any role in this case as he is being investigated for allegedly having tampered with evidence in Anwar's trials 10 years ago.

The defence has also argued that Prime Minister Abdullah Ahmad Badawi had given an assurance that Abdul Gani would not be involved in the case.

Expressing surprise with the decision, Raja Petra said: "Not many people have challenged the act (ISA) so much and I did not have much high hopes (of being released).

Raja Petra was greeted by his wife Marina Lee Abdullah and two daughters. Some 50 supporters and friends clapped and cheered when the blogger appeared. He later left the courthouse with his family in a red Rolls-Royce.