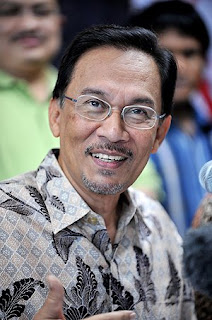 After a botched bid to oust the government in September, Malaysian opposition leader Anwar Ibrahim will likely have to bide his time until elections in 2012-13 before making another bid for power. From watershed elections in March to his triumphant return to parliament after a decade's absence, Anwar dominated the headlines. Even his arrest and trial on fresh sodomy charges failed to thwart his campaign to topple the government by his self-imposed deadline of Sept 16.

Victory seemed within his grasp when the government apparently felt compelled to ship 40 MPs to Taiwan on a 'study trip' in mid-September to prevent them from defecting to Anwar's camp and thus giving him a majority in parliament. The deadline passed. Financial turmoil swept the globe, and with an economic slowdown looming, voters in this Asian country of 27 million people suddenly had more immediate worries than Malaysia's chronic political intrigue.

Now the 61-year-old Anwar, whose People's Justice Party holds its annual convention this weekend, has to explain why he is not addressing the meeting as the new prime minister of Malaysia.'His (Anwar's) strategy of haste that he adopted after March 8 (elections) stopped working after Abdullah was forced to retire,' said Ooi Kee Beng, an analyst at Singapore's Institute of South-east Asian Studies.

'Now, he has to do it the patient way.' Lacklustre Prime Minister Abdullah Ahmad Badawi essentially derailed Anwar's express train to power by deciding to hand power to his more assured deputy, Najib Razak, earlier than planned.

Mr Abdullah's National Front coalition, which has ruled uninterrupted for 51 years, stopped being transfixed by Anwar and started making policies to deal with an economy that is expected to grow by only 1.5 per cent next year from 5.4 per cent this year.

Mr Najib, 55, will take office in March when he becomes president of the United Malays National Organisation, the dominant party in the 13-party National Front. Mr Najib, who is deputy premier and finance minister, has taken the fight to Anwar by linking him to unpopular measures proposed by the International Monetary Fund when Anwar was finance minister during the 1997-98 Asian financial crisis, while projecting an aura of economic competence himself.

He has announced some measures to offset lower economic growth, but hasn't raided the treasury to do so, putting US$2 billion (S$3.02 billion) saved from petrol subsidies into pump-priming measures. Mr Najib even stole some of Anwar's thunder by relaxing a requirement that ethnic Malays have to own 30 per cent of companies - one of the affirmative action programmes that aim to uplift Malays who constitute 60 per cent of the population. Anwar's opposition coalition had campaigned for abolition of those programmes in the March elections.

Inflation is falling rapidly from a peak of 8.5 per cent in mid-year and the central bank on Monday unexpectedly cut interest rates for the first time in five years. 'There's a widespread acceptance that Anwar will no longer take over the country,' said an investment analyst at a foreign bank in Singapore. 'Being PM is out of the question right now.' 'Najib is reinforcing his power base. He's the new face of Malaysia,' he said.

The opposition and some pro-government newspapers have started to push the idea of snap elections soon after Mr Najib takes power in March, saying he would need to win a popular mandate. But Umno's coalition allies are still in disarray after the electoral debacle eight months ago. 'The risk (for snap polls) is very great. It will be suicidal because of the hangover from the March political tsunami,' said political author Yahaya Ismail.

Other analysts said Mr Najib would likely wait for mandatory re-drawing of electoral boundaries in 2012 before calling for polls. The government's current five-year mandate ends in 2013.

One glimmer of hope for Anwar could be polls in the timber- and petroleum-rich state of Sarawak on Borneo island. Sarawak has been a Barisan stronghold since it joined Malaysia in 1963 and may hold state elections as early as next year. Provided Anwar can fend off what he says are politically motivated sodomy charges that are a reprise of the court action that got him jailed in the 1990s, and can keep his fractious three-party coalition together, victory in Sarawak could be another lever to apply pressure to government legislators.

Key to that will be how well the opposition runs the five states it controls. There has already been a backlash in the pro-government media over issues ranging from race relations to dual language street signs. 'The next electoral showdown is the Sarawak election, so it is a given goal for (the opposition coalition) to make an impression there,' analyst Ooi Kee Beng said. 'It will try to open the floodgates so that the 'March 8 tsunami' will flow into east Malaysia as well.

Well its like playing toto, you buy and you hope for a chance......and with Najib as PM, the chances are so wide open, only its a matter of time.