Razak Baginda-"The innocents have become the victim while the liars are running supreme".......... 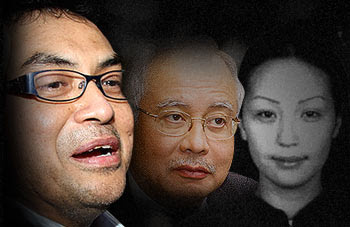 Abdul Razak, who was recently acquitted of abetment in Altantuya’s murder vouched for Najib and his wife Datin Seri Rosmah Mansor and urged those responsible to stop spreading lies.

“I implore all of you and the public to stop spreading lies about the DPM and his wife. I know Datuk Seri Najib and his wife had never met the deceased, Altantuya.

“So much fitnah has been thrown at the DPM and his wife.

“Those who spread such lies can never produce any authentic evidence because there is none. The truth is the truth and nothing can change the truth,” he told a packed press conference on Thursday.

This is Abdul Razak’s first press conference since his acquittal. He had spent 22 months in jail.

Not wanting to go into the details of the case, Abdul Razak said he had cancelled an earlier scheduled press conference as he was still trying to adjust to life as a free man.

However, he reiterated his innocence and said he had no intention of running away.

“I am innocent. I have been through the system, spent 22 months in jail, and the system has let me out.

“I have no intention of running away. Why should I when I am innocent,” he added.

Abdul Razak plans to go the United Kingdom in the near future to do his doctorate, something he had planned before being imprisoned, he said.

Abdul Razak said he was coming out to tell the truth because “I do not want to allow the liars to prevail.”

Say whatever you like Razak Baginda,but the fact that you are an intimate friend of Najib, that stigma will be there for all to see.

Any moron would know that there must be a motive for the killing of the Mongolian girl. You just dont kill people for the sake of killing. Like my fellow bloggers, me too very interested to know the truth.

You said that you are an innocent victim, why dont you swear on the koran as all UMNO cronies, including Najib like to do to prove a point..............