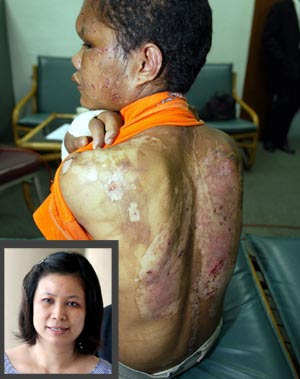 Housewife Yim Pek Ha was today sentenced to 18 years' jail after she was found guilty by the Sessions Court here of three counts of voluntarily causing grievous hurt to her Indonesian maid four years ago.

Yim, 40, a former air stewardess, was found guilty of causing grievous hurt to Nirmala Bonat, 23, with a hot iron and hot water at Villa Putera, Jalan Tun Ismail here in January, March and April 2004.She was jailed for 18 years on each count but Judge Akhtar Tahir ordered the jail terms to run concurrently from today.

In his judgment, he said the offences, committed several times by Yim were cruel and showed sadistic behaviour which could not be tolerated in the society.

"To do it one time is cruel, more than one time is more cruel. You deserve to serve the jail term consecutively but it will be harsh if I send you (to prison) for 54 years, so the sentence will run concurrently," said Akhtar.

However, he acquitted and discharged Yim of a fourth charge of causing hurt to Nirmala, 23, with a metal cup at the same place on May 17 2004 after ruling that there was a doubt as to whether the injury was caused on that day.The court had heard that Yim had poured hot water on Nirmala and ironed her breasts with hot iron, resulting in serious injuries to her breasts, thighs and back.

The mother of four children burst into tears and was comforted by her husband after the court made the ruling. Amid her sobs she was heard saying:"Why, why is this happening to me?"

Earlier, Akhtar concluded that Yim was the one who had caused the injuries to Nirmala and that the inference by the defence that Nirmala had self-inflicted the injuries was unsustainable and could not be accepted.

"No person in the house saw Nirmala causing injury to herself. It is only a possibility raised up by the defence. I cannot agree that just a person merely knocking her head on a wall can lead to the inference that she can cause several serious injuries to herself.

"I notice that the evidence of the accused started off by stating bad points of Nirmala and there was still underlying anger in her after three years, so I am not suprised if she caused the injuries. She also gave evidence that she had slapped the victim. She is capable of being physical.

"From the evidence tendered, the accused exaggerated the flaws made by Nirmala in doing her house chores. To me that is not a reason to be cruel," said Akhtar.

He also said that Nirmala's full evidence, which was supported by other evidence, showed that she was not telling lies.

In mitigation, Yim's counsel, Jagjit Singh, said he could not mitigate that his client was remorseful as she maintained her innocence. Deputy public prosecutor Raja Rozela Raja Toran replied that the extent of the injuries suffered by Nirmala reflected the cruelty and inhuman nature of the accused.

Yim will serve the jail term from today as her counsel has yet to file an appeal or seek a stay of execution of the sentence.

Only an animal will do such things. There are hundreds more cases of inhumane maid abuses gone unreported. Will this be a lesson to others? The answer is simply NOPE!