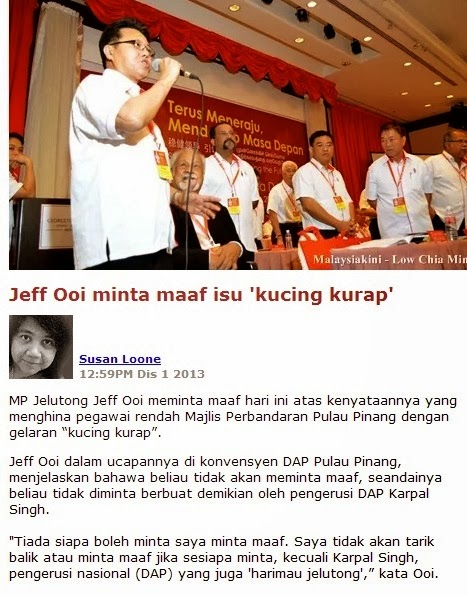 Jelutong MP Jeff Ooi has apologised to DAP delegates and the Penang Municipal Council (MPPP) for his controversial ‘kucing kurap' remark, which had irked many quarters.

Ooi went up to the stage at the party's state convention in Penang today, grabbed the microphone and said "I sincerely apologise if it had hurt people's feelings".

Ooi said he could not retract his statement as he had uttered the words. However, since the party's national chairman Karpal Singh (right) had asked him to, he now offered his apologies.

"No one can tell me to apologise except Karpal Singh, the national chairman and the Tiger of Jelutong," he added.

When he said this, the crowd booed at Ooi.

Earlier, in his speech, Karpal had strongly taken Ooi to task for insulting lower rank MPPP officers who were sent to handle illegal hawker issues in Jelutong, which Ooi had complained about.

Ooi had said he was an MP and should not be sent "kucing kurap" (low ranking), ill-informed staff to handle the issue.

Karpal said he could not direct Ooi to apologise as only the central executive committee (CEC) had that power. But he added that the matter would be taken up to the CEC if Ooi remained defiant.

"I call upon the ‘New Tiger of Jelutong' Jeff Ooi to openly and unconditionally apologise to the Penang Municipal Council workers," he said at the state DAP convention today.

When Karpal said this, the delegates clapped.

"Kucing kurap, what does it mean? (A dog) attacked with ringworm, a mangy cat or someone of no significance?" Karpal asked.

"High or low, everyone must be accepted, no one can be considered low, just from different segments," he added.

Karpal said, as the delegates gave him another round of applause, that not even a sweeper should be insulted.

Ooi also got a bashing from secretary general Lim Guan Eng (left), saying he must also listen to state DAP chief Chow Kon Yeow and the party," to loud applause from the delegates.

"If you do not listen to Chow, you do not respect the party," he added.

"But since he has apologised, we accept it," said Lim to another round of applause.

Over the week, Ooi had been ticked off by several quarters, including  Chow, who said his remark directed at MPPP president Pattahiyah Ismail was "unfair", and that it was up to him to apologise.

This was followed by four workers unions, representing 2,000, demanding Ooi to apologise and retract his remark but Ooi had refused.

Opposition leader and PKR supremo Anwar Ibrahim also said Ooi had uttered very insulting words which in Malay, means "diseased cat", and should never be used, even on the lowest ranks of society.-malaysiakini 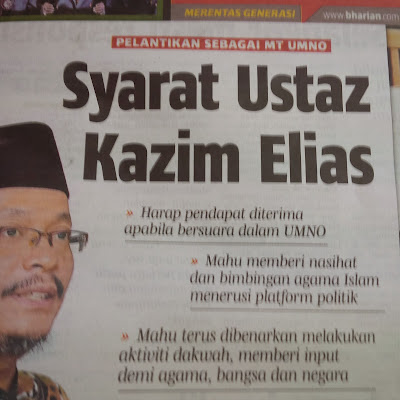