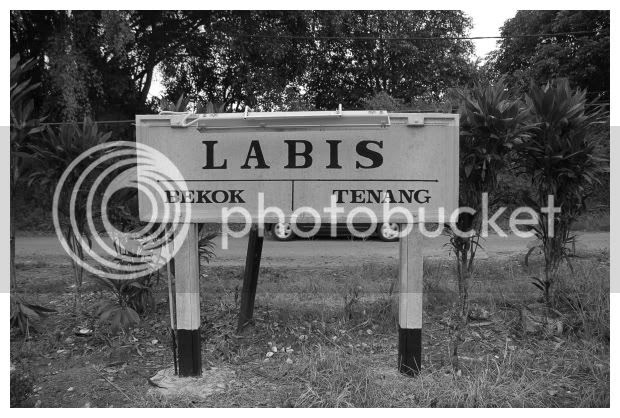 The battle for Labis...

The next general election is expected to be the closest fight to form the new Malaysian government. And several seats across the nation are likely to be heated battles with the slimmest of majorities. The Malaysian Insider takes a look at some of these hot seats in what will be an intense election for control of Malaysia.

Labis feels like an island, secluded and quiet with nary a sound from the hustle and bustle one would expect to see in a constituency held for six terms by two prominent MCA stars — former president Tun Dr Ling Liong Sik and current chief Datuk Seri Dr Chua Soi Lek.

Like its name, which some historians believe was derived from “labi-labi” or river terrapins, the daily pace here is almost tortoise-like; slow and sleepy.

Most of its residents work in rubber estates or oil palm plantations, while the others are petty traders, government servants or merely passing through to the busier parts of Johor.

Here, one can neither hear the buzz of industries nor see white plumes of smoke polluting the skies as the nearest factory is miles and miles away.

After 7pm, buses no longer ply the town’s roads — rarely do passengers get off at this stop, anyway.

“Labis becomes a remote area after 7pm... a dead sea. The irony of it all... Ling Liong Sik was the transport minister when he held the Labis seat,” local resident S. Madhavan remarked recently when met in the evening of a characteristically quiet Monday in this sleepy hollow.

Dr Ling held the Labis seat from 1986 to 2003.
Sixty-three-year-old Tey Koh Hout, offering a toothless grin, had the same to say.

“MCA... they are all the same, aren’t they? They have big-shot government posts and they forget who gave them the opportunity,” he told this news portal.

“There is so much anger with the MCA... sometimes, they are so angry that people cannot even remember why they are angry.

But they know for certain that they want a change,” said Tan Chin Guan, a local DAP leader.

“The Labis people get slaughtered in so many ways... but many do not even know, they are so innocent.

“But today, some have leapt off the fence... they say they want to try something new,” former Education Ministry officer G. Krishnabagwan said.

Madhavan, Tey, Tan and Krishnabagwan, who each spoke at separate interviews recently, are among the estimated 22,600 non-Malay voters who make up a sizeable 62 per cent of the 36,000-strong electorate in Labis.

Their voices echo a growing resentment among the non-Malays here against the MCA and may well be the death knell for the party, which has been struggling since its dismal performance in Election 2008 to recapture at least some of its lost Chinese support.

But during the interviews, there was one resounding sentiment that could not be avoided — Labis’ non-Malay voters have largely gone pro-opposition.

At every step of the way, those interviewed were too quick to blame the MCA and Barisan Nasional (BN) for every hardship they face — from the common flooding of their neighbourhoods and the lack of street lamps to the lack of job opportunities and affordable housing.

Tan, a 60-year-old who spoke in halting English, lent voice to a perceived sentiment when he said that some voters feel so strongly against the MCA that they have even forgotten their reasons.

“But it makes sense... when you see the same faces everyday, read about the same names, and your life remains the same, you tend to want something different. It’s always been MCA’s... Tun Ling for so many years, then Soi Lek... now Tee Yong,” he said, the last referring to the incumbent MP, a son of Dr Chua, the town’s previous parliamentary representative.

“You begin to think to yourself, let’s try something new. What’s the harm in that? We could always change the government again,” he said, during the interview at his home in the Labis town centre here.

Dr Chua won the Labis seat in the 2004 general election, but stepped down in late 2007 after a sex scandal.
Dr Ling, who was transport minister and MCA president for 17 years until 2003, held the Labis parliamentary seat for five terms from 1986, the same year he took on his government and party posts.

He was succeeded by Dr Chua in the 2004 polls, after which the latter was appointed health minister in the Abdullah administration.

The seat is held today by Datuk Chua Tee Yong, son of Dr Chua, who took his father’s place after a sex scandal in late 2007 forced the veteran politician to exit politics briefly, just months before the 2008 election, no less.

Tee Yong is said to possess the same boldness and bravado exhibited by his outspoken father.
Taking into account his relative youth — he is now 35 years — and his reputation as the man who accused the Selangor Pakatan Rakyat (PR) government of a RM1 billion Talam Corp accounting scandal, Chua junior is said to be a popular face among his Labis constituents.

But youth and passion may not be enough to win the game for the MCA in Labis, which is fast becoming the stage for a political battle that could very well spell the party’s demise in its southern fort.

It is not Tee Yong that the non-Malay voters are against — it is the flag that he flies and memories of the years of alleged neglect that it carries with it.

“The present MCA president, he is doing better. His son comes here often, we see him a lot.

“Last time, Dr Ling never came at all... I think his reputation itself has ruined things for MCA,” said one drinks stall owner, who only identified himself as Mr Tan.

“Everyone called Dr Ling a yes-man. A weak man. The Chinese here, when we speak of MCA, we equate it to weakness.

“It is not a deep-seated hatred. But for sure, the non-Malays are for the opposition, for the DAP,” Mr Tan said.

The father of two agreed that Labis town has seen no development over the past few decades, pointing out that its population is ageing and disappearing quickly to seek better opportunities elsewhere.

Chua Tee Yong is the current Labis MP, winning the seat in the 2008 general election.
He explained that even his children now work in Singapore, saying that he was only staying in Labis to “pass time” after his wife suffered a fatal fall while the couple were living in Kuala Lumpur.

Tey, who was met at his rundown single-storey terrace home in Taman Indah, central Labis, admitted as much that he often sees Tee Yong in the constituency.

He said the leader appears capable and intelligent, and possesses the same charisma of his father, but despite this, insisted that he was carrying the wrong party flag.

“I want the rocket... the rocket that shoots to the stars. We want a change... DAP is much better,” said the 62-year-old stroke patient.

To Krishnabagwan, the ruling party’s greatest failing concerns the slow pace of Labis’ development, which he says has yet to achieve its fullest potential.

He pointed out that in any sundry shop in Labis, its owners would only have one complaint — they serve the same customers day in, day out.

“Our youths leave us. Those who stay become gangsters… they are too poor to continue with their education,” he said.

Interestingly in Labis, not a single resident interviewed expressed fear over hudud law, the Islamic penal code that the MCA has been using as its trump card for the polls.

The party has been traversing the length and breadth of the country, telling the non-Malay voters that under a PR government, the purportedly dominant PAS will enforce hudud law, which prescribes amputation for theft, even on those who do not profess the Islamic faith.

“Hudud? Why care? It’s for the others to worry about. I am not Muslim,” Mr Tan told The Malaysian Insider.

Tey was just as dismissive, pointing out: “Why should be worried about something that is not of our religion?”

Tan (Chin Guan) said from his reading on the ground, while some Chinese voters were apprehensive, most would be satisfied when they are told that the hudud scare was merely a vote-fishing tactic by the MCA.

“They know what is going on... we have been holding plenty of gatherings to make sure they understand,” he said.

It is believed that Tee Yong will likely defend the Labis seat, despite earlier talk that his father may seek re-election in the constituency.

The talk in town now is that instead of Labis, Chua senior may opt for Batu Pahat, another seat where the Chinese voters make up a significant 46 per cent of the total population.

But some have also suggested that Dr Chua’s past sex scandal, although no longer in the limelight, may hamper some of the MCA president’s chances among the female voters, rendering it possible that he may opt out of the polls again this term.

For the opposition, the DAP’s Senator S. Ramakrishnan, who has been seen working the ground in Labis since the Tenang by-election last January, is expected to run for the Labis seat.

The move is seen as a strategic one for the DAP — if it is true that the Chinese votes are in the bag for the opposition, Ramakrishnan’s entry into the fight may give the much needed swing in the Indian vote to help PR win Labis.

“There are many Indians still on the fence... but there is still a sort of anger with MCA and Barisan Nasional (BN) and I think that will make the difference,” said Madhavan.

But Johor MCA vice-chairman Steven Teoh has a different view.

“Its true... we have been here for half a century... and of course in so many years, in this long journey of life, it is normal that both good and bad things are done.

“People tend to remember our mistakes instead of our good deeds. So it is very difficult for us in MCA... we cannot keep talking just about how good we are,” he said when met at his office in Gelang Patah.

“But when Dr Chua took over MCA, we went through a booming, very successful transformation,” he said, adding that he was certain that the president’s past would not have any traction at all in the coming polls.

With both sides of the political divide appearing equally confident of their chances, it is tough to see which way the Labis vote will swing.

But in all this, Dr Ling’s legacy, Soi Lek’s sordid past and the young, ambitious Tee Yong and his possible battle with an Indian leader from the DAP, placed against a backdrop of disgruntled voters, are exactly the ingredients of the Hollywood-type popcorn politics that observers expect to see in Labis come the 13th general election.- Clara Chooi,malaysian insider