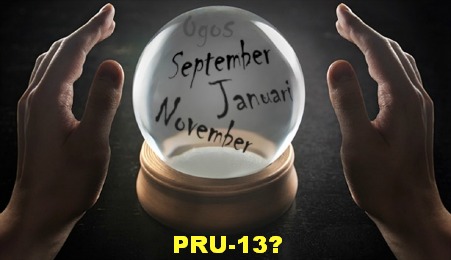 Najib to spring GE13 suprise..
Speculation is swirling that Prime Minister Najib Razak may spring a surprise and dissolve Parliament these few days in a bid to salvage his coalition's chances of retaining control of the federal government.
"Some of the Umno-BN MPs are saying he will dissolve next Monday. It is his prerogative, so it's hard to tell if this time, he will really go for broke. But we are all tired of waiting," PKR MP for Batu Tian Chua told Malaysia Chronicle.

Indeed, the guessing game over when Malaysia's 13th general election will be held has gone beyond mere tradition or a pleasant national pastime.

Not only have business investors and the man the street complained about the prolonged political uncertainty, Najib's indecisiveness has given the Opposition opportunity to fire deadly salvos at his corrupt administration, with the latest involving a minister in his own department - Nazri Aziz.

Nazri's son Nedim was accused of receiving an expensive US-made SUV from a Sabah tycoon who had previously been accused of carrying out money-laundering activities for Sabah Chief Minister Musa Aman. Yet Nazri has insisted there was nothing corrupt about this and that the scandal would not affect the BN's chances in GE13.

“Why should it be a problem? It is between him (Nedim) and Michael (Chia). Ask him (Chia) if it is a problem. Why (would this) harm BN? Why BN?” Nazri shot back when surrounded by reporters a day ago.

But not all in the BN coalition, especially his own Umno party, feels as assured as Nazri. Circulating around town is an SMS in Malay that reads 'Salam, bila agknya pru13..kedaan xmihak pd bn inga skrg' or 'when is the GE-13 since the situation is not on BN’s side until now'.

Indeed, the situation now is bad for Umno without even a gentle breeze of good feeling in the air. Scandals mostly related to big-time corruption continue to pockmark and drag down Najib's flailing government.

None of the scandals have been resolved. Instead, so much details have been exposed by whistle blowers that Umno-BN leaders no longer bother to even try and cover up the leaks.

Indeed, Nazri's playboy son's prolonged 'borrowing' of a luxury car from a tycoon of dubious background epitomizes the disconnect between the wealthy and ruthless Umno ruling elite and the struggling working classes who are already upset at runaway property, food and transport prices.

Even the more savvy politicians in the Umno-BN have urged Najib to drop a new traffic summonses system. The AES or Automatic Enforcement System is a pet project involving Najib's own close aide Mustapha Omar, and despite public outcry that it was just another 'highway robbery' aimed not to punish traffic offenders but to make money at the people's expense, Najib has refused to cancel its implementation.

Catch-22 of his own making

To political watchers, these still red-hot scandals along with the swelling public distaste for MCA and its president Chua Soi Lek make it more likely that Najib will use the opportunity to delay GE13 to next year. MCA is the B second largest party after BN. The Chinese-based party is expected to lose most if not all of the 15 seats in Parliament it now holds.

They reiterated that the PM was in a Catch-22 situation, whereby if he dissolved Parliament now, he risked a poor electoral result and whereas if he delayed, the risks could worsen. The BN's 5-year mandate to govern ends in March 2013 and Parliament will automatically dissolve on April 29 even if Najib refuses to do anything.

"To me, the GE13 date is not visible as yet. Perhaps it's a very difficult decision for Najib to make. BN is in the process of trying to get the BR1M2 paid in November/December but most likely it can only be done in January. I don't think Najib will dare to dissolve Parliament before BR1M2. So earliest possibility is December 2012 but safer for him Jan 2012. And most likely, it would be after Chinese New Year in March. No one would be surprised if he went for full term," PAS MP for Kuala Selangor Dzulkefly Ahmad told Malaysia Chronicle.

Some Umno insiders believe Najib had no choice left but to delay holding nationwide polls for as long as possible.

They defended his refusal to call for snap polls last year and earlier this year.

According to them, even with the help of the Election Commission and all government machinery, BN leaders still had to depend on the feel-good atmosphere due to huge swing in favor and sentiment towards the Pakatan Rakyat led by Opposition Leader Anwar Ibrahim.

"No point talking about what Najib should have done. For whatever reasons, he didn't and we have no choice but to look forwards not backwards anymore for the GE13 timing. People will be lulled from Christmas onwards, and continue either in festive mood or year-end and new year holidays mood.

Come January 2013, Najib will let the parents have some money when sending their children to school, like really having money to spend provided by the RM200 vouchers," an Umno watcher told Malaysia Chronicle.

"For Muslims, the mood will be reinvigorated with the Prophet Muhammad's Birthday o Jan 24. Then the Chinese will have their turn to feel good by 11th and 12th February after celebrating the Lunar New Year.

If Najib misses this moment in March 2013, then he will have lost every opportunity he has. Parliament will be automatically dissolved and this may be the worst option as it will signal to the people how desperate and out of ideas he and BN are. For sure, they will show BN the door, wouldn't you?" - Malaysia Chronicle

The senior minister was confronted with evidence of his son Nedim (left) using a luxurious vehicle registered in Michael Chia's name, who together with Musa Aman (Sabah chief minister), were cleared by Nazri of corruption in parliament earlier.

Nazri had provided written answers in parliament that there was no corruption in the four-year-old scandal where Chia was alleged to have been arrested in Hong Kong for trying to smuggle S$16 million of Musa's cash to Malaysia. Nazri also denied that Chia was arrested, or that he had cash with him.

Nazri attributed these findings to the Malaysian Anti-Corruption Commission (MACC) and the attorney-general (AG).

Talking to reporters on Nov 1, Nazri explained that all his statements in parliament came from the MACC and AG, over whom he had no control.

He was only the minister answering questions in parliament on issues that he was not involved in.

As such, he sees no conflict of interest with Michael Chia. Sadly and shamefully, Nazri was in effect saying that he merely parroted what these government agencies told him, for which he disavowed any responsibility.

Nazri's stance immediately raises an alarm. If Nazri disclaims responsibility over his statements, then who is responsible to parliament for them?

Nazri is a cabinet minister in the Prime Minister's Department, looking after parliamentary affairs, as well as de facto law minister.

So, if Nazri's disclaimer is justified, does it not mean that in addition to Nazri (right) himself, the prime minister and the entire Barisan Nasional (BN) cabinet can also be freed from responsibility over possible false statements on the scandal made in parliament?

Doesn't this amount to the Barisan Nasional leadership abdicating wholesale its accountability to parliament, and by extension, betraying the trust upon which the people have elected the coalition to power?

This is certainly a serious breach of the principles of parliamentary democracy upon which this nation was founded, for which Prime Minister Najib Abdul Razak can no longer keep silent and must promptly stand up to make his stand to the nation.

He must urgently clarify in parliament whether Nazri was authorised to make those statements and whether every minister is personally responsible for what he states in parliament.

And since MACC comes under the Prime Minister's Department while the AG is the cabinet's chief legal adviser, both of whom are claimed by Nazri to be responsible for the statements he made in parliament, Najib must now give unequivocal answers to many perplexing questions on the scandal, compounded by Nazri's contradicting versions of the story.

To appreciate the seriousness of these contradictions perpetrated by Nazri in parliament, I will briefly recap them as follows:
No explanation was given why the BN government had kept its strange silence, while reports of Michael Chia's arrest with S$16 million cash meant for Musa Aman had swirled for the past four years.

It is important to note that while Nazri was dancing like a yo-yo in parliament with his statements of exoneration for Chia and Musa, none of the investigating/law-enforcing bodies - ICAC, MACC or AG - ever uttered a word on the scandal (except for MACC's statement on Oct 5 that investigation was still in progress), least of all any declaration of the duo's innocence.

All we have is Nazri's words - words that are not collaborated or substantiated with even an iota of evidence, in addition to being self-contradictory and conflicting with MACC.

Under the circumstances, Premier Najib must take responsibility for the bumbling minister in his department and step up to give categorical answers to the following questions in parliament to avert a total collapse of confidence in his leadership:

1. Is it true that ICAC has conveyed its findings of money laundering to MACC, including a money flow chart trailing the Sabah timber corruption money through a convoluted network to end up in Musa Aman's UBS AG account in Zurich, complete with details of various nominee accounts, payers and payees, deposit amounts, etc? (This money flow chart has been widely circulating on the Internet for some time).

2. Is it true that MACC has carried out an investigation of its own on Sabah timber corruption including probe on Musa Aman and his brother Anifa Aman (Malaysia's foreign minister) since the Michael Chia incident in Hong Kong?

3. Is it true that neither ICAC nor MACC has ever exonerated Chia and Musa of money laundering and corruption?

To avoid falling into the same quagmire as minister Nazri has, the premier is well advised to buttress his answers with sufficient and credible facts - the kind of evidence that will restore public confidence.

With regard to Nazri's latest refutation of any impropriety over his family's beneficial link to Michael Chia on the grounds that his son is his son, with whom he has nothing to do, this is sheer child's talk.

Whether Nazri likes it or not, his son Nedim is his immediate family, and for any improper favour granted to Nedim by virtue of Nazri's position as a minister, the latter is deemed beneficiary and recipient of that improper favour.

Would Chia have given the half-million-ringgit Hummer SUV for use by Nedim's family, if not for the fact that Nazri is a senior minister capable of doing Chia a favour?

In this case, Nazri easily stands out as a prime corruption suspect, as he has already stuck his neck out in parliament where he recklessly cleared Chia (as well as his alleged master Musa Aman) of any wrong-doing.

This is clearly a case with classical corruption ingredients, cut out for action by any corruption buster worth ihis salt in any democratic country.

However, in Malaysia, our MACC has already played deaf and dumb on the Chia-Musa scandal for the past four years. Will it also do a Chia-Musa on the latest Nazri-Chia corruption scandal this time around?- kim quek,malaysiakini 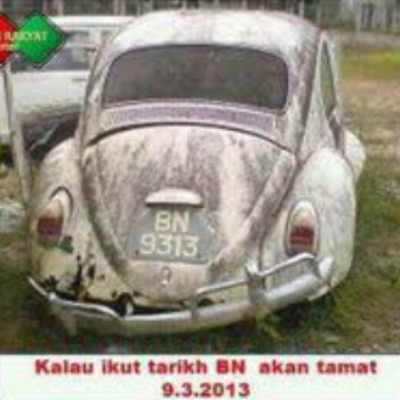