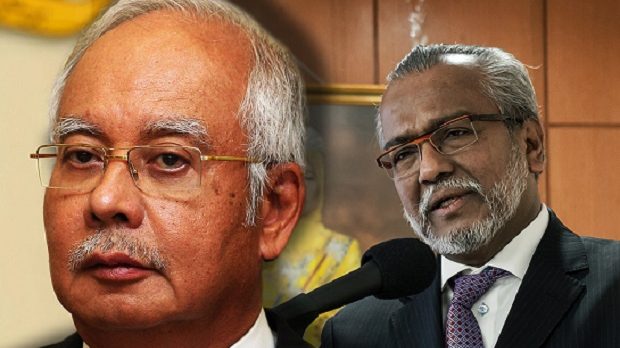 Who are you calling a
coward now, Shafee?...

The trial sent Najib’s nemesis behind bars for five years. It also ended Anwar’s political career. It served as a warning to others that Najib could do the same to those who got in his way.

So,who is the coward now?

In January 2016,  after the Federal Court verdict against Anwar in the Sodomy II trial, Shafee gave press interviews in which he described Anwar as a “coward”‘.

Shafee usually has plenty to say to people, but when reporters approached him with the SR allegation, his response was a meek, “I will issue a statement, but not today“.  So, who is the coward now?

Why has the cat got his tongue? Why is he acting like a dog with his tail between his legs?

Najib remains silent, because when things go  awry, he prefers others to defend him. He probably knows that he may implicate himself further by opening his mouth. Where are the sycophants to prove their loyalty to Najib?

One political observer said, “They are waiting for their dedak before speaking out.”

Ten reasons to be concerned

First. When the government appealed against the High Court acquittal, Najib did not enlist the government’s Public Prosecutors, but engaged Shafee. This is most odd. Why?

Second. Nancy Shukri, Minister in the PM’s Department, told parliament that Shafee’s fee was RM1,000. Did she really think the low fee was because Shafee was preforming a service to the nation? Is the alleged reciept of RM9.5 million, the real fee. Is Nancy in contempt of court?

Third. Both men are keeping quiet about the allegation. Shafee is a rich man and money is not a problem. Why was this RM9.5 million kept secret? Who were the real recipients of this RM9.5 million? What did Shafee do with that money?

Fourth. If Shafee did not receive the RM9.5 million from Najib, then a simple, “No” would have sufficed. He did not. Why?

The more Najib and Shafee dodge the question about the allegation, the more speculation will build, that there was government interference in Anwar’s trial.

Fifth. The allegations are serious. It suggests something sinister at work, behind the scenes. When he won his case against Anwar, no new evidence had been submitted. The High Court acquitted Anwar because the DNA evidence was unreliable, but the Federal Court upheld the conviction. Why?

Sixth. Shafee’s appointment in 2013, should not have  happened. When Anwar’s accuser, Mohd Saiful Bukhari paid Najib a visit at his Taman Duta home, to report about an alleged sodomy incident,  Shafee was present. Conflict of interest!

Seventh. Having put Anwar behind bars, Shafee and his sidekick, Khairy Jamaluddih, went on a government sponsored roadshow, to justify to the rakyat, Anwar’s conviction. Why the overkill? Perhaps, Najib did not think the rakyat was convinced of Anwar’s guilt.

Eighth. With a poor turn-out, the government ended its sponsorship but both Shafee and Khairy continued the roadshow. The plan to humiliate Anwar had backfired.

Ninth. Khairy told the audience at the roadshow, that BN will no longer keep silent on the conspiracy charge, and that Shafee will “bring the truth.”

In the light of the RM9.5 million allegation, what is the truth, Khairy?

Tenth. Shafee gave press conferences and boasted about “delivering justice”. Many lawyers and at least one former High Court judge slammed him for “advertising himself” and for lowering the dignity of his profession. 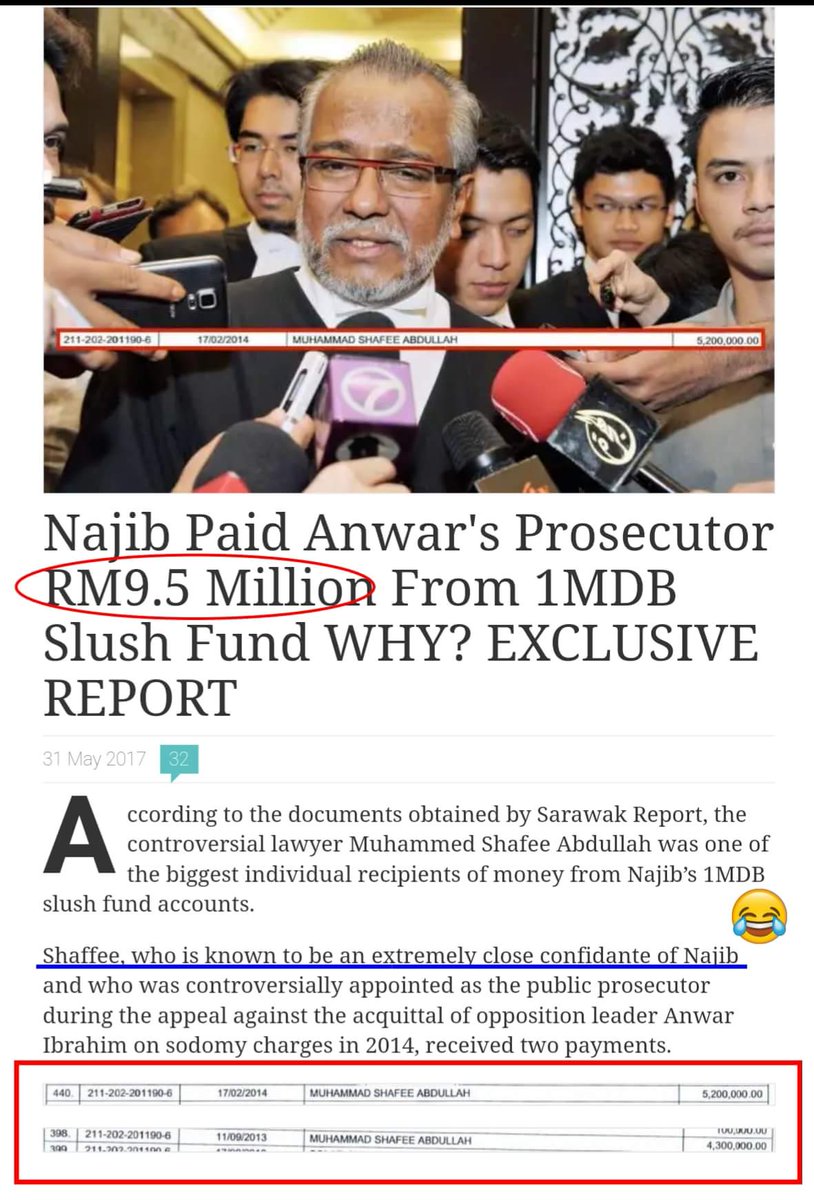 Shafee dismissed their concerns, and said that he took “no pleasure” in the Federal Court’s decision to convict Anwar.

Blaming Anwar, he said, “a young man’s life has been wrecked,” and “I know that justice has finally been done, so I am professionally satisfied with the result today.”

Lawyers are supposed to uphold the law. The allegation of RM9.5 million does not lend him any credibility and brings his profession into disrepute. What justice?

Perhaps, it was not Shafee’s legal genius, which helped to turn the tables on Anwar.

As for wrecking lives, Shafee has wrecked the hopes and dreams of Malaysians to be rid of corrupt politicians and crooked lawyers. He tarnished his profession, and destroyed a functioning democracy from operating.

With this allegation in mind, Shafee’s past cases should be re-examined. - Mariam Mokhtar 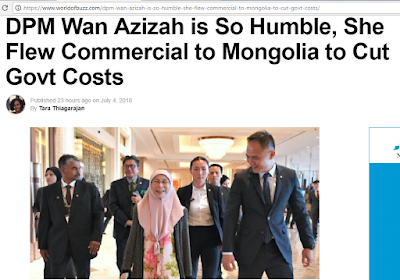 - she opted to fly commercial, transit six hours in Tokyo
- she put up in a normal hotel room at Shangri-La Hotel
- she did not want excessive VVIP treatment

I sincerely hope Dr Wan Azizah made Malaysia proud as well. There are not many countries in the world which have women as Deputy PM's.

I do have some thoughts for Dr Wan Azizah. Perhaps she may find it useful.

The private jet business took off in the United States (and later Europe)  fueled by the higher and higher salaries that American CEOs and corporate leaders were being paid. When CEOs were beginning to be paid in the hundreds of thousands and in the millions of US Dollars many US corporations realised that it was "cheaper" to hire a private jet to fly their CEOs around than to fly commercial.

If the CEO is paid say US$5 million a year (which is not unusual) the CEO costs over RM3000 per hour (based on 20 work days a month, 8 hours a day plus benefits).  At this type of costs you do not want your CEO waiting in transit at an airport for SIX hours. Or take the slow commercial flight from A to B.

Plus there are subsequent costs. The CEO possibly has to make billion dollar or hundred million dollar decisions at the end of his flight. Every delay has a follow through cost.

Imagine Tun Dr Mahathir spending SIX hours in transit. Thats enough time for Tun Dr Mahathir to overthrow the BN government, restructure the Cabinet, show a flag at the Palace, go for a ride on his horse and grant three different interviews on TV.  Time is so very precious.

Just some points for Dr Wan Azizah. Wishing her well and a safe journey home. - ostb Mahathir to visit China in mid-August... 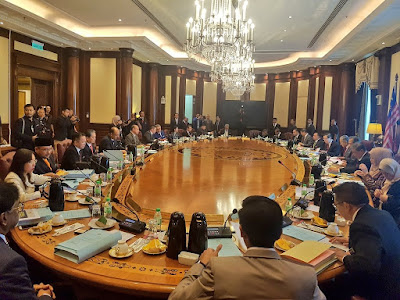 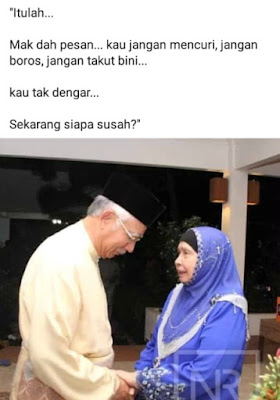 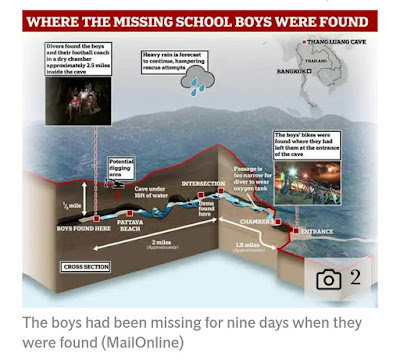