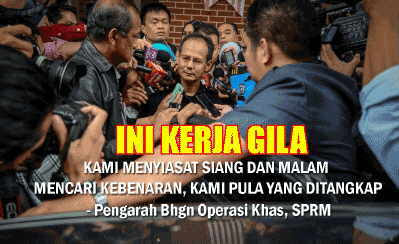 Both Azmin Ali, deputy president of PKR, and Lim Guan Eng, secretary-general of the DAP, dismissed an article by Raja Petra Kamaruddin that they had both met Muhyiddin for discussions on a confidence motion in Parliament by which Najib would be deposed.

They both said their only meetings with Muhyiddin was on official business.

Azmin is menteri besar of Selangor and Lim is chief minister of Penang. Muhyiddin was deputy prime minister until he was dropped from the Cabinet last month.

Azmin said he had only met Muhyiddin as deputy prime minister to discuss Selangor’s negotiations with the federal government on a takeover of water assets and had not met him since he was ousted.

He had similarly met Najib on the same issue.

Guan Eng said he had never met Muhyiddin privately, whether individually or in a group. “I never met Muhyiddin to overthrow the prime minister. I never met him outside official functions. The only time I’ve met him was when he was chairing official meetings with chief ministers and menteris besar,” he said in Penang.

Raja Petra’s article on Malaysia Today said Muhyiddin had attempted to line up opposition members of parliament together with a faction of Umno MPs to table a confidence motion against Najib, who has faced extensive public criticism over his handling of 1Malaysia Development Bhd and links between Penang-born businessman Jho Low and his family.

Raja Petra said Muhyiddin was thwarted by PAS, whose president Abdul Hadi Awang, announced he would not back a confidence motion. - fmt

Malaysian Prime Minister Najib Razak has confirmed the wing part found on French department La Reunion island in the Indian Ocean last week is from MH370, the Malaysia Airlines flight that disappeared en route from Kuala Lumpur to Beijing with 239 people on board on March 8 last year.

Razak told an almost empty room at about 1.57am (Kuala Lumpur time):

“Today, 515 days since it disappeared, it is with a heavy heart I must tell you an international team of experts has conclusively confirmed that the aircraft debris found on La Reunion is indeed from MH370.”

After tests conducted on this debris in Toulouse, France, the public prosecutor’s office in Paris announced — using less definitive language than Razak — there are “multiple strong presumptions” that the two-metre-long object was a flaperon, a part of the trailing edge of the wing of the Boeing 777-200ER that was operating as MH370. Tests will continue today in Toulouse.

Razak’s press conference came only moments before that of the French authorities. His pre-empting of the French announcement follows dissatisfaction from the public prosecutor’s office in Paris over the lack of transparency from Malaysia about what it knows, and knew, about the disappearance of the flight.

The Wall Street Journal quotes a spokeswoman for the French prosecutor’s office as having said, “We’ve been asking for information from the Malaysians for a long time.”

"Now that the French have invited the Malaysians to participate in the examination of the wing, the French judge expects information from Malaysia about its criminal investigation into the flight’s disappearance.”

It refers to the evasiveness of the Malaysian authorities and to the frustration that has caused other governments with an interest in solving the riddle of the missing flight, but doesn’t refer to Australia by name, where the policy setting is to be obsequious to the government in Kuala Lumpur and dare not question anything, even though Razak misled Australia over what Malaysia knew about the crash from day one.

Significantly, deputy public prosecutor Serge Mackowiak said forensic tests would be conducted on a suitcase part found on the shores of the Indian Ocean island, near Mauritius. This must be more than troubling in Kuala Lumpur, since in French law the public prosecutors don’t have to be diplomatic to anyone nor follow the protocols of formal air accident investigations. They may, as the Marseille public prosecutor did in March concerning the Germanwings crash — a murder-suicide killing all 150 people on board — let it all hang out when it comes to telling the truth.

With the French authorities now on the case, what Malaysian authorities faced this morning, when Prime Minister Najib Razak spoke to an almost empty room, is loss of control over the narrative — and that’s a narrative flawed by outright lies and evasions from the government of Malaysia and its civil aviation authority.

Razak may have been guided by a PR strategy to appear to remain in control of events by being first to announce that the recovered flaperon was not just a part unique to all Boeing 777s,  but specifically linkable to the 777 that flew MH370.

In 2014 Malaysia misled search partners looking for MH370 for a full 11 days when Kuala Lumpur insisted that the search be extended further into the South China Sea and as far as Kazakhstan when according to its then-acting minister for transport Hishammuddin Hussein, the cabinet knew the jet had flown westwards across the Malay Peninsula on the morning it disappeared from air traffic control radar while over the Gulf of Thailand.

Razak’s posturing will be on trial in France, and the lies, evasions and inconsistencies in the official narrative will be under arguably as much pressure as the integrity of its government over the public investment funds scandal that has concurrently broken out in Kuala Lumpur. - msn.com/en-au/news/