Although Putrajaya's economic transformation programme is seen as an unpopular move, Prime Minister Datuk Seri Najib Razak today said that sooner or later, Malaysians would realise that it could save the country from financial troubles.

Najib said the revenue from the economic transformation programme, such as subsidy rationalisation and the goods and services tax (GST), could absorb expenditure with the declining value of the ringgit and falling oil prices.Continue reading here...

"We are in Malaysia today, our position is stronger than during the Asian Financial Crisis. We have learnt from it," Najib said in his speech during an event in Putrajaya today.

This is today. There is no more George Soros. You are the PM now - for six painful years.  Why is our Ringgit at RM4.27 to the Dollar?

"Just imagine, our deficit is at 6.7%. Of course, our room is limited.  “Imagine if we do not reduce oil subsidies, for example, we would have to use RM20 billion a year to absorb subsidies and it will add on to the burden.

Just imagine, who is the bangsat who created the 6.7% deficit? Which bangsat has been PM for six painful years?  If you have saved RM20 b a year in oil subsidies then why are you forcing Petronas to pay that RM26 Billion "compulsory" dividend this year? Petronas has to pay out of their reserves and borrowings, especially that RM5 Billion sukuk recently. Ini business model style apa pula?

The moron does not seem able to control walruses.

Exactly. The gomen can easily operate on half or one third of the annual budget. Because cronies overprice all the crony  projects three or four times market prices. If you get rid of crony contracts the gomen can save billions in expenditure. We will not need GST.

On Monday, Najib defended the tax, saying that Malaysia was fortunate to have GST to generate revenue as the country needed money to cover its expenses.     He said that national earnings from oil exports and Petronas dividends were down because of the fall in energy prices, adding that without the 6% GST, Malaysia would be financially pressured.

Confirmed this guy is an @$$hole. 'without 6% Malaysia would be financially pressured.." ? He is talking about billions wasted, including that RM42 Billion that has gone poof. I say moron what about the rakyat? The GST has caused the rakyat to suffer price rises of 15% or more for products. The people are financially over pressured everyday when they wake up in the morning. The moron continues:

Leave the people alone. They know how to cover their expenses. You need the GST  to cover YOUR expenses ? Everyone knows that.

The ringgit has been Asia's worst performer in the past one year, with many attributing its poor performance to worsening global outlook, China's surprise devaluation of the yuan, plunging commodity prices and the current political scandal linked to Najib.

The ringgit rout continued as markets opened today, falling to a record low of 3.08 against the Singapore dollar. The currency is also at a 17-year low against the greenback, opening this morning at 4.2630 per US dollar. – August 25, 2015. - syedsoutsidethebox

1. Dato’ Sri Najib and his supporters should stop trying to convince Malaysians that the 2.6 billion Ringgit in his private account is a donation.

2. No one believes or can believe such a huge sum of money can be donated by anyone to Dato’ Sri Najib or to anyone for whatever reason.

4. Saying that it is because of Malaysia’s moderation in Islam is equally absurd as Malaysia had never been extreme in its practice of Islam.

6. The new DPM says he has seen the Arab who gave the money. Then let him give proof that this Arab has huge sums of money to give away to Malaysia and many other countries. Which countries?. What is the source of this money?. What business does he do? What is the name of the bank he uses? Show his account in the bank, the cheques he issued, particularly the 700 million USD. The recipient bank should be holding these cheques.

7. All these information could have been verified by the task force of four. But Najib dismantled the task force by sacking the A.G., sending the head of MACC on leave, and accusing Bank Negara of leaking Government secrets.

8. Now the MACC is said to be still investigating the 2.6 billion. It is an emasculated MACC. If Najib is serious about investigating his 2.6 billion Ringgit in Ambank, he should reconstitute the original tasks force. A new task force filled with his people has no credibility.

9. Banks have to maintain banking secrecy. But banks are also required to report suspected money laundering. Malaysian banks, Singapore banks, Swiss banks and American banks must not keep secret their business with money suspected of being stolen. What have they done?

10. When stolen money is put through banks, the objective is to make it legal, to launder it. Yet the money has disappeared from Ambank because the account was closed.

11. When the account is closed, it cannot mean that the huge amount of money is taken out in cash. It must have been transferred to another bank. Yet we don’t hear of any bank anywhere reporting this money is with them. Two accounts are reported to be frozen in Singapore. Is that all. Surely the holder of the account should be investigated. But so far nothing is heard. Do the banks get to keep the money! If it is not reported to the authorities for action to be taken, then effectively the money has been laundered.

12. If this is so then why have banks to scrutinise large amounts of money deposited with it. They might as well not scrutinise if the suspiciously huge amount of money, the subject of much controversy is just retained by them.

13. The public has a right to know because the public does not believe that the 2.6 billion Ringgit was a gift personally to the PM of Malaysia for him to win elections. Malaysians would not like to believe their candidate for the highest office in the country is a nominee of some person from another country. What will be his obligation to his supporters. Will he serve Malaysians or some foreign country.

This is despite the Malaysian Anti-Corruption Commission (MACC) declaring that the money was a donation and was not linked to 1MDB.

“I think it has something to do with 1MDB despite the explanation that it was a donation," said Mahathir in an interview with the Financial Times published today.

Mahathir also reiterated that no one could believe that the large sum of funds was actually a donation.

In the interview, Mahathir expressed confidence that Najib will eventually be forced to relinquish power.

"I think at some stage he has to go because today he has undermined the legal system," he said, making reference to apparent attempts to scuttle investigations into the RM2.6 billion and 1MDB. Continue reading here... 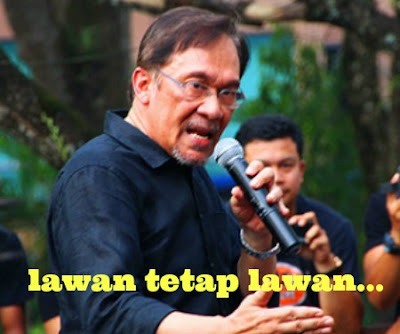