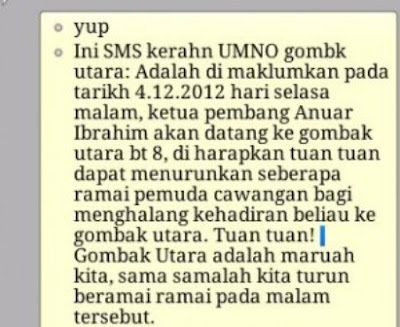 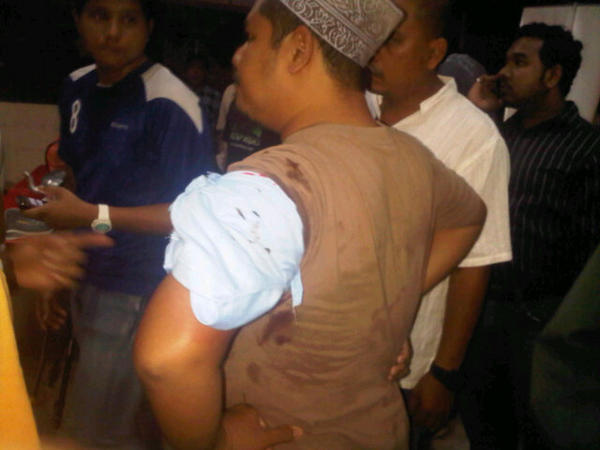 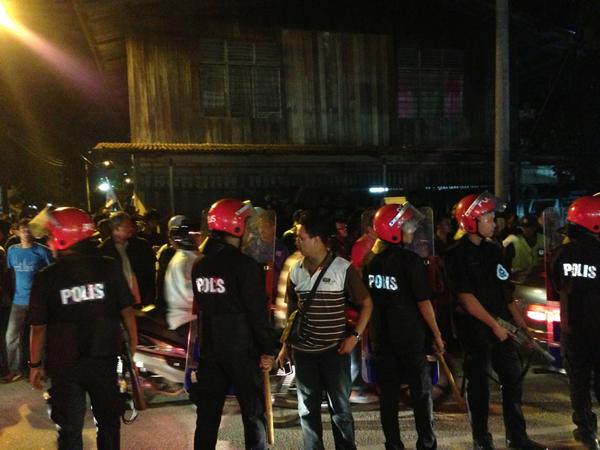 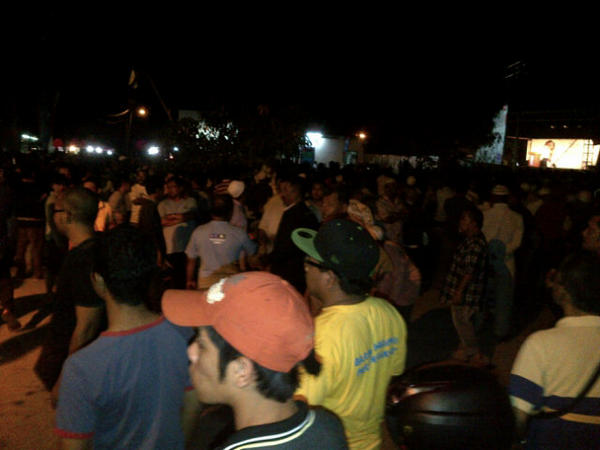 
Two supporters of Pakatan Rakyat and one BN backer were injured in a scuffle in Gombak last night, during a ceramah by PKR de facto leader Anwar Ibrahim.

PKR organ Keadilan Daily said one victim was wounded on the left shoulder with a kerambit - a small knife with a curved blade.

"It occurred when a group of Umno thugs - some of them carrying BN flags - disrupted a ceramah at Dataran Sharuddin, Batu 8 1/2," the report states.

"Some of the group were supposedly silat practitioners. Besides making noise (and) using foul language, they also threw stones at the venue."

Pro-Pakatan blogger SharpShooter claimed that the Air Panas PAS branch chief suffered an injury to his head after a flower pot was thrown at him.

In a tweet this morning, Umno Youth head Khairy Jamaluddin raised a question as to who had started the provocation.

He posted a photograph showing a Malay man bleeding from cuts on his face. He was wearing a BN t-shirt and vest.

Pro-Umno bloggers such as KLXpress have claimed that it was Pakatan supporters who had triggered the violence.

"After some early provocation, they attacked by throwing stones at our youths, some 500 who had gathered here," Gombak Umno Youth chief Megat Zulkarnain said in a video interview with KLpos.com

"One was seriously injured on the head and was rushed to hospital."

Megat also said the group would have had no issues with the ceramah if Anwar had spoken on the future direction of the country, but that they had to defend slander against their leaders.

(Malaysian Joe - It was a PKR ceramah and what the hell are your Umno Youth thugs doing there? Was there any disruption at the various "ceramah's" of Umno/Bn where Pakatan Bashing is a norm? Was there any Pakatan supporters at the Umno assembly when all and sundry ( including the kitchen sink) were being hurled at PKR, PAS and DAP? Khairi Jamaluddin please do not under-estimate the intelligence of the Public. They know the difference between a true Oxford Grad and the back door products!)

'Police must probe this'

Anwar condemned the incident during his speech, but urged supporters not to respond in kind.

"If they (the police) do not take action, I will personally look for the Gombak police chief," he was quoted as saying in urging an investigation into the attack.

In a statement this morning, Gombak PKR division deputy chief Amirudin Shari also condemned the assault and called for Umno Youth to be held responsible for the violence.

He said the Gombak Pakatan leadership had lodged a police report on Monday at the Gombak police station, after being informed that text-messages had been circulated urging Gombak Umno Youth to disrupt the ceramah.

"Unfortunately more than 100 people from Umno Youth came to provoke and disturb the ceramah until the situation became tense and a scuffle broke out in front of the venue," he claimed.

"The assault and the throwing of stones, started by Umno Youth, reflects the attitude and the thuggish culture deep-rooted in (the party)."

Amirudin, who is the Batu Cave assemblyperson, urged the police to immediately investigate the incident and act against the perpetrators.

This is the fifth incident of violence this year at events where Anwar has been present.

In January, three homemade bombs exploded outside the Kuala Lumpur Court Complex before Anwar was due to address supporters after his Sodomy II trial verdict. Two people sustained injuries.

In the following month in Alor Gajah, Malacca, a ceramah was marred by a fracas involving Umno and BN supporters.

About a week later in Sembrong, Johor, Umno supporters reportedly hurled stones, firecrackers and other projectiles at Anwar's car, damaging the windscreen.

This resulted in at least three injuries on both sides, with one being a 12-year-old girl.-malaysiakini 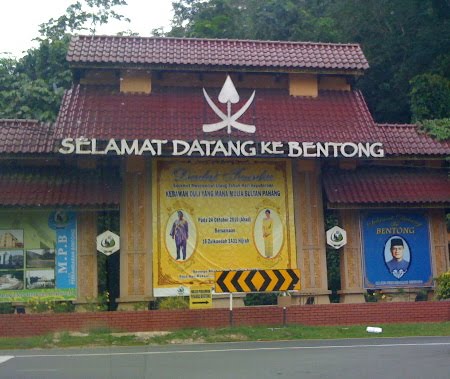 "I tell you, DAP cannot win in Bentong. Cannot win! If DAP wins in Bentong, you cut my ears and I’d jump into the Pahang river." Even though the challenge was rather too tough, Pahang Menteri Besar Adnan Yaakob told a truth here.

He said that if MCA deputy president Datuk Seri Liow Tiong Lai loses in Bentong, the MCA will be finished and should "close shop". Pahang is the assessment indicator for the success and failure of the MCA. He was, however, wrong. The assessment indicator should be in Bentong instead of Pahang. The BN lost the Kuantan and Indera Mahkota for the first time in the 2008 general election.

Bentong has been a stronghold of the MCA and the party has never lost it. On March 21, 1989, the then Bentong Member of Parliament and MCA Vice President Tan Sri Chan Siong Sun died of heart disease when playing badminton, leading to a by-election in Bentong.

At that time, Umno's infighting had not been resolved while the judicial crisis was hitting the party.

Tengku Razaleigh Hamzah had joined the opposition coalition and boosted the coalition's morale. 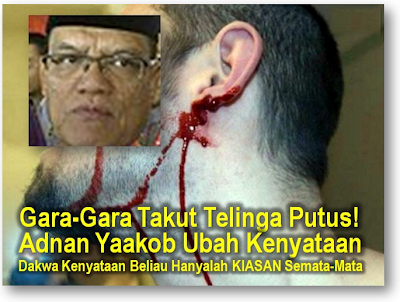 Meanwhile, the MCA was acting gingerly under the strong wind of anti-incumbent and thus, it fielded Tan Sri Lim Ah Lek, who was carrying a good image.

Lim was born to a wealthy family in Kuantan in 1942. He joined the MCA in 1967 and had been a Pahang state executive councilor from 1974 to 1989. In other words, Lim resigned from his state exco post and contested in the by-election.

In such a situation, the Bentong by-election was very worth-seeing and it was also a main battle between the BN and the opposition coalition before the 1990 general election.

I was young at that time and together with a few colleagues, we went to Bentong to cover the by-election.

Communication technology was backward 23 years ago. Candidates fought for votes through ceramah and direct contact with voters. DAP's ceramah in Chinese new villagers had received great responses and villagers enjoyed listening to DAP leaders' criticisms on the government. DAP would sure win based on the responses from Chinese new villagers. However, Malay votes must be counted.

Under the attack of the DAP, Lim took a handshake strategy. He shook hands with any persons he met, regardless of whether the person was a voter or not. Such a gentle and polite attitude had won him good impression compared to DAP leaders whose speech was offensive for some people.

As a result, Lim beat the opposition and three other independent candidates with 8,506 of majority votes, even more than the 6, 722 majority votes won by Chan Siong Sun in the 1986 general election. Lim was then appointed the Human Resources Minister and later a Vice President of the MCA.

After Lim's retirement, he was succeeded by Datuk Seri Liow Tiong Lai. Liow had been elected as Bentong MP for three times and he gained a 12,549 majority votes in the 2008 general election.

Bentong is a blessed land of the MCA and no political storm has ever stricken Bentong. There was a rumoured fatalism saying that the Health Minister position will always put an end to MCA leaders' political career, Liow, however, was still blessed in Bentong in the last election.

Bentong is a mixed constituency, with 26,835 or 46.6% of Chinese voters, and 24,224 or 42.1% of Malay voters. The current Lynas rare-earth refinery issue has greatly affected the Chinese.

If Malay voters remain, the MCA would still be able to keep Bentong. The MCA might only have its underpants left if it loses Bentong this time.

There are various issues to be faced by the MCA in the next general election, such as the implementation of AES, cyanide gold-mining and the Kuantan independent high school. Would the MCA still be blessed? - Lim Sue Goan,Sin Chew Daily 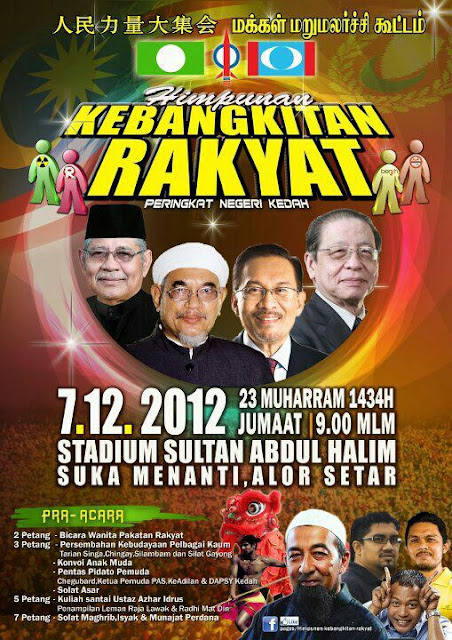 VEN. ASHIN INDAKA (MYANMAR MONK) TO BE A MILLIONAIRE
Ven. Dr. Ashin Indaka (Myanmar Buddhist Monk) or who is cheated devotee money about who want to become a monk; it is needed to pay RM400 per person. Each year more than 100 people become monks on Chinese New Year (Rm400 X 100people=Rm40, 000.00), then he spends 5 years in Malaysia (Rm40000.00 x 6 years=Rm240000.00) and total another income (donation) about Million MR (Malaysia Ringgit). This is news by MEMBERS OF SAMNAK SAMBODHI BUDDHIST TEMPLE (No: 19 Jalan 38 Taman Desa Jaya, Kepong 52100 Kuala Lumpur, Malaysia)

Respect to people of Malaysia,
Likely, we are told that the Myanmar monks mostly false teaching, many impress notions which are not right, play girl, cheating of the public money and others.

Hope all people; especially Malaysians must far away Myanmar's monks. We hope more Malaysia’s Government also noted that the wages of Buddhist monks from the other countries, so that the Malaysian and country can be saved. Thank you