Bala -"I had earlier the night before been taken to meet Nazim Razak (Najib's brother)"...

The man who claimed to have been coerced to reverse his sworn testimony linking then deputy prime minister Najib Razak with murdered Mongolian woman Altantuya Shaaribuu, said he was please that the truth had finally emerged.

Private investigator P Balasubramaniam said carpet trader Deepak Jaikishan (left), who was involved in getting him to reverse his statutory declaration (SD), did "the correct thing".

In an email response to Malaysiakini over Deepak's about-turn, Balasubramaniam urged the carpet trader to reveal everything he knows about the sordid affair.

"I would like him to confirm who exactly put him up to all this and exactly who were the individuals involved from the beginning to the end," said Balasubramaniam, who has been living in exile with his family in India for three years since he fled the country after signing the second SD.

Deepak, in an interview with Malaysiakini early this week, said his participation in the conspiracy was due to a request from a "female friend" associated with the parties who would be affected by the fallout of Balasubramaniam's original statutory declaration.

Meanwhile, Balasubramaniam (right) added he wanted to know who the lawyer who allegedly drafted the second SD, which he said was prepared without his "knowledge or input".

"The question is who did it? No one interviewed me before preparing that second SD. It was prepared without my knowledge or input. I would like to find out who this lawyer is."

The following is Balasubramaniam's email response to Malaysiakini.

Malaysiakini: Deepak has more or less confirmed his involvement in your second SD case. Do you feel vindicated?

Balasubramaniam: I am pleased that Deepak has finally come out and told the truth. Now perhaps everyone will believe what I have been saying for the past three years.

I was asked to sign that second SD when I was being held in a room at the Hilton Hotel, Kuala Lumpur, on the night of July 4, 2008, while my wife and children were being intimidated by members of the military intelligence.

I had earlier the night before been taken to meet Nazim Razak (brother of then deputy prime minister Najib) at the Volkswagen showroom in The Curve, Damansara. He basically warned me to follow Deepak's instructions if I loved my family and wanted them to be safe.

I did not read that second SD. I was just asked to sign it and was told everything would be okay.

I don't know who prepared that second SD but it must have been a lawyer the way it was written. I did not see any other lawyer that night. The only lawyer I saw was (M) Arunampalam () in the morning at the Prince Hotel. Deepak has confirmed Arunampalam did not prepare that second SD.

The question is who did it? No one interviewed me before preparing that second SD. It was prepared without my knowledge or input. I would like to find out who this lawyer is.

According to Deepak, he never got any money from you or your lawyer. Your response?

That is true. This payment of RM100,000 was made in cash into my wife's account in KL by a friend of Deepak. After the payment had been made, he emailed me the paying-in slip.

This payment, plus the apartment at Berjaya Times Square, was supposed to be for a media statement I was asked to release just before the Sarawak elections in April 2011.

I have a copy of the S&P (sales and purchase) agreement for this apartment in my wife's name. This agreement was again prepared by the lawyer, Arunampalam.

The script for this media statement had been prepared by Deepak. It was full of lies and implicated my lawyer Americk Sidhu for accepting money from (PKR leader) Anwar Ibrahim to concoct the first SD.

It was never my intention to release this media statement. I had been advised by my lawyer to play along with this scheme and to gather evidence against Deepak.

At the last moment, I told Deepak I would not release this statement. He got very angry and called me a ‘sodomite'. I have this telephone conversation recorded.

My wife did not sign the S&P agreement for the Berjaya Times Square apartment (right). I instructed my lawyer to write to Deepak asking to return the RM100,000 to him.

My lawyer received no response so he sent a reminder. Still no response. So Deepak is correct in saying this RM100,000 was never returned to him. It is still sitting in my wife's account.

If Deepak confirms he is the one who banked in this cash into my wife's account, I will gladly return this dirty money to him. At the same time, I will lodge another report with the MACC (Malaysian Anti-Corruption Commission).

What would you advise Deepak to do?

I think what Deepak is doing at the moment is the correct thing. Eventually the truth will emerge. I would like him to confirm who exactly put him up to all this and exactly who were the individuals involved from the beginning to the end.

Perhaps he will now achieve some inner peace for what he has done to me and my family. I want to return to Malaysia to carry on with my life without fear for my safety and the safety of my family.-malaysiakini.

Najib should explain, not Zahid...

It is not Umno vice president Zahid Hamidi who should be handling allegations by businessman Deepak Jaikishan related to Prime Minister Najib Abdul Razak's family, but the PM himself, the DAP insisted.

Party veteran Lim Kit Siang was responding in a statement yesterday to Zahid's remark that he would address the allegations during his winding up speech at the Umno AGM today.

"It is not Zahid but Najib himself who should be responding in his winding-up speech at the 66th Umno general assembly tomorrow.

"As Najib is not only around (at the AGM), but as chief of the pack in Umno, he should respond as whatever Zahid could say would only be hearsay with neither credibility nor legitimacy," said Lim.

He cited three reasons why Najib should provide the explanations.

"Firstly, Deepak's allegations pertain to Najib's (right) family, that he had paid an undisclosed sum for the premier's intervention to allow him to come in as a party in a RM100 million defence ministry project in 2005 when Najib was the defence minister - stitching a deal with a Selangor Umno Wanita leader's company where he would participate as a third party in the project.

Standing up to one's words
"Secondly, the Deepak connection with the high-profile and long-running Mongolian Altantuya Shaariibuu murder case... Again, Zahid's response to Deepak's allegation cannot be satisfactory as only Najib is in a position to respond with any credibility," he said.

Thirdly, said Lim, it was an "acid test" of Najib's boast at the latter's presidential address at the AGM of BN's success in governing the nation as "one of which is the efficacy of national institutions".

Yesterday Malaysiakini had asked Zahid (left), who is also defence minister, his ministry's response to Deepak's allegations that the latter had paid Najib's family an undisclosed sum for the premier's intervention to allow him to come in as a party in a ministry project.

Lim said: "Is Najib prepared to fully vindicate himself, his government and the country by subjecting himself to a full and independent public inquiry into the sordid Deepak/Bala/Altantuya scandals and announce it at the Umno general assembly winding-up...?

"If Najib is prepared to submit himself to a full and independent public inquiry ... his apology in his Umno presidential speech on behalf of the Umno leadership for any ‘mistake' or ‘oversight' would be a bona fide one.

"If not, his apology' is just mere rhetoric," said Lim.-malaysiakini 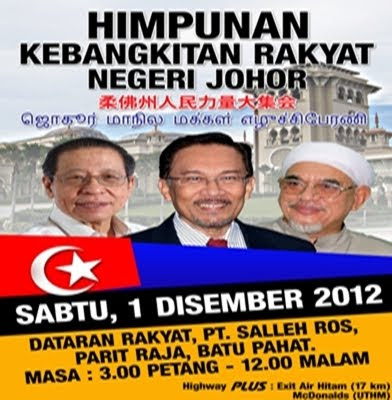