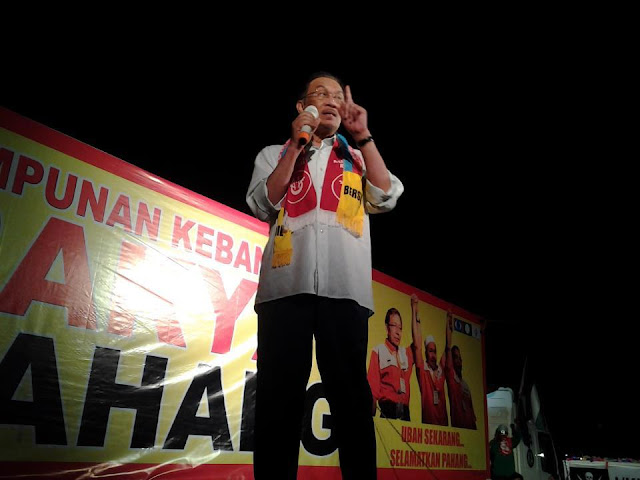 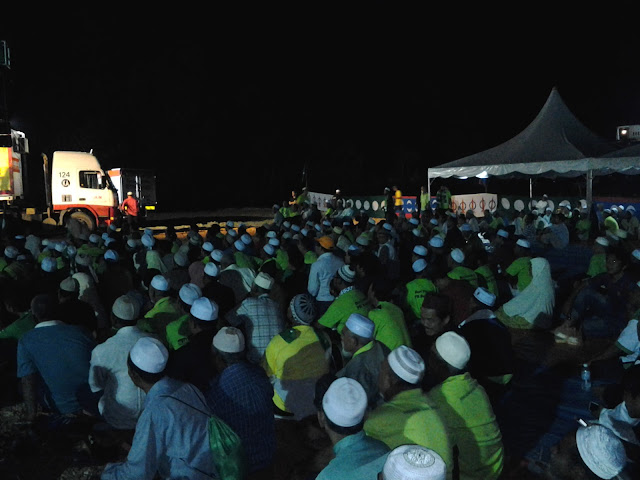 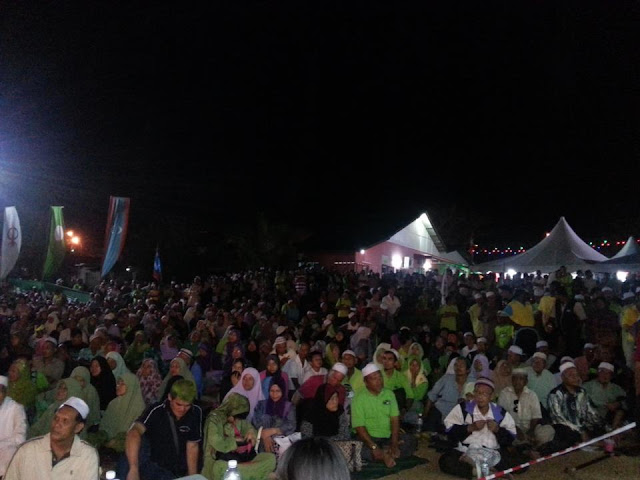 That Prime Minister Najib Razak is oratorically-challenged is patently obvious, and a severe understatement.  The pathetic part is that Najib is determined to delude himself that he is otherwise.  His presidential speech at the recently-concluded UMNO General Assembly was only the latest example.

He confuses ponderousness with deliberateness, equates yelling as emphasizing, and thinks that furrowing his forehead as being in profound thought.  In the hands of a gifted actor, those could be great comedic acts.  Alas, Najib is also far from being that.

I learned early in high school at Kuala Pilah that if I did not know what to do with my hands when delivering a speech, to keep them in my pockets or behind my back.  Do not gesticulate wildly as that would only distract the audience.  Worse, I risked looking like a monkey on speed.  Najib apparently did not learn that at his expensive British school.

As an aside from the personal hygiene perspective, I hoped they sanitized the microphone thoroughly after he spoke; there was an awful amount of spit splattered on it during his delivery. 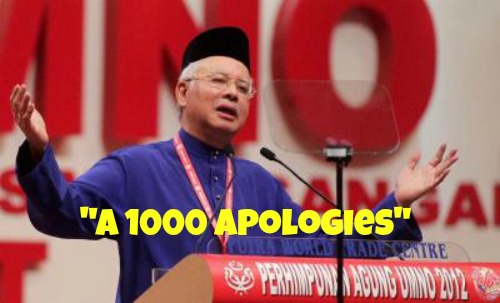 Najib should take comfort in the fact that there are many effective leaders who are neither charismatic nor great orators.  Germany’s Angela Merkel readily comes to mind.  Najib should also be reminded that the converse is even truer.  Leaders with great oratorical gifts and generously endowed charisma can often be among the most corrupt and inept.  Sukarno mesmerized Indonesians with his mercurial personality and spellbound speeches, but that country remained a basket case economically and in many other ways during his presidency.

Had Najib delivered his address in his usual persona, without the put-on gravitas or pretensions of grandeur, he could have finished his nearly hour-long speech in half the time.  Then he and his audience would not have missed their Maghrib prayers.  Besides, there was nothing in Najib’s speech that was so urgent or important to justify that.  As self-professed champions and defenders of Islam, Najib and his fellow UMNO members do not need to be reminded of the importance of prayer.  He and UMNO might need it for the coming election! 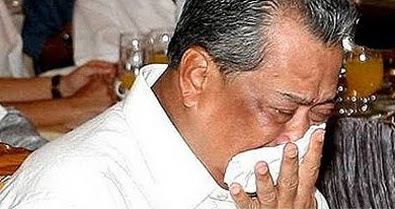 Or perhaps those UMNO folks believed in the canard that their party is God’s choice, and thus dispensed from having to pray.

With all the daunting challenges facing Malays, Najib could come up with only two piddling policy prescriptions:  One, increasing Amanah Ikhtiar Malaysia’s (AIM) loan amount to RM100K from RM50K; and two, reviewing the country’s bankruptcy laws.  This from the leader of a party that purports to champion the Malay cause!

In announcing the loan increase, Najib looked approvingly to Wanita members, and they in turn responded in kind.  Meaning, they were the intended beneficiaries.  I have no problem giving those ladies who are hairdressers or trained pre-school teachers loans so they could start their own beauty salons or kindergartens, but simply by virtue of their being Wanita members would be folly.  Besides, if all you have is some vague idea of starting basket weaving, you do not need such outlandish amounts.

AIM is Malaysia’s government-sponsored version of “micro-credit.”  Muhammad Yunus, its pioneer, would be flabbergasted to know that a loan of RM100K is considered “micro.”  This is yet another example of Najib adopting an otherwise brilliant idea from elsewhere and then screwing it up in the implementation.  AIM’s generous program has degenerated into another massive and lucrative UMNO patronage machinery.

As for reviewing the bankruptcy laws, I would have been reassured had Najib made it part of an overall scheme to encourage economic entrepreneurialism and business risk-taking especially among Malays.  Alas, none of that!  It was prompted simply to rescue the many UMNO leaders who are bankrupt purportedly from guaranteeing loans of their members in return for their support.  With the proposed changes, those local leaders would be spared from bankruptcy, and then they could be their party’s next “winnable” candidates!  Having not learned their lesson, they would then mortgage the country’s future.

What is obvious here is that Najib and the entire UMNO leadership are bereft of ideas.  They are intellectually bankrupt.  The brilliant political cartoonist Zunar captures well this degeneration of UMNO leaders with his latest cartoon, “Evolusi UMNO.” 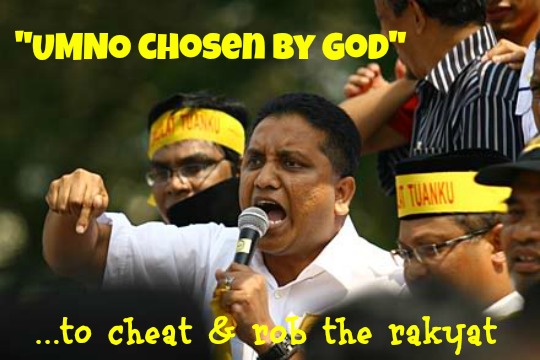 The only remedy for the intellectual bankruptcy of our current leaders is to have an entirely new leadership.

Fully aware what Mahathir did to Abdullah Badawi, Najib heaped profuse praise on the still powerful Mahathir.  It was sucking up performance par excellence!  Najib singled out Mahathir’s commitment of loyalty to leaders, which he (Mahathir) apparently forgot when Abdullah Badawi was in charge.

According to Najib, Mahathir had impressed upon UMNO members the importance of loyalty to leaders, presumably in contrast to fidelity to principles.  Najib readily or more accurately, desperately hung on to that!  These UMNO leaders are nothing but opportunistic characters, modern-day Hang Tuahs.

In his speech Najib was like a little kid desperately seeking approval and relishing praises from grown-ups.  Apart from gushingly citing Mahathir’s approbation, Najib reminded his audience of IMF’s Christine Legard’s praise for Malaysia’s “gravity-defying” economic performance.  Najib needs to be reminded that the IMF, World Bank, and other “respected” international bodies were running out of superlatives to describe the country’s economic stewardship right up to the day before the 1997 Asian economic contagion.

When he was not consumed with sucking up and seeking approval, Najib was obsessed with demonizing the opposition, in particular its leader Anwar Ibrahim.  Najib feigned disgust at Anwar’s alleged crime, for which he was jailed but subsequently acquitted on appeal.

Najib and others of his ilk conveniently forgot that whatever crime Anwar may have allegedly committed, no one was murdered.  Instead, Anwar suffered a black eye, literally and metaphorically.  Now compare that to the fate of the beautiful young Mongolian lady Altantuya.  She and her unborn child were literally blown to pieces.  The fact that her killers are close to Najib (they were part of his official bodyguard unit) or the explosives used are available only to his department remains unexplained.

Najib smugly let on that he had other “secrets” of Anwar which he (Najib) would unhesitatingly reveal at the opportune time.  Left unsaid are the many secrets of Najib now swirling openly in cyberspace that he has yet to respond.  The biggest remains the tragedy of that poor Mongolian lady.

It is hard to pick which part of Najib’s speech was the most obscene or offensive as there were many vying for the top spot.  His closing remarks must clearly rank high up there.

It is an accepted tradition in Islam that once you have uttered vile words or committed evil deeds, your wuduk (ablution) would be nullified.  You would then have to re-cleanse yourself (take another wuduk) before reciting any dua (supplication) or verse from the Koran.  The reason is clear and obvious:  You cannot invoke Allah’s name when your heart is filled with bile and hate. It makes a mockery of your good niat (intention). 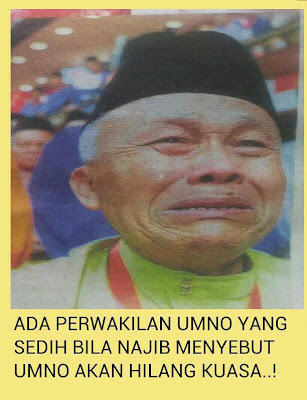 In vilifying the opposition and uttering those ugly words, Najib had committed evil deeds.  I could also add that he had demeaned himself, but then he could not get any lower.

Earlier, UMNO folks were appalled when PAS members, led by their leader Nik Aziz, had a prayer calling for UMNO’s downfall.  Like many, I too was utterly repulsed by that vulgar gesture.

Yet there was Najib, frothing at the mouth vilifying the opposition and attributing the most evil of motives to them, and then with his instant put-on piety leading his followers to a recitation of dua calling for Allah’s blessing!  They in turn responded in kind with their collective exuberant “Amen!” and “Allahu Akhbar!” (God is great!).  Only UMNO’s carma (contraction for cari makan – lit. seeking food; fig. opportunistic) ulamas would approve of that.- Bakri Musa