Anwar got an early morning visit from the police..... (Kyodo) - Malaysia's opposition leader Anwar Ibrahim claimed late Monday he could form the government anytime as there are enough support from parliamentarians in the ruling National Front coalition.

"Now I can say for the first time that we are ready to govern the country. We have the numbers," he told a press conference after making a speech to his supporters, which was halted midway by police as it was taken as marking his official return to politics. "Some have had discussions with us but we are not in a hurry," the former deputy prime minister said, adding the opposition prefers to wait until it has a comfortable majority. 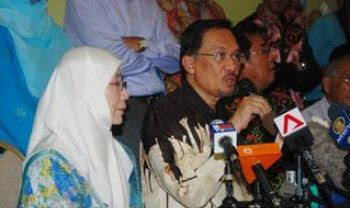 Anwar, 60, who was once relegated to the dustbin of history after he was sacked by then Prime Minister Mahathir Mohamad in 1998 and subsequently jailed for a total of 15 years on corruption and sodomy charges, has made a spectacular comeback after the March 8 general election. He was widely credited with galvanizing the ideologically disparate opposition parties to their best-ever showing in the election, winning 82 seats in the 222-seat Parliament and seizing control of five of Malaysia's 13 state assemblies. His own party, the People's Justice Party, won 31, the most seats among the opposition.

But Anwar was personally barred from running in the election due to his criminal convictions which he has always maintained were cooked up by Mahathir to ruin his political career.

Anwar had spent six years in jail before he was released in 2004, after the court acquitted him of sodomy. Under the Federal Constitution, he could not run for office until five years after his release, a deadline that passed Monday. 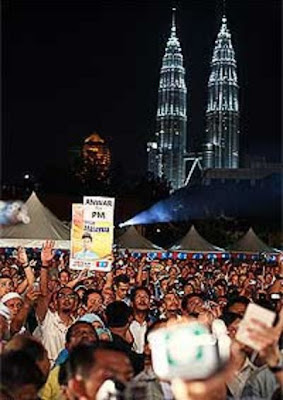 To celebrate the end of the ban, over 10,000 supporters swamped a field in downtown Kuala Lumpur for what has been billed as "Freedom Rally" and to hear Anwar's first public speech after the election. But toward the tail-end of his speech, police suddenly came in to break up the party.

The police had earlier warned of "stern action" against those attending the "illegal gathering." as the organizer did not apply for a permit which is required under the law for any public gathering of more than five persons. Dozens of riot police personnel were on guard around the venue but Anwar's supporters dispersed peacefully. 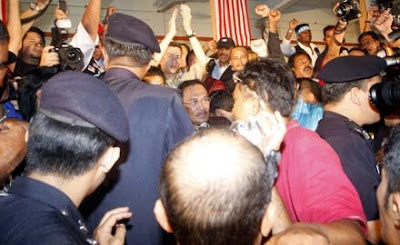 Now that Anwar could seek political office, the question most frequently asked of him is when he would intend to return to parliament and become the next prime minister.

The police this morning visited the homes of PKR leader Anwar Ibrahim, Selangor menteri besar Khalid Ibrahim and party vice-president Azmin Ali over the Black 14 rally in Kampung Baru.A three-member police team arrived at Anwar’s house in Bukit Segambut at about 6.30am to give notice of inquiry to his wife and party president Dr Wan Azizah Wan Ismail on the gathering held to welcome the expiry on the five-year political ban on Anwar.

However, when the police were told that Wan Azizah was unavailable, she was then asked to be present at the Dang Wangi police station at 3.30pm today to give a statement.The police have told her that the statement was relating to an investigation into a gathering which took place without a police permit. 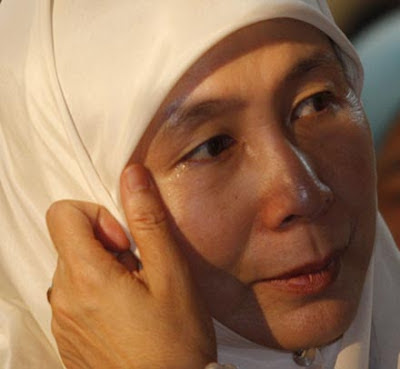 Now I am wondering about those gatherings by UMNO or their agents at Komtar and in Shah Alam recently; were any permits issued by the police? If there were none,why were those leaders not being hauled up?

Probably there are 2 sets of laws here, one for UMNO and the other for the opposition....

All the more reason why we have to get the right government in and reform the police. They know which side their roti canai is curried.