Unite in the people’s service....

IT seems that several politicians from the ruling coalition are still seething from the fact that they lost four states to the People’s Alliance (PA) – the PKR-PAS-DAP pact – as well as their failure to recapture Kelantan.

From calls to looking for alternative ways to channel funds to these states, by-passing the new state governments, to terminating federal funding altogether, it seems that these sore losers are now channelling their anger and disappointment to the voters of Perak, Selangor, Penang, Kedah and Kelantan. Funny that they are using our hard-earned money to blackmail us!

The latest salvo comes from Tourism Minister Datuk Seri Azalina Othman, who had last Wednesday declared that all tourism memorandums of understanding (MoUs) between the federal government and PA-held states would be terminated.

This, said Azalina, was in line with the termination of Tourism Action Councils in these states, which had been chaired by Barisan Nasional (BN) state executive councillors.

Jumping the gun, she went on a preconceived notion that the federal and new state governments would not be able to work together.

Now, Azalina’s remarks seem to be contradictory to those of the prime minister who a day later said that the federal government would honour all its commitments to states held by the PA.

So was the termination of the MoUs a well-deliberated decision of the cabinet or was it a knee-jerk reaction of a politician guided by partisan instincts?

In either case, the message this decision sends is simply that "if you vote for the opposition, you will pay the price".

And if this is the mode the ruling coalition – which still got the people’s mandate albeit by a far reduced majority – is going to operate for the next four to five years, they are only likely to further alienate an already disillusioned electorate.

Now, it is time for both the BN and the PA to close ranks and work together for the greater good of the people who put them in power at both the federal and state levels.

But I don’t suspect that anything will change, at least where the tourism MoUs are concerned. From her days as Youth and Sports Minister, Azalina has built a reputation as a big spender who pays scant attention to dissenting opinions, treating them with contempt.

She has even declared that it would be better to place their own people at key tourism positions – something that she has deftly done at her previous ministry which saw kaki bangkus suddenly being experts at sports!

Meanwhile, the Malaysia Tourism Promotions Board, of which Azalina is chairman, sees some familiar faces from her stint in the Sports Advisory Panel, including prominent names behind the ill-conceived and failed High Performance Training Centre in Brickendonbury, London which cost Malaysian taxpayers at least RM2 million in agents’ fees alone.

With Azalina helming another cash-rich ministry, one hopes that this time, prudence and care for public money will be the motto of the new minister for tourism.

But one suspects that old habits die hard. Already much has been spent on relocating her office from PWTC to Putrajaya. Sigh!

(Terence is not very optimistic that some BN leaders have learnt anything from the recent polls. He is deputy news editor of the Sun.) 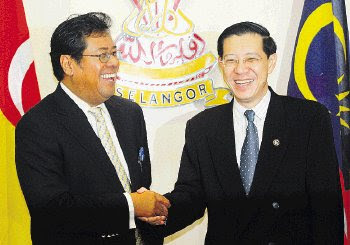 In response to Azalina's action to do away with all tourism memorandums of understanding (MoUs) between the federal government and PA-held states be terminated. Here is what the Selangor MB,Khalid Ibrahim and the Penang CM,Lim Guan Eng got to say.......

The Selangor Menteri Besar Khalid Ibrahim,said, "We're very curious as to why the minister wants to take it out on tourists if she is unhappy with the results in the elections," he said."We feel that this action is not well thought out and I don't think it is in the national interest especially that of the people."

While the Penang CM,Lim Guan Eng said the decision is contradictory to Prime Minister Abdullah Ahmad Badawi's assurance that all federal programmes would run as planned, without any changes, after the two met in Putrajaya last Thursday. "We hope (Azalina's decision) can be reconsidered so it does not give the wrong impression that this is only being done because (BN wants to show what happens) when people make their choice," Lim said.

So you see how stupid is our gomen minister who always treats the opposition as a foe and has the preconceived notion that these opposition gomen will never work hand in hand with them. Why is the gomen too scared to share knowledge with the oppositions?