MGG.Pillai - a champion on free and unmolested journalistic freedom.... 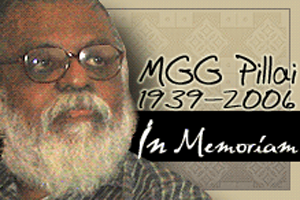 How I wished to see MGG.Pillai had lived on to see the aftermath of the March 8th 2008, 12th. General Election. I think Mr.Pillai would be the first person to post a thought-provoking missals on the net to celebrates the opposition success.

In one of MGG.Pillai commentary view he wrote, "In Malaysia, a middle class man united the people against the government. But the sacked deputy prime minister, Dato' Seri Anwar Ibrahim, could not do it alone. The government, then led by Tun Mahathir Mohamed, could not contain the demonstrations that resulted and used force to break them up. But the middle class leaders went back when Tun Mahathir resigned. UMNO under Pak Lah, who took over, got the biggest majority ever in the general elections of 2004. Datuk Seri Anwar and his men now is not sure he will see the support of those days".

He predicted right and it was the middle class that changed our political landscape that paved the way for opposition success in the 12th General Election. Wilayah Persekutuan, for example, where the middle class folks forms the bulk of its electorate - made up mainly of civil servant,business class, corporate leaders etc,etc.,with a multi-racial background, saw the emergence of Pakatan Rakyat, a cooperation between the three parties,namely PKR,PAS and DAP bagging 10 out 11 seats. If not for the postal votes, the 11th seat of Setiawangsa too will also be swept away by the opposition surged. 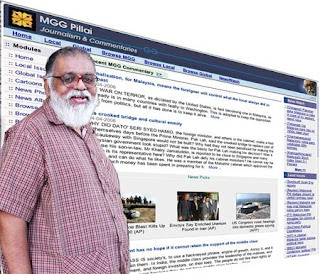 If Mr.Pillai was still around, I yearn that to see how he sees politics unfolding in our nation today, notably with the Lingam video tape episode, the on-going Altantuya's murder case ,the Chua Sooi Lek's sex scandal, Najib's billion dollar arms deals, the murky Balkis Selangor controversy etc, etc, and wonder what will his comments be? Remember, nobody quite writes like MGG. Pillai.

He was one of the greatest believers that Anwar Ibrahim would one day return to the political arena, and how right he was. It will be only a matter of time that we will see Anwar sitting face-face with Pat Lah or probably assuming Pat Lah's role.

I had never met Mr.Pillai before, though I used to adore his writings from way back in the 70's and 80's. However, we do exchange notes via emails occasionally. In one of his email he invited me over a cup of teh tarik in Brickfields but I couldnt make it. I really regretted for missing that golden opportunity, to meet such a great man called MGG.Pillai.

This is the second anniversary of MGG.Pillai’s passing away. His lost was greatly felt by both his friends,foes and the cyber communities alike. I was never a writer before, but was inspired by MGG.Pillai's idealism, beliefs, a hero on free and unmolested journalistic freedom and his style of expression of the oppressed had captivated me.

Thanks MGG.Pillai, I missed you, my dear friend, rest in peace and you were always on my mind.....

(from Elton John's "Candle In The Wind")

Hello !.
You re, I guess , probably very interested to know how one can reach 2000 per day of income .
There is no initial capital needed You may commense to receive yields with as small sum of money as 20-100 dollars.

AimTrust is what you haven`t ever dreamt of such a chance to become rich
The company represents an offshore structure with advanced asset management technologies in production and delivery of pipes for oil and gas.

It is based in Panama with offices around the world.
Do you want to become really rich in short time?
That`s your choice That`s what you wish in the long run!

I feel good, I began to take up real money with the help of this company,
and I invite you to do the same. It`s all about how to select a proper partner who uses your savings in a right way - that`s the AimTrust!.
I make 2G daily, and what I started with was a funny sum of 500 bucks!
It`s easy to start , just click this link http://ilequfymop.ibnsites.com/qytudem.html
and go! Let`s take our chance together to get rid of nastiness of the life

Hello everyone!
I would like to burn a theme at this forum. There is such a nicey, called HYIP, or High Yield Investment Program. It reminds of ponzy-like structure, but in rare cases one may happen to meet a company that really pays up to 2% daily not on invested money, but from real profits.

For quite a long time, I make money with the help of these programs.
I don't have problems with money now, but there are heights that must be conquered . I get now up to 2G a day , and I started with funny 500 bucks.
Right now, I managed to catch a guaranteed variant to make a sharp rise . Turn to my web site to get additional info.