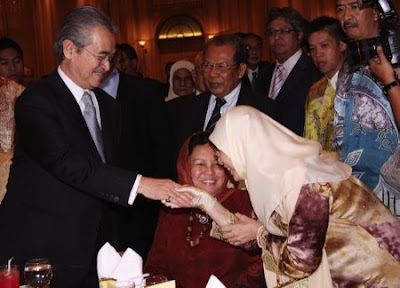 An amazing night when many miracles took place - By Debra Chong

KUALA LUMPUR, April 18 — It was an amazing night at the Bar Council dinner at the JW Marriott Hotel in Jalan Bukit Bintang last night. Many miracles happened. To start off, it was quite a sight to see members of the Barisan Nasional and the Pakatan Rakyat seated at the same tables without kicking up a fuss. Namely, the VVIP table where Prime Minister Datuk Seri Abdullah Ahmad Badawi sat together with political arch-nemesis Wan Azizah Ismail and former Lord President Tun Salleh Abas. One had grown too used to see one or the other lunging for the jugular in public (with the exclusion of Salleh), so much so that seeing them actually being amiable to each other and making small talk was disconcerting.

Then there was the Prime Minister's announcement that he was firmly pushing forward with setting up a Judicial Appointments Commission (JDA) despite the strong objections from his own BN fraternity. It was greeted with thunderous applause and hoots of approval from the 600-strong legal eagles. And finally, his recognition and acknowledgement of the government's role that led to the tragic removal of Salleh, Datuk Seri George Seah and Tan Sri Wan Suleiman Pawanteh from office in 1988 and which plunged the judiciary into an age of darkness, so to speak. Pak Lah's humble tone reached out to them and helped make a bitter pill a little easier to swallow. He said he wouldn't apologise, and didn't but the effort and courage it took him to get to where he was last night spoke volumes what he could not speak baldly in words.

As Zaid Ibrahim, the minister in the prime minister's office who had first mooted for a public apology from the government, put it: “(One) can say sorry in other ways.” Better late than never?

The power of that love moved the minds and hearts of the people implicated directly or indirectly, those who suffered the brunt of injustice and those who were collateral damage — the families of the 3 judges rudely removed from office and the other 3 whose good names were besmirched, even though they were later reinstated. 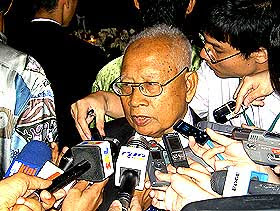 Seah, who is paralysed on his entire right side following a stroke a few years ago, was too ill to make the dinner event. Basil Seah, 39, who came in his father's stead, said: “Personally, I feel it is a step in the right direction, even though it's been 20 years coming. I suppose it's better late than never.

“But his (George's) reaction and mine differ. If I were my father ... if I know my father ... I'd expect only one thing, an apology, a simple apology. But we read in the papers there's not going to be an apology forthcoming, so we were hoping for the next best thing. Now, we'll just wait and see the structure and timing of the goodwill payment. We will not reject the payment,” said the former judge's youngest son. The others, like Seah, thought the prime minister's statement was the next best thing to an actual apology. But for at least 2 Supreme Court judges, Wan Suleiman and Tan Sri Eusoffe Abdoolcader, it was simply too little and too late.

For Siti Nurhayati Mohd Daud, the late Wan Suleiman's wife, it was a very bitter pill to swallow, though swallow she did.

“Although I thank the prime minister, I feel less than satisfied at his decision (not to make a straightforward apology). This is not the end of the story for me. (Without an apology) I don't know, people don't know, that my husband was not guilty. I want my husband's name to be cleared. I feel my husband was innocent. He was an honest judge,” she said.

“Even so, I am thankful that our prime minister cares about us enough (to do this much),” she added.

Wan Suleiman's only child Wan Noor Azli, 25, echoed his mother's sentiments. He recounted how his late father became disillusioned with the judicial system after the incident and, like Salleh, found solace in farming.

“My father was happy to leave the judiciary and said he didn't have to worry about cases anymore,” said Wan Noor Azli, a young legal officer himself who hopes to one day achieve his father's greatness in the judicial field.

For Brenda Lim, 40, and her husband Chow Nai Boon, 47, it awakened very sad memories. Brenda's grandfather Eusoffe was one of the 3 judges who had been suspended but was later reinstated. He died over a decade ago after his wife Haseenah died. Related to Eusoffe on her mother's side (her mother Julie Ong Say Suan is the daughter of Haseenah), it was, to her, justice served too late. 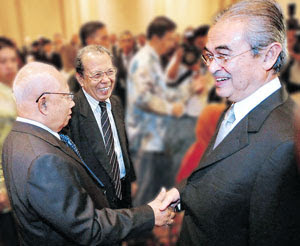 “I wish he was here. He's the main person affected by all this. It's a different case from the others (Salleh and Wan Suleiman) because he was reinstated. It's been 12 years. It should have been solved earlier,” she said, tearing up.

She and Chow remember the year only too well. They were newly married then when the scandal fell on her grandfather. Even so, their memories of Eusoffe were fond; they were very close-knit.

“He was known to be very firm but he was very soft inside. He never mentioned (the details of the judiciary incident) to the rest of the family. He was a very private person, most of the time he kept to himself,” she said.

“He asked everyone to keep mum about this (judicial incident). 'Don't let grandma know about it',” Chow said.

In March 1988, Salleh, the then Lord President, had written to the Yang di-Pertuan Agong on behalf of the judges expressing disappointment with accusations made by then Prime Minister Datuk Seri Dr Mahathir Mohamad (now Tun) against the judiciary. Two months later, Salleh was suspended; and High Court of Malaya Chief Justice Tan Sri Abdul Hamid Omar was appointed acting Lord President.

In August 1988, Salleh was officially removed from his post of Lord President. The five Supreme Court judges who granted Salleh the order: Tan Sri Azmi Kamaruddin, Eusoffe, Tan Sri Wan Hamzah Mohamed Salleh, Wan Suleiman and Seah were suspended. In October, Wan Sulaiman and Seah were sacked while the other 3 judges were reinstated.

Najib today said that no apology was forthcoming for former Lord President Salleh Abas and the five judges affected by the 1988 judicial crisis. "The ex-gratia payment does not tantamount to revisiting whatever that has been decided. It is not to be construed as any form of an apology but this is our way of addressing some of the personal considerations and experiences and hardship they have gone through.

"It should be seen in that light and should not be construed as anything beyond that," said Najib.

Saying sorry is always too difficult for the gomen. However,the Lingam tape episode had thought the gomen a valuable lesson.

Btw. why was not Mahathir invited? I wonder what will he be his comments be......

We have very short memoery.

This man Pak Lah promised you many things in 2004. IPCMC. Corruption. Open Tender & Transparency. and a few more things.

So far nothing. And this speech DOES NOT COME from him or from his heart, it is NOT even written by his usual speech writers.

The words are from Zaid Ibrahim ... you can tell. Only Pak Lah editors must have removed that APOLOGY thing .

Hope little from this man. H eis not an dnver have been a natural leader, he is just a good guy typical of Malay Ustadz gone modern.

What is so bad about a Malay Ustadz? Do you have to stereotype all Malays and all ustadz just because you dislike Pak Lah? My father was an ustadz and there was nothing wrong with him.