The AN WAR that keeps Pat Lah and BN guessing..... 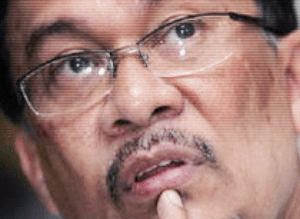 If you think that Anwar is bullshitting about his ability to court BN Sabah and Sarawak MPs to crossover and join Pakatan Rakyat and overthrow the current gomen of Pat Lah, you better think twice.

Ku Li said that he had a chance encounter with Anwar Ibrahim recently. Ku Li said,"I was on the same plane with him (Anwar) and I asked him 'How confident he was that he will form the next government?'. "He smiled and said "I'm very confident" the 71-year-old veteran said.

Ku Li, explained that the opposition's repeated boasts to the media about taking over is not far-fetched at all.” All it takes is 30 members to make the switch and we will have a new federal government," he said. He said many of the MPs were once strong supporters of Anwar Ibrahim and maintained close contact with him. Read here. 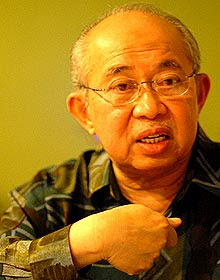 The ongoing defection talks has placed BN on a defensive mood, with Najib saying recently that the ruling coalition will not simply dismiss the threat.Read here.

What further transpired between Ku Li and Anwar is anyone's guess. Probably, Ku Li might have discussed how he could help Anwar to garner enough MPs other than from Sabah and Sarawak to jump ship and take over from Pat Lah. Read here.

For some reason or other, Ku Li can never win UMNO's top post this December, unless with divine intervention. To secure 60 nominations in Pat Lah's backyard is something that's impossible for Ku Li to attain. Ku Li's age factor is another obstacle that might hinders his ambition. UMNO stalwarts would rather go for a much younger candidate. We must also not forget that, Najib, Mahyuddin, Hishamuddin and Ali Rustam are also keen to be in the race.

Anwar is wedging a psychological warfare against BN and each time Anwar opens his mouth, there will obviously be an immediate respond from BN leaders. This is a clear indication that Pat Lah and his BN goons are expressing concern as shivers runs right down their spine.

However, this will not happen in the next couple of months, until Anwar enters Parliament, when and why, only Anwar knows the answer. Anwar also had set a time frame for this to happen. The BN MPs who are waiting to switch knows fully well that they will not jump the ship until and only Anwar's leadership is ascertain.

Anwar has promised that under the Pakatan Rakyat gomen, Sabah and Sarawak will receive an additional boost in petroleum royalties from the current 5% to 20% now. An additional cabinet posts is another form of incentive. This would seem attractive to both Sabah and Sarawak state gomen since there is the perception that the federal gomen is taking more from these states than what it can give back in return.

The situation is extremely complex,rickety and volatile, but one thing is certain, Anwar is in control and he is making all the right moves much to chagrin of his political foes......

While other law makers and their spouses were issued official invitations to attend the opening of the 12th Parliament session by the King Mizan Zainal Abidin tomorrow, Opposition Leader Wan Azizah Wan Ismail (Permatang Pauh-PKR) was not.All she got was a letter. Even then, her husband and de facto PKR leader Anwar Ibrahim was not asked to attend. 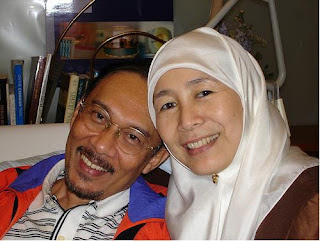 “I would like to ask why,” said Wan Azizah today in a press conference held after the swearing-in ceremony of the 222 Members of Parliament today.

The King Tuanku Mizan Zainal Abidin is scheduled to open the 12th Parliament tomorrow and deliver the royal address.

“We feel disappointed when informed that the Opposition Leader was not invited officially for the opening of Parliament session by the king tomorrow. Only a letter was issued, and her husband was not invited,” said PKR vice-president Mohd Azmin Ali at the press conference.

Azmin, who is PKR MP for Gombak, said the issue has been referred to Parliament secretariat.

“All Members of Parliament received official invitation cards with the (Parliament) emblem and the name of the Member of Parliament together with the wife or husband.

Personally I would prefer it sooner rather than later but I am sure they know what they are doing, what is holding them back and when is the best time?

I have been waiting for this moment eversince that black 2nd september.