Pat Lah ties down Lajim Hj.Okim so that he doesnt “lompat”…… 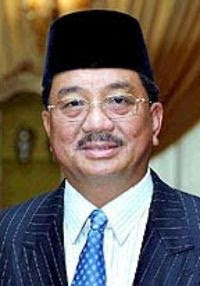 In February 1994,the Sabah PBS gomen faced the GE and won the elections for the 4th successive time but with a reduced majority, i.e. 25 seats as against the BN's 23 seats. Pairin Kitingan had to wait for more than 36 hours outside the Istana gate before he was sworn in as the Chief Minister because of manoeuvering by BN leaders who could not accept the people's democratic verdict.

The 4th term PBS gomen under Pairin Kitingan lasted only about two weeks before it was forced out of power through undemocratic manoeuverings by the BN. The resignation was caused by defections of a majority of PBS assemblymen to BN parties.Chief among them was Lajim Hj.Okim(pic).

Lajim Hj. Okim,the MP for Beaufort is now being appointed as the Deputy Transport Minister.Lajim Hj.Okim used to be the Sabah Deputy Chief Minister. Lajim Hj.Okim is famous for hopping from one party to another. He was the mastermind behind the downfall of the PBS gomen,that brought UMNO to power in Sabah. Pat Lah was wise enough to bring him over to KL than rather allowing him to stay in Sabah, knowing fully well what this guy can really do. At least for now Pat Lah’s mind will more peaceful. 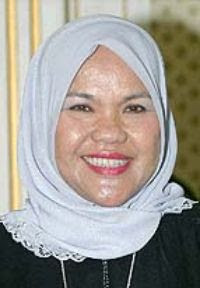 On another note, Pahang assemblywoman and exco member Maznah Mazlan has been appointed the new Deputy Natural Resources and Environment Minister. According to a statement from the PM’s Office, Maznah Mazlan, who currently holds the state seat of Muadzam Shah, will be sworn in as senator soon.

Pat Lah seems to lose direction on his cabinet appointments. After all he has 140 MPs in all, while 86 are from Semenanjung Malaysia, the rest are from Sabah and Sarawak. What was Pat Lah thinking when he appointed this state assemblywoman from Pahang to be a Deputy Minister? Though, her appointment is Pat Lah's prerogative, but cant he choose someone from the current batch of BN/UMNO MPs to fill the post?

No wonder UMNO is so fedup with Pat Lah and wants him to leave, sooner the better…….