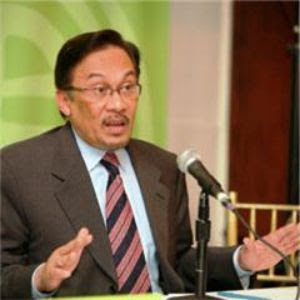 Malaysian police have threatened supporters of politician Anwar Ibrahim with stern action over a planned Monday night rally in Kuala Lumpur to mark the former deputy premier's return to politics, newspapers said. The rally, which police say does not have a permit, is to celebratethe end of a five-year ban on Anwar, 60, taking political office, which expires on Tuesday.

Anwar is widely held to be eyeing the premiership, but has been in the political wilderness since being dumped from the ruling United Malays National Organisation (UNMO) party in 1998.

Here are some key dates in the career of one of Asia's best-known rebel politicians.

Sept 2, 1998 - Sacked from all posts in government after a fallout with then prime minister Mahathir Mohamad.

Sept 3, 1998 - Anwar says he was the victim of a conspiracy at the highest level.

Sept 4, 1998 - UMNO expels Anwar. Mahathir, the party's president, says Anwar is "not suitable" to be leader.

Sept 29, 1998 - Anwar arrives in court with a black eye, saying police beat him unconscious after his arrest. Pleads not guilty to five corruption and four sodomy charges.

Sept 30, 1998 - Anwar pleads not guilty to an additional sodomy charge.

March 8, 2008 - Ban sees Anwar sit out election where opposition coalition of his Keadilan Party and allies capture five of the 13 states. UNMO thrown into disarray, dipping below two-thirds parliamentary majority for first time in four decades.

When Anwar arrived at 8.50pm, there were shouts of reformasi but no untoward incidents. Police, including the Federal Reserve Unit and Light Strike Force patrolled the area but people were allowed to move about freely. There was also a large foreign media presence, including television crew.

Anwar, the PKR adviser, was banned from contesting any elections for five years after his release from jail following his conviction of corruption and abuse of power charges. Tonight, the ban expired and Anwar is legally allowed to be active in electoral politics.During the last general election he went around the country giving ceramah for his party's candidates as well as those from Pas and DAP.

However, when Anwar tried to deliver a speech, a dozen policemen went on stage to stop Anwar on grounds that he was addressing the rally.-AFP Read here,here and here.