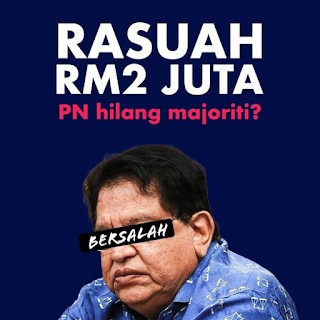 Bekas Menteri Umno/BN, Adnan Mansor, didapati bersalah terima rasuah RM2 juta empat tahun lalu. Dia menyertai bosnya, Mohd Najib Abdul Razak, sebagai "convicted felon" (mengguna pakai label yang diberikan oleh Bernama) berprofil yang kedua.
Dia dituduh menerima sogokan itu daripada seorang tauke pembinaan bernama Chai Kin Kong. Pada 6 Disember dia bebas tapi tidak lepas satu lagi tuduhan rasuah melibatkan RM1 juta, juga dari seorang tauke pembinaan, Tan Eng Boon. Tauke ini telah didapati bersalah kerana bersubahat dengan Adnan dan didenda RM1.5 juta. SPRM sidang siasat semula kes ini.
Semalam Adnan buat kenduri kahwin besar-besaran anaknya tidak jauh dari Istana Kehakiman, Putrajaya. Dia ini adalah Ahli Parlimen Umno/BN bagi Putrajaya. - akj
Another stay of jail sentence and fine?  Only in Malaysia do  the guilty elites crook get exempted and still be free to subvert democracy in the country. Former federal territories minister Tengku Adnan Mansor was sentenced to a year’s jail and fined RM2 million after he was found guilty of accepting RM2 million from businessman Chai Kin Kong four years ago.
Zaini, in his 87-page judgment today, said he was unable to accept that Ku Nan alone was entrusted to raise funds for the two by-elections as these constituencies were not in his domain as the then chairman of Umno and Barisan Nasional Federal Territories chairman. “He was furthermore not the treasurer (of Umno) as claimed. I am also disinclined to accept the testimonies of Rizalman and Zakaria …” the judge said.
Zaini said, in his opinion, their testimonies of Rizalman Mokhtar and Zakaria Dullah, were concocted after the event in an attempt to bolster the defence of the accused. He said it was undoubtedly apparent that the RM2 million given by Chai remained in Tadmansori’s account for the benefit of the accused.
Tengku Adnan has to serve another six months if he fails to pay the fine. He risks being disqualified as Putrajaya MP should he fail to file an appeal. High Court judge Mohamed Zaini Mazlan said corruption could not be condoned and he was inclined to follow precedent to also impose a jail term.
“The accused should not escape after profiting from his crime,” he added. Zaini allowed the application by the defence to stay the jail sentence and fine pending appeal. Now Ku Nan is officially a convicted criminal.
Article 48(1)(e) of the Federal Constitution states that an elected representative is disqualified if he or she is convicted and sentenced to a jail term of two years or more and/or fined RM2,000 and more and has not received a free pardon. - Amin Fasaili 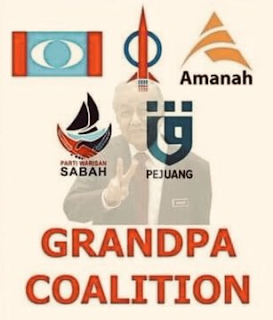 Should PKR join the
proposed grand coalition?...
Lately, there have been calls for the creation of a “grand coalitions”, both for the parties that support the current government and separately, for the parties which are now in opposition. On the opposition side, there have been calls for the revival of the “Harapan Plus” formula.
Broadly, this basically involves Pakatan Harapan - PKR, DAP and Amanah - getting back together with Dr Mahathir Mohamad and his camp (his Pejuang party remains unregistered), as well as presumably other parties like Warisan and Muda (the latter also still unregistered).
Many good and honourable Harapan members or supporters - as well as those in civil society - think this is a good idea. But is it necessarily so? Harapan Plus cannot be led by Mahathir again. What will recreating Harapan Plus entail?
In June 2020, Mahathir was quoted in the media as saying that: “I want to be PM for a third time to rectify the corruption of Najib and Muhyiddin administrations…I'll back down after six months. I won't be PM any more.” In October 2020 too, Pejuang nominated him to be prime minister again.
Also, in his recent Dec 14 press conference, while he reportedly stated that he had “no suggestion” whether he would be a candidate for prime minister or deputy prime minister, he said: "If the government falls, then there will be a need for a new government. At this moment, unless we have a general election, the only way to form a new government is for the 222 MPs to begin to choose the government, perhaps beginning with the prime minister… And then to form a government that is dedicated to serving the people. I hope there are enough MPs who want to see this country recover and develop like before."
This strongly suggests - although I stand to be corrected - that recreating Harapan Plus will involve either accepting Mahathir’s leadership again, or someone acceptable to him. As I and many others have argued previously, this is unfortunately not a viable option - at least for PKR. The sad fact is that Mahathir has proven time and time again that he is unwilling and unable to set in motion the reforms that Malaysia desperately needs, whether economic, political, or social. 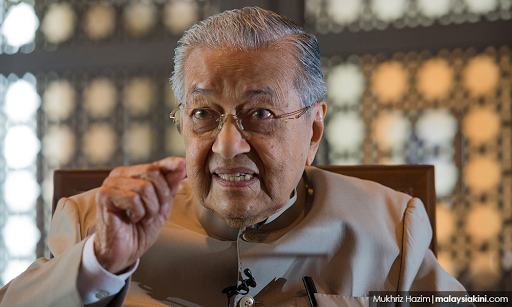 Working with Mahathir under Harapan was not an easy decision. Many suffered tremendously during his first tenure as PM as he destroyed the country’s institutions while the gap between the rich and poor grew.  But it was a judgment call made by Harapan to defeat Najib and Umno-BN in the 2018 election.
Mahathir had 22 months and enormous political capital to rectify our country’s problems- but could not or would not. And as the record will show, he repeatedly denigrated our Buku Harapan manifesto. Much of it was arguably achievable, but his unfortunate comments hurt Harapan’s credibility and strengthened the hands of our foes.
At the end of his tenure, he resigned unilaterally without consultation as a tactic to not have to fulfil his promise of handing over the leadership to Anwar Ibrahim. Instead, the entire Harapan government, which came to power carrying the hopes of many Malaysians, collapsed.
He has undoubtedly reached his limits when it comes to leading Harapan and our country to where both need to go, especially in this rapidly changing, tumultuous Covid-19 era. If our component parties and well-wishers still want Harapan or an enlarged coalition to be a reformist entity - then it cannot be led by Mahathir.
The prospect of a divided opposition will naturally be painful for many. But this simply is a case of differing, irreconcilable visions of what Malaysia’s future ought to be like. There’s no guarantee that Harapan Plus is even Mahathir’s preferred political vehicle moving forward.
In a September 2020 interview, he was quoted as saying that: “If we can get just 30 seats, we will be in a position to join either (coalitions). But if we want to join, we must insist on certain conditions. If they accept our conditions, then we will join.” 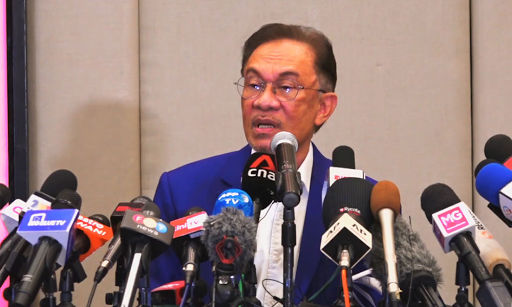 The Nature of coalitions are changing.To be fair though, the Harapan Plus proposal - as currently conceived - is problematic for reasons that go beyond the Anwar-Mahathir dynamic.
Malaysia’s political culture tends to see coalitions as “pre-election coalitions” as opposed to “post-election coalitions”. Parties agree on a common manifesto, with a common leader (or PM candidate) and a single candidate for each seat. But is this a natural state of affairs, really? Could it be that we are just so used to the Alliance and BN "model" that our country was ruled under until 2018 that we cannot think of any alternative?
The opposition tried to respond with the Socialist Front (1950s-1960s), Gagasan Rakyat and Angkatan Perpaduan Ummah (early 1990s), Barisan Alternatif (1999-2008), Pakatan Rakyat (2008-2015), Harapan (established in 2015) and Gagasan Sejahtera (2018).
But we should remember that Parti Bansa Dayak Sarawak (PBDS) cooperated with Parti Pesaka Bumiputera Bersatu (PBB) in the Federal BN but competed against each other at the state level from 1987-1992.
The DAP-PKR cooperation in the 2008 elections was a broad understanding to avoid overlaps in seats and coordinate their campaigns, without a joint-manifesto. Similarly, Warisan adopted a Harapan-friendly understanding without joining it in 2018. PN and BN both contested against each other in the September 2020 Sabah polls but formed the subsequent state government together.
Let us be honest. Given our current political realities and the terribly distorted way our parliamentary constituencies have been drawn, any grand pre-election coalition will struggle with seat negotiations. It has always been a fraught process even when parties are united and have the best feelings towards each other. 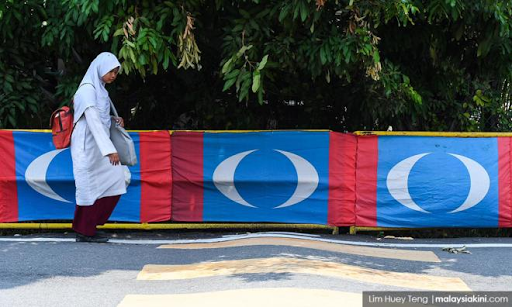 Indeed, this is a problem that will continue to confront, if not metastasise, for any future grand coalition: whether it's Harapan Plus and whatever shape the pro-Muhyiddin alliance takes. Even Mahathir, in his September 2020 remarks, seems to acknowledge that post-election coalitions will become the norm. Perhaps we must stop expecting our coalitions to be permanent entities but more fluid, depending on what the nation needs, to be formalised as a governing coalition after elections.
This is not unusual in Europe. In fact, the “grand coalition” is a phrase used in Germany to describe a coalition formed by the CDU and SPD that happened a few times in history, albeit after elections. In Britain, the Conservatives and Liberal Democrats formed a coalition government from 2010-2015.
This is probably why talk of a Harapan-Umno tie-up in Perak generated so much public attention, although it did not materialise in the end. Malaysian voters, one suspects, may increasingly be curious about - if not open to - new political possibilities previously unthinkable.
PKR must continue to serve all Malaysians. Still, our politics does not have to be at the mercy of expediency, and this is where PKR needs to hold fast to its core ideal of building a fairer Malaysia for all. Yes, forming coalitions must be a flexible process moving forward. But the parameters need to be rooted in reforming Malaysia for the better.
Whatever happens, PKR must continue to serve the people and fight for a fairer economy as well as reforming our country’s public institutions. PKR is the only party with divisions in each of our country’s 222 parliamentary constituencies, whether in the Peninsular, Sabah and Sarawak. It has a membership exceeding one million, behind only two much older parties - Umno and PAS.
As a big-tent party that has encompassed various ideological strands, that has emerged as Malaysia’s most successful multiracial political platform, PKR is well-placed to do so.- Nik Nazmi Nik Ahmad,MP Setiawangsa 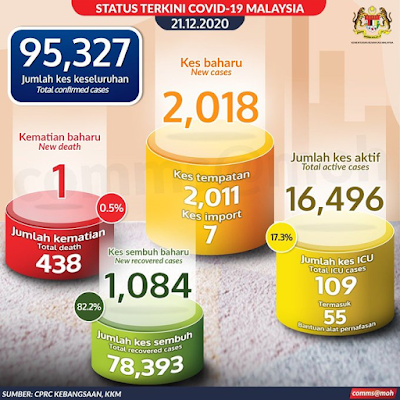