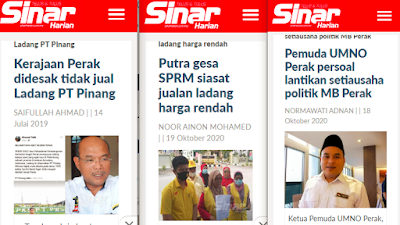 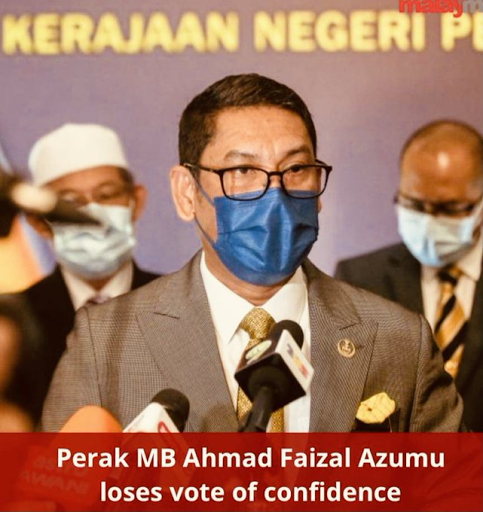 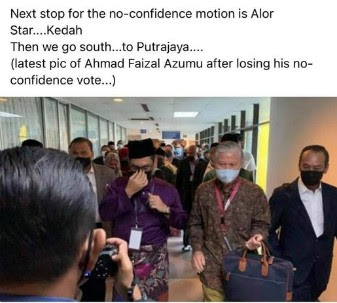 Will Perak trigger a political spillover?...
Now that Perak menteri besar Datuk Seri Ahmad Faizal Azumu has lost the motion of confidence vote in the state assembly, who will be the new MB? And which party will helm the new state government? By convention a menteri besar (and even prime minister for that matter) who has lost a confidence motion (what more a no-confidence one) will have to resign, resulting in the collapse of his government.
In conceding defeat, Ahmad Faizal has promised a smooth transition. According to Perak opposition leader, DAP's Dr Aziz Bari, who is also a law expert, "Even though the administration has fallen, it can still function as a caretaker government, and I believe the Perak Sultan will take this matter into consideration." The next few days will see meetings, discussions and negotiations.
In the 59-seat state assembly, 25 representatives are from Umno, 16 from DAP, five from Bersatu, five from Amanah, three each from PKR and PAS, one from Gerakan, and one independent.
The Gerakan seat is for Buntong held by A. Sivasumbramnai who defected from DAP. The independent assemblyman is Yong Choo Kiong, also a former DAP man. He holds the seat for Tronoh. Both are Perikatan Nasional/Bersatu- friendly. Incidentally, out of the five Bersatu representatives, two crossed over from Umno.
30 seats are needed for a simple majority to form the state government. It's no secret that Umno is at loggerheads (to put it mildly) with Bersatu at state (as well federal) level. And when Umno assemblyman Datuk Abdul Manaf Hashim moved the motion of confidence for Ahmad Faizal, the immediate thinking then was Umno wanted to topple the menteri besar, who is Bersatu deputy president.
What more the motion was accepted by Speaker Mohamad Zahir Abdul Kadir. For the record, Zahir is from Umno.  A confidence motion, as law experts tells us, is the same as a no-confidence motion. Both put the menteri besar to a test in the assembly, and both motions can result in the MB being ousted. 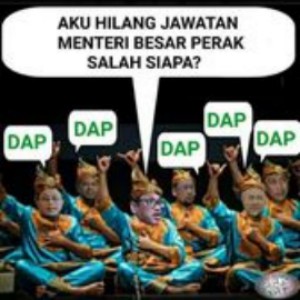 Although a confidence motion seeks to show support, it can be detrimental as in the case of Ahmad Faizal. It is said that Umno knew very well he would not win the motion. But whatever it is, we have now a situation where Umno is short of only five seats to from the state government with a simple majority. The question is, where will the crucial seats come from?
Will Umno work with Pakatan Harapan? DAP, PKR and Amanah have a combined seats of 24. PAS is working with Bersatu, obviously comfortable in Perikatan Nasional.
For the confidence motion, PAS voted in support. Taking that into perspective, it can be seen that PAS has broken ranks with Umno, at least at the state level. Muafakat Nasional could have been severed In Perak. Is that the situation?
Umno has managed to oust Tan Sri Muhyiddin Yassin's No. 2 man. Will this have a big effect on Bersatu-Umno ties at national level? Can this be seen as the start of an Umno mutiny against Bersatu/Perikatan Nasional? Is Umno president Datuk Seri Ahmad Zahid Hamidi "at work"? Taking into account Perak is his home state, could Zahid be telling Muhyiddin, "If we can do it in Perak, we can do it in Putrajaya, too"? In a nutshell, the events in Perak could very well signal important changes, i.e. Umno-Bersatu split at state level, and new cooperation between Umno and Pakatan Harapan parties.
Still, Umno is expected to helm the new government. Two names are being floated. One is Datuk Seri Zambry Abdul Khalid, himself Perak MB before BN lost GE14. The other name is Datuk Saarani Mohamad, the current state Umno chief.
But now, Ahmad Faisal is singing a different tune. Malay Mail Online quoted him as saying there will not be a transition government but rather a change in menteri besar only. Another report has him hinting of a PAS-Umno-Bersatu set up. That remains to be natural. We will just have to see how and what pans out. 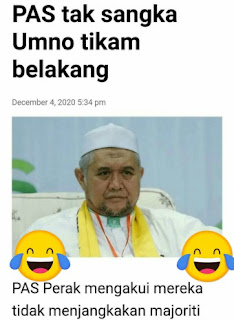 Bear in mind that PAS secretary-general Datuk Takiyuddin Hassan is on record saying PAS has decided not to join efforts to form a new Perak state government. He went on to say that this was the decision of the party's central leadership following Ahmad Faisal's ouster.
Therefore, a big question being asked is, will what has taken place in Perak spill over to other states, in particular Johor and Melaka, where ties between Umno and Bersatu are, to say the least, strained? And a bigger question is, as said earlier, will all this have an impact on Putrajaya? In short, is something about to happen at the federal level?
Umno and DAP leaders are now saying it's time for a vote on the prime minister. A vote of confidence, they say, would lay to rest any questions on the support the PM has and the legitimacy of the Perikatan Nasional government.
Mohamed Nazri, Umno leader and MP for Padang Rengas (incidentally a constituency in Perak) is quoted by MalaysiaKini as saying, "Once and for all, we can settle this." At least 25 opposition MPS have submitted a no-confidence motion against Muhyiddin while two MPS (from Umno and PAS) have submitted confidence motion.
Speaker Datuk Azhar Harun has always maintained that in accordance with parliamentary procedures, government business matters shall take precedence over other matters. Motions of no-confidence and confidence, obviously, fall under "other matters".
But in the Perak assembly where the speaker is also governed by the same procedures, the speaker allowed the confidence motion to be fast tracked, resulting it to take precedence over government business, albeit a very important one, i.e. tabling of the state budget for 2021.
So, DAP's Teluk Intan MP Nga Kor Ming is asking, "If Perak can do it, why not parliament?" To ask it in a classic Malaysian styled poser: If Perak boleh, why parliament tak boleh - Mohsin Abdullah 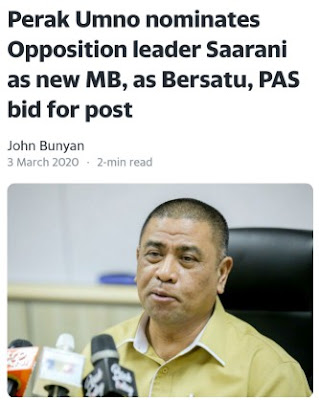 What will the next Perak
government look like?...
Political change is underway in Perak following the ouster of Menteri Besar Ahmad Faizal Azumu, who is from Bersatu. The situation is very fluid at the moment, but here's what we know so far, and what the possibilities are in the coming days.
What happened?
On Friday morning, the Perak State Legislative Assembly voted 48-10 against Faizal during a motion of confidence. The vote had been fast-tracked after emergency motions by Umno and DAP were accepted by the legislature's speaker. Faizal acknowledged the vote and promised a smooth transition. 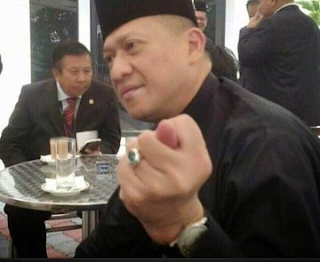 Why did it happen?
Faizal said he did not see it coming. However, Padang Rengas Umno chief Nazri Abdul Aziz (above) told Malaysiakini that Perak Umno had been unhappy with Faizal for the last two months. "The final straw was Faizal's appointment of (Umno's Pengkalan Hulu assemblyperson) Aznel Ibrahim as his political secretary (in October), without consulting us," Nazri said.
What happens next?
Faizal has given his assurance that he will not seek to dissolve the State Assembly and call for a snap election. This means that a new state government has to be formed. Umno, which has the most seats in Perak, is already making moves to nominate a menteri besar.
Who will Umno form a government with?
Forming the new Perak government will require the control of 30 seats in the State Assembly. Umno has 25 seats. PAS - which has 3 seats - has decided not to join in efforts to form the next state government. PAS had supported Faizal to stay on as menteri besar. 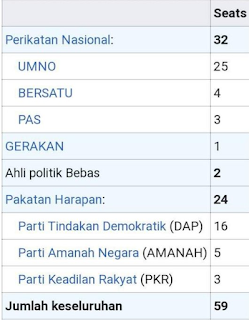 This means Umno must get support from Bersatu and its six assemblypersons to form the next government. Faizal has said that Bersatu is slighted by his ouster, but that efforts must be made to reconcile and form a new government.
What if Bersatu doesn't support Umno?
If Umno doesn't get Bersatu's backing, this means the party must try to cobble up support from Pakatan Harapan. DAP has 16 assemblypersons, Amanah (5) and PKR (3).
Malaysiakini understands that the situation is very fluid at the moment and that all cards are on the table. There is even talk about a possible "unity government". 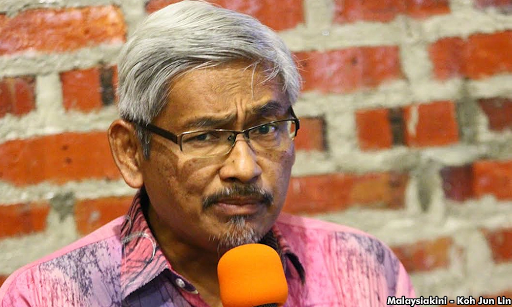 Political scientist Wong Chin Huat said the simplest way out is for Umno and DAP to have a Confidence and Supply Agreement (CSA) with power-sharing through legislative reforms. "Yes, CSA is basically power-sharing through the State Assembly instead of state cabinet," Wong said in a Facebook post.
What if no one has a majority?
If Umno, or any other party, is unable to secure majority support, then there are two possible options. The first is a minority government. DAP's Tebing Tinggi assemblyperson Abdul Aziz Bari (above) said that while there is no specific provision in the Perak State Constitution for this, the sultan does have the prerogative to form a minority government.
"That’s (possible) when such is the only option left, but as of now I don't think we have reached that stage," Aziz told Malaysiakini. If a minority government is not formed, then the only option left is to dissolve the State Assembly and call for a snap election. 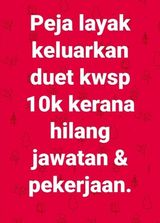 What impact will this have at the federal level?
Nazri said the ouster of Faizal does not reflect Umno's ties with Bersatu. "This is not a matter of us being angry with Bersatu, but we (Umno Perak) are angry with an individual... who failed to perform as menteri besar.
"This was not an Umno decision, but a decision of Umno assemblypersons," he said. Nazri added that Umno MPs have no problems with Prime Minister Muhyiddin Yassin, and has assured that they would support him if there was a vote of confidence. - Zikri Kamarulzaman,mk 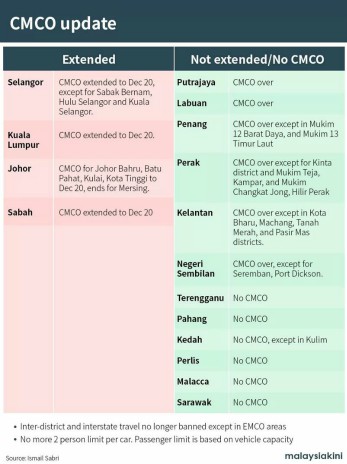 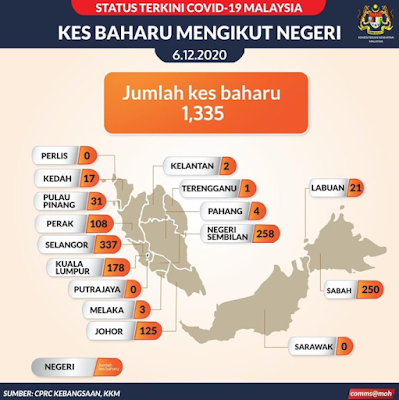 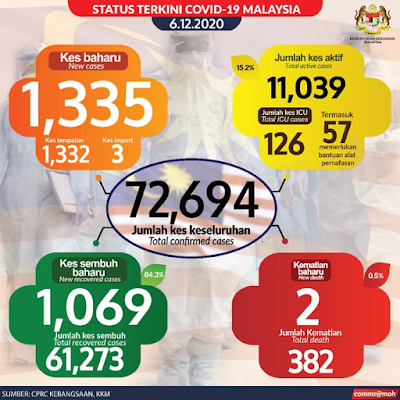