I never realised the enormity of the RM’s (Ringgit Malaysia) value till reality hit squarely in my face. I was at Ipoh’s more popular money changer along Jalan Yang Kalsom recently to acquire some NTD (New Taiwan Dollar) for my year-end trip abroad. The official rate on that day was 7.34 Taiwan dollars to one Malaysian ringgit. The changer’s rate was obviously much lower as it is his business.

The guy at the counter quoted 6.9 Taiwan dollars to a ringgit. I was hesitant to transact thinking that the rate would go up, as that was the trend that day. But his answer was something unexpected. “Uncle, the ringgit’s rate is very volatile; it may go up or down anytime. You better change now as I can’t guarantee the rate even by lunchtime today.”

It has been a roller coaster ride for our currency. The RM, over a period of time, has acquired a notoriety not seen since it was pegged at RM3.80 to the US dollar by Mahathir following the financial crash in the early 1990s. It clawed its way to RM3.20 to 1 USD after stagnating for nearly a decade. Now it is free-falling like nobody’s business. In fact the RM is the worst-performing denomination in Asia.

I thought the honour belongs to the Thai Baht and the Indonesian Rupiah but surprisingly these two currencies fared far better. A friend complained that the traders at the border towns of Betong, Pekan Siam and Hatyai had stopped taking the ringgit in their daily dealings preferring the baht over the ringgit. This is a slap on our face considering the disdain we have had for our neighbours’ currencies.

Bank Negara Malaysia (BNM), our central bank, is never short of excuses. It has constantly reminded Malaysians that the country’s economic fundamentals are strong and as such the ringgit’s value will stand the test of time regardless of external pressures beyond the regulatory bank’s control. In spite of all the assurances the ringgit’s value continues to spiral downwards.

Bank Negara Malaysia, after much soul-searching, initiated new measures to encourage domestic trade of the ringgit and to stem its slide against the Greenback. Effective Monday, December 5, exporters could only retain up to 25 per cent of export proceeds in foreign currency while the remaining 75 per cent must be in RM. Previously it was limitless.

As a sweetener, to keep more cash at home, proceeds from exports would earn an interest of 3.25 per cent per annum. The new measure, according to BNM, works but to what extent? Why now when the local currency has been free-falling for over a year? It is a clear case of too little too late.

Will the long-suffering rakyat be relieved of this curse? I have a nagging feeling that we will be in the rut far longer than most have anticipated. The reason is obvious but few want to dabble in it for fear of being branded a “traitor”. No, not with the Sedition Act looming on their conscience.

Former Finance Minister Tun Daim Zainuddin has openly said that the poor performance of the ringgit is not caused by external pressures but poor governance.

“It’s a crisis of confidence,” he told reporters during a media interview recently. His finding was confirmed by prominent Malaysian economist, Jomo Kwane Sundaram, who attributed the problem to a “confidence deficit arising from the 1MDB scandal”.

Jomo did not mince his words when he told the Edge on Thursday, December 8.

“Over the last one-and-a-half years or so, the ringgit has been steadily declining. This cannot be simply attributed to the collapse in the price of crude oil. There’re many factors behind it, including a loss of confidence in the government as more and more revelations are made about 1MDB.”

The performance of stocks is a good analogy. Trading increases when market players perceive the stocks are from well-managed entities with solid backing while the dubious ones are being shunned. That in short is what happening to our battered ringgit. And no solution is in the offing until, of course, the inevitable happens. You know what I mean.

While we wallow in our sorrows those earning Singapore and American dollars are laughing all the way to the bank. - Fathol Zaman Bukhari,Ipoh Echo

Will Najib call for an election
in the first quarter of 2017...

The mighty Kerbau, a formidable beast of burden, will take it's cue from anyone - even a child - anyone who has in their hands the ropes tied to the Kerbau's nose ring....for the bufflo and the child knows that the slightest of tugs on that rope will tell the Buffalo who is its master because it inflicts pain upon the animal should the Kerbau not do as it is told!

Umno and PAS have got the rural Malays the same way the mighty formidable beast of burden, the Kerbau, is got by that child.... through the nose ring of the Malays in the rural areas and at times even in the urban areas..

For the rural Malays the ring in their nose attached to the ropes held by PAS and Umno are driven by the two R's - the Ringgit and Religion in equal doses - but when push comes to shove, the ringgit is the more persuasive agent of the two R's.

The next federal election, like all the previous elections, will be fought, lost or won among the Malays in the rural areas where Umno and PAS have established an effective network of committed electoral organisers and workers who can deliver the electoral votes that PAS, Umno would need to win any general election.

This time around Umno will need PAS to win the general election and in that need PAS can see that most elusive of their political dream...to be relevant at the national level. And once it is relevant at national level, then PAS can then carry their Jihad for Hudud and other Islamic values to the National level and encompass Muslim and non-Muslims into the bargain....for has not PAS declare their intent to make Malaysia and all Malaysians beholden to Hudud and Islam?

What then of Umno? For Umno, if PAS is needed to win the next general election, then Umno will make a pact with PAS. If the devil is needed for same...then it will be a pact with the devil. Damm race or religion.

Does DAP want a Chinese as PM? Of course if they can they want to.

Does the DAP think that having an alliance with PKR and PPBM will get the Malays on side and make DAP a "Malaysian" political entity.....maybe yes and maybe no...but any alliance that divides the Malay can only strengthen DAP for it offers an alternative to these Malays other than what Umno and PKR can offer. The Malays who have joined DAP are not in large enough numbers to allow Kit Siang to say that DAP is "truly Malaysian" but in politics, maybe it is enough to make DAP a "truly Malaysian" political entity...maybe!

PKR without Anwar Ibrahim is like a sailing ship becalmed in a sea without any prevailing wind to take it into port.

PPBM is in reality and in fact a clone of Umno but without its worse afflictions. PPBM will also use the two R's to win the rural electorates over but it will not allow the two R's to be the reason the rural Malays will cast their votes PPBM's way. PPBM cannot match Umno in these .....and PPBM knows it is fighting a losing battle among the rural Malays who have been spoiled rotten by the dedak Umno has thrown their way.

And so here is the truth...if Najib calls an election sooner rather than later....maybe in the first quarter of 2017, he will secure victory for Umno and he will continue to be president of Umno and prime minister of Malaysia simply because Mahthir and PBBM will not be able to have their "jentera" ready in time to give Umno a run for its money. 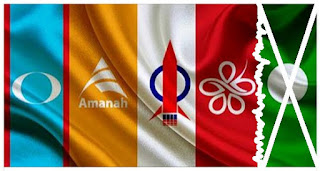 Malaysia need an Arab Spring that created the Tsunami that saw many leadership change and regimes held accountable for the things they did in the name of government.

Malaysia need People's Power that saw Marcos driven out of power in the Philippine.

Malaysian must act in the same manner that Indonesians have acted to show their disgust and contempt for a corrupt Suharto and anything else that they feel strongly about.....the current move to oust the Governor of Jakarta is a case in point.....rightly or wrongly, those who want him ousted have been able to bring in to trial and he awaits to be judged.

And Malaysians must have the resilience of the Thai people who are prepared to demonstrated and come out onto the streets in numbers large enough and long enough, to make the change they desire for their country - at whatever cost to themselves.

Malaysians are not like the Arabs, not like the Filipinos, not like the Indonesians or the Thai people. At most they will spend a few hours on the streets of KL in support of Bersih and in the past, for Reformasi....and after the few hours are over, they go back to the comfort of their home, back to the life they are not prepared to turn upside down just to put politicians back into power or into power .....for Malaysians knows too well what all politicians do once they are in office.

The hypocrisy of Najib Razak... 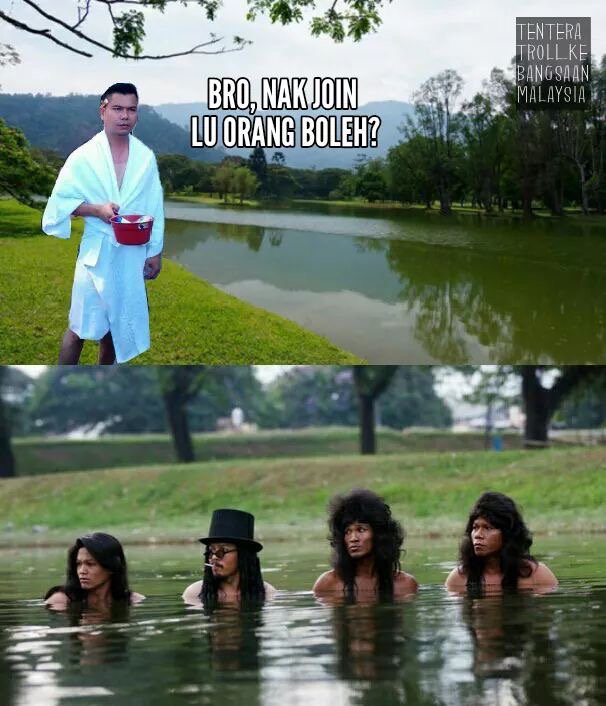