Why Did Najib Pay RM1 Million To SUPP...

However, Peter Chin neither denied nor confirmed if the matter was true.

The ex-Sarawak United People's Party (SUPP) president said the publication of the images at a time when Sarawak is facing its election was aimed at disparaging the image of SUPP and its candidates.

"This publication by Sarawak Report is, in my view, an effort to cast negative aspersions on the SUPP leadership then and now, hoping to mislead voters from voting on current issues which are important to the people of Sarawak," he added in a media statement.

Urging voters not to be swayed, he said the issue was another example of "coordinated attacks with international parties meddling in the Sarawak election".

"I want to assure every voter that SUPP has not done anything wrong under the existing laws of our country," he added.

Sarawak Report, in its latest article, had published the images of two cheques bearing payments purportedly made by Najib to SUPP in 2012 and 2013.

The whistleblower site said this raised questions as to why the prime minister was making personal donations to a local Sarawak party.

Meanwhile, Chin said SUPP's information technology team, based at its headquarters in Kuching, is working on verifying the authenticity of the images in question.

"The date on the image of the cheque (blurred in a few spots) was sometime in 2013.

"I want to stress that party funding responsibilities has always been squarely on the shoulders of the party president," he added.

In March, the Australian Broadcasting Corporation (ABC) had cited bank records which detailed how payments allegedly made by Najib went to political affiliates in the run up to the last general election, which included SUPP.- mk 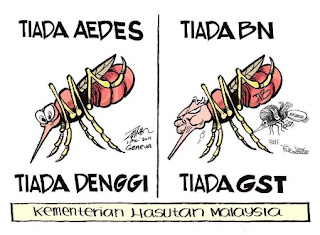 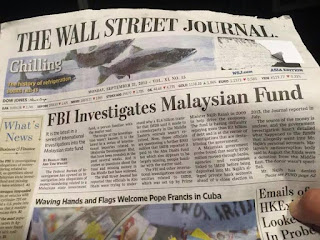 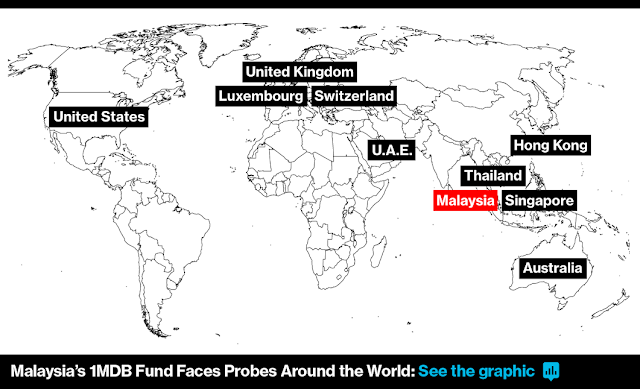 A Letter From Sarawak To The Voters In Sarawak...

My Sarawak friends, I am surprised you allow a pencuri into your house. Are you not afraid he will steal all your timber, oil and gas and everything of value? He has already left you with a debt of RM50 billion. His friends are lying when they tell you, "Dont worry Sarawakians dont have to pay this debt".

Tell Adenan not to con you. Dont be a conman. Tell Adenan Satem that if he mixes with a thief, then chances are he will also become a thief. Adenan says if UMNO enters Sarawak he will resign. But Adenan forgot or pretends to forget that it was the same thief who appointed him to his post. If the thief did not agree, Adenan will not be the Chief Minister. If he does not want UMNO to enter Sarawak then why does he allow this thief to roam all over Sarawak?

Doesnt he know the thief is eyeing what else to steal? Not only is the thief given free right to roam but his deputy too. So how can you say that UMNO is not in Sarawak already when Adenan never stopped them  from coming to Sarawak? Yet you stop opposition members from coming and campaigning because you say they are troublemakers. They are Members of Parliament who have been elected by the people. They are not troublemakers but they make a lot of trouble for the thief who has stolen the rakyat's money. The voters do not elect troublemakers to be our Members of Parliament. Their job is to check and monitor the thief. Adenan openly supports this thief and says he is the best and that he has visited Sarawak 50 times. Adenan has even suggested a newer and better wife for this thief.

Surely Adenan knows that this thief is already rejected by the voters on the Peninsula. He is still not out of a job because of Sarawak's support. If Sarawak does not support him, the thief will have no more place to hide.  That is why he is all over Sarawak begging the voters to save him. Sarawak does not need this thief. It is the thief who needs Sarawak. His life is in the hands of Sarawakians. If you dont reject him he will continue to steal. Then your life will be in his hands.

Surely Adenan Satem knows that they have already groomed their man to take over the Chief Minister's job. So UMNO does not have to be present in Sarawak to run Sarawak as even now Adenan already kowtows to him.  With their man in the Chief Minister's position everything will go to UMNO and his family will get all the big contracts in Sarawak. You can already see them moving everywhere with the thief. Voters in Sarawak must stop the theft and leave everything to the natives of Sarawak. Do not trust this thief. Do not believe him, his words or his promises. A thief will always lie. So be warned. Do not fall into his trap. Kick him out of Sarawak and tell Adenan that if he identifies with the thief then we voters will reject Adenan too. Adenan is too close to the thief so the voters must distance themselves from Adenan. Sarawakians be careful. The thief is a liar too.

Dont forget what he said about 'donations'. First he denied   the existence of money in his personal account and said it is stupid to put so much money in his personal account. His UMNO supporters repeated what the thief said. Later when it was proven that the money was put into his personal account he kept lying by changing his stories. In the end it became a mysterious Arab donor. They never produced the mysterious Arab donor.  Why should anybody give the thief so many billions of cash money? Later the thief said he had returned the money but he could not show any documents or evidence how he had returned the money and to whom? He is a thief and a liar.

Only Adenan trusts him and allows him into Sarawak. Ask him why he returned the donation and not spend the money on the poor in Sarawak? According to the thief and liar, after all, it was a donation and there was no need to return it. Dont trust him. He is not interested in helping the Dayaks. He just wants your votes to stay in power and protect himself.  Just look at the Parliament. He gave the Speaker's post to Sabah. When there was a vacancy for the president of the Senate did it cross his mind to give it to a Dayak? Why is he not offering the office of Chief Minister to a Dayak? Tan Sri Stephen Kalong Ningkan the first Chief Minister of Sarawak was a Dayak. So was the second Chief Minister of Sarawak Dato Sri Penghulu Tawi Sli. These people were all Dayaks. So he is not sincere when he says he wants to help the Dayaks. I told you he is a thief and a liar.

Think carefully before voting and dont make a blunder by trusting him and Adenan Satem. Both of them will make promises and statements to fool you. Do you trust a thief and a liar? - Temenggong, source

The hijacking of the Sarawak election