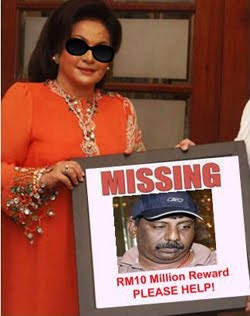 The lawyer for private investigator P. Balasubramaniam recently offered his help to the Malaysian Anti-Corruption Commission (MACC) in its investigation into his client’s allegations of blackmail and bribery that implicate people close to the Prime Minister and his wife.

Americk Sidhu emailed MACC officer Abdul Rahman Bachok last Dec 4 and again on Dec 10, saying he could secure Bala’s cooperation in the investigation. However, apart from a phone call from Abdul Rahman on Dec 8 to confirm the email sender’s identity, Americk has not received any response from Abdul Rahman or the

“It appears like they are stumped and do not know what to do,” said Raja Petra, who is in self-imposed exile from Malaysia.

“To respond would mean that the MACC would have to meet Bala and take his statement, which is clearly something they would not like to do.”

Raja Petra–popularly known as RPK—suggests that the MACC is hoping that Bala is not contactable so it can close the file and declare that it is not able to proceed any further in the investigation.

Last Dec 3, Parti Keadilan Rakyat (PKR) Youth leader Shamsul Iskandar Mohd Akin lodged a report with the MACC, asking it to investigate Bala’s revelations, posted on YouTube and widely reported by online media, but ignored by Malaysia’s mainstream newspapers, which are either aligned to or controlled by the ruling elite.

Bala, a former police officer, reaffirmed a sworn statement he made on July 4, 2008, which alleged a link between Prime Minister Najib Abdul Razak and murdered Mongolian model Altantuya Shaaribuu. However, he said, he was blackmailed and bribed into issuing a second statutory declaration contradicting the first and into leaving Malaysia.

Following Shamsul’s report, the MACC asked him to help locate Bala, and Shamsul said he would contact Bala’s lawyer.

RPK suggests that the MACC was still deciding how to respond without hurting Najib’s future.

Will MACC meet Bala? thats the 1 million $$$$ question. I feel they should, after all Najib had denied knowing Altantuya and even 'angkat sumpah' in the mosque over the matter.

If there is nothing connected between Najib and Altantuya, as he claimed to be, then he shouldnt be afraid of anything, let MACC handle the case freely, but for now I dont know who is afraid of whom..........

Seriously, Why Do Malays Need Alien To Speak For Them? http://thextalks.blogspot.com/2009/12/why-do-malays-need-alien-to-speak-for.html