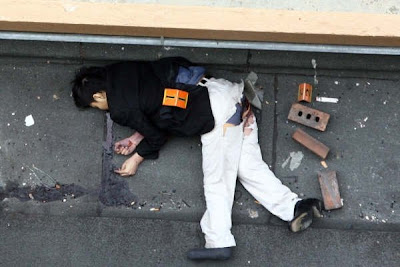 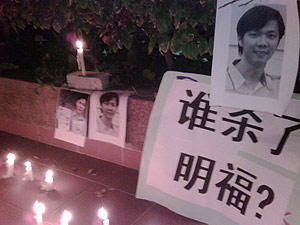 The tragic case of Teoh Beng Hock has taken a supernatural twist, with three individuals reportedly having seen his spirit roaming in the Malaysian Anti-Corruption Commission's Selangor headquarters in Shah Alam. According to China Press, his apparition was spotted on the fifth floor of Plaza Masalam, where his remains were found, and on the 14th floor, where the MACC office is located.The report said a security guard and two MACC officers had bumped into the spectre. The sightings took place sometime in October, more than two months after the 30-year-old's death.

The security guard, who wished to remain anonymous, said he did not see Teoh's face, but the apparition was clad in the same clothes which the deceased had worn when he came to the MACC office.

"I saw his dead body after the fall. I am sure that it was Teoh even though I could only see him from the back," he said, adding that the incident happened around 6.30pm.

Recalling the spine tingling encounter, the security guard said he went to the washroom located on the fifth floor where he suddenly heard footsteps. The other officers were not on duty at the time.

"I had a strange feeling. Usually at that time, nobody would be around. So I walked out of the toilet... then I saw a man in front of the lift, he was wearing a black coat and white pants," he said.

At that point, it did not strike the security guard that this could be Teoh's spirit.

"I asked where he was going as no one was upstairs. He just answered 'I am going upstairs', the lift door opened and he went in.

"That was when I thought it could be Teoh, so I rushed to the security room to check the CCTV and saw there was nobody in the lift," he said.

The security guard also related the experience of a MACC officer.

"He was sitting on the sofa watching TV when he suddenly felt something biting his neck, and when he checked, he found a red mark on his neck.

"When he was sitting in the reception area, he saw Teoh walk out from the office.

"Then the officer felt as if someone was pulling his leg. He got scared and rushed out," he said.

Following this, the security guard said the officer requested for a transfer to the MACC headquarters in Putrajaya and "never came back."

Teoh, who was the former aide to Selangor exco Ean Yong Hian Wah, was found dead after a marathon questioning session by MACC officers which dragged into the wee hours of the morning. Although the official version is that Teoh had committed suicide, his family refused to believe that the father to be, who was slated to get married the next day, would take his own life.

Following a massive public outcry, the government ordered for an inquest to be held to determine the cause of death. Teoh's remains were exhumed for a second post-mortem after renowned Thai pathologist Porntip Rojasunand made the startling revelation that there is an 80 percent probability of homicide.

Hello !.
You re, I guess , perhaps curious to know how one can reach 2000 per day of income .
There is no initial capital needed You may commense to get income with as small sum of money as 20-100 dollars.

AimTrust is what you need
The company represents an offshore structure with advanced asset management technologies in production and delivery of pipes for oil and gas.

It is based in Panama with offices everywhere: In USA, Canada, Cyprus.
Do you want to become really rich in short time?
That`s your choice That`s what you wish in the long run!

I`m happy and lucky, I started to get real money with the help of this company,
and I invite you to do the same. If it gets down to select a proper partner who uses your funds in a right way - that`s AimTrust!.
I take now up to 2G every day, and what I started with was a funny sum of 500 bucks!
It`s easy to join , just click this link http://rokahadela.uvoweb.net/wiwegiry.html
and lucky you`re! Let`s take our chance together to get rid of nastiness of the life