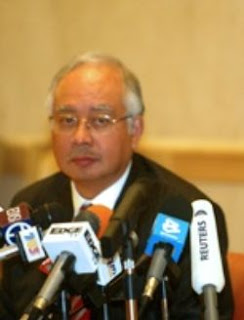 "What is important for us is to look forward to the future. Each prime minister has made a lot of contribution, otherwise we wouldn't be what we are today, Malaysia will not be a successful nation and regarded as a role model if all the PMs in the past had not made their contribution," he said.

On Dec 21, DAP adviser Lim Kit Siang in his blog had urged Najib to set up a royal commission to probe the allegations contained in the book, which among others had claimed that Mahathir had squandered up to RM100 billion during his 22 years as prime minister.

In an immediate response, Mahathir in his 'Chedet' blog welcomed the call for a royal inquiry and said he would cooperate fully with the commission.

Wain, who is the former managing editor of Asian Wall Street Journal, has estimated that Mahathir had squandered up to RM100 billion in his years as PM.

True enough each PM has made a lot of contribution to the nation,but Najib musnt forget that each PM too had squandered billions of the rakyat's money.