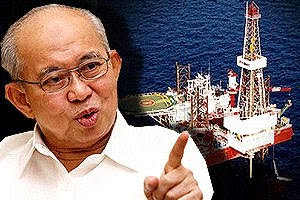 Our nation is blessed with a modest quantity of oil reserves. As a young nation coming to terms with this natural bounty in the early 70s, our primary thought was to conserve that oil.

That is why, when Petronas was formed, we instituted the Petroleum Development Council. Its function was to advise the prime minister on how to conserve that oil and use it judiciously for national development. We knew our reserves would not last long.

We saw our oil reserves as an unearned bounty that would provide the money for modernisation and technology. We saw our oil within a developmental perspective. Our struggle then, was to make the leap from an economy based on commodities and low-cost assembly and manufacturing to a more diverse, economy based on high income jobs.

Aware that we had an insufficient tax base to make the capital investments needed to make the leap, we planned to apply oil royalties to what you would call today strategic investments in human capital.

Whatever money left after making cash payments, allocations for development funds, etc, was to be placed in a Heritage Fund for the future.The Heritage Fund was for education and social enrichment.

In working out the distribution of oil between the states, who had sovereign rights over it, and the federal government, we were guided by concerns for equity between all Malaysians, a concern to develop the poorer states (who also happened to be the oil rich states) and a concern for inter-generational equity.That oil was for special development purposes and it was not just meant for our generation.

Sabah and Sarawak joined Malaya to form Malaysia because of the promise of development funds. Yet today, despite being their massive resources, they are some of our poorest states.

Instead of being our ace up the sleeve, however, our oil wealth became in effect a swag of money used to fund the government's operational expenditure, to bail out failing companies, buy arms, build grandiose cities amidst cleared palm oil estates.

Instead of helping eradicate poverty in the poorest states, our oil wealth came to be channeled into the overseas bank accounts of our political and politically-linked class.

Instead of being the patrimony of all Malaysians, and for our children, it is used as a giant slush fund that has propped up authoritarian rule, eroded constitutional democracy and corrupted our entire political and business elite.

Our oil receipts, instead of being applied in the manner we planned upon the formation of Petronas, that is, according to its original developmental purpose, became a fund for the whims and fancy of whoever ran the country, without any accountability.

The oil that was meant to spur our transition to a more humane, educated society has instead become a narcotic that provides economic quick fixes and hollow symbols such as the Petronas towers.

Our oil wealth was meant to help us foster Malaysians capable of building the Twin Towers than hire foreigners to build them, a practice in which we preceded Dubai. I would rather have good government than grand government buildings filled with a demoralised civil service.

It is no wonder that we are no longer productive, no longer using our ingenuity to devise ways to improve ourselves and leap forward.

Malaysia is now an “oil cursed” country. We managed to arrive at this despite not having a lot of oil. When I started Petronas in 1974, I did not realise I would see the day when I would wish we had not uncovered this bounty.

Our failure has been political and moral. We have allowed greed and resentment to drive our politics and looked the other way or even gone along while public assets have been stolen in broad daylight.

(Part of the speech given by former finance minister and Umno vice-president Tengku Razaleigh Hamzah at the one-day Young Corporate Malaysians Summit,Kuala Lumpur)