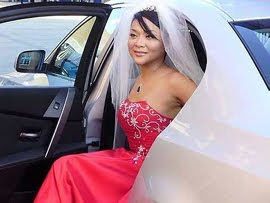 Malaysian transsexual Fatine's UK love story has sparked so much hate back home that she fears to return.

"I am so frightened to go back. I am worried for my safety," she said in response to what she claimed was a Malay tabloid's wrongful portrayal of her love and civil partnership marriage to a Briton.

She said she had been receiving many emails and comments from people condemning and accusing her of insulting the Malaysian government.Fatine, who was born Mohammed Fazdil Min Bahari said it was frustrating that people didn’t understand that she came to the UK because she wanted to be with Ian Young, the man she loved.

The 36-year old make-up artist, said she could not do that in Malaysia, adding that people only seemed to be taking a religious point of view over the matter.

Speaking up for the first time after The Sun newspaper in London broke the story, Fatine said she did not know what to do as her family had already disowned her.

"I’ve spent hours on the phone asking for forgiveness. I love them although but I can’t change what has happened," she said.

Fatine said it was a shame that the Malay tabloid had "twisted" their story, stressing that as it was never their intention to insult the Malay community.

"They also put my father’s name in it, which was unnecessary and my mother has been left frightened to leave the house," he added.

Fatine said she regretted that the community was taking it personally.

She said she appreciated that the Malays are very traditional and "people like me aren’t acceptable" and hoped that things would cool down eventually.

Fatine, who married Young in a civil partnership in May, faces deportation after her Leave to Remain visa was rejected by UK's Home Office over an "incorrect" photograph.

A second application with a passport photograph with a white background as required, instead of blue, was submitted for reconsideration but it was also thrown out in October.The couple have since submitted their third application for a Right to Family Life under the Human Rights Act in Britain. 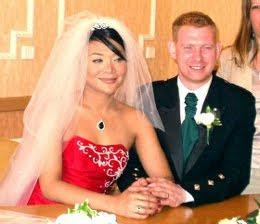 On Monday, Immigration director-general Datuk Abdul Rahman Othman said the department might take action against Fatine when she returns home as it views problems like overstaying seriously.

Young, 30, who runs a property maintenance company, however, said Fatine’s application was still being processed by the UK Border Agency and she should not be classified as an overstayer.

He also claimed that as a result of the "misleading" article, everyone was misreading their story as an insult to Islam which it was never intended to be.

"All we want is to be married, be happy and living together. The only way we can do this is over here in the UK," he said.

He said the article made it sound like they were trying to make a mockery of Islamic laws, which was never their intention.

"As a result of the way we have been portrayed, I feel that we would be in more danger than ever if we were to try and live in Malaysia," he said.- by Choi Tuck Wo in London 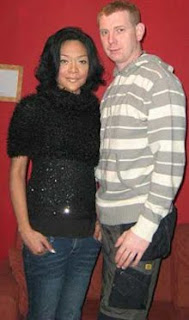 Apparently, Fatin, the Malaysian transsexual fighting deportation from Britain will be punished for bringing "great shame" on the country, Malaysian authorities said according to reports today.

Immigration Department director-general Abdul Rahman Othman said that once deported to Malaysia, Fatine could be banned from travelling overseas for at least two years.

"This depends on the severity of his offence in Britain," Abdul Rahman said according to the New Straits Times newspaper.

"The penalty imposed on Fatine may be more severe than the two-year passport issuance deferment as he has brought great shame upon us," he said.

From Islamic point of view, you just can't change you sex without strong reasons. If you were born with no apparent sexual organ so as to determine you a male or female, then you can choose whichever of the two sexes you want to be. But if you just want to change your sex out of pleasure, with no urgency of whatsoever than you are breaking the Islamic rule.

The law of the Quran is determined by Allah the almighty, no one by the name of a devout muslim would ever want to challenge it. If you can't accept the rule then its yours personally. You just cant impose what you feel or belief to others.

Mohammed Fazdil bin Min Bahari aka 'fatine'..i strongly believe that u know all the consequences of your acts. U were born as a muslim man n u will return to Allah then as it is. U grow up in a muslim culture, u learnt the islamic laws when u were in schools and u've lived in a country where the Malays here abide by the islamic laws. u can't deny the fact. Bro, please return to the Quran and The Prophet's Sunnah. Bro, immediately ask for Allah's forgiveness because the truly everlasting love is only for Allah

mohammed fazdil,can`t you imagine the consequences from what you have done?not only to yourself, but your family especially your `ayah` and `mak`?why must you let them down but and at the same time you felt `malaysian` disappoint you upon your decision? you should realize Prophet Muhammad would not recognize you as his ummah!!! SUBHANALLAH.. stop playing with Islam mohammed fazdil.. you will never imagine what Allah can do.. this is the time for you to repent..

WTF is wrong with you guys? Fatine has all the right to choose her sexuality and pursue on her happiness! You guys who oppose that, get a life!

Thanks for your sincere comments.

what to do?
this kind of people insult religion or community...

I would say that parents are guilty because they brought him in wrong way so now they are paying price.

Ask those malay girls that accept gay friends and treat them nicely...

I actually feel sorry for Fatine. Pity that he/she was born a male when his/her instinct is definitely a female. She was born this way and I think it's no one's fault. He/She is still human and wants to have a normal life. Even though transsexualism is not yet widely accepted by the society, I feel we should stop harassing this poor soul. Indeed we are living in a very judgmental society. But let God alone evaluate and inflict as necessary. We are also not perfect, and probably our morality isn't that superior either, just because we are sexually normal. From a devoted Muslim.

It seems Men love to cultivate their sexual preference on whether to be male or female. Its only in their mind. Strangely they can change from being male to female to male again and to whatever they desire. They have a very weak resistance in following out of ordinary nature law, they cant control their desire when seeing young girls with the same lust towards woman, pornography, pedophiles thingy, sex with animals, life size dolls and more weird stuffs they can think of. It must be something wrong with Men's brain -eating altered dna food, chemical pollution, seeing so many disgusted kinky stuffs ..or whatever made them behave such way!

If he is indeed a khunsa, then I don't give a damn.

I do not have issue with Gay men, albeit being a muslim myself. But he/she should know how to discreet this event from the media. Siapa suruh post gambar, tangkap gambar semua and now everything is on the papers. Love is one thing but you gotta understand how your old man's feeling back home. You know the consequences and you chose to be this way so .. face the music, man.