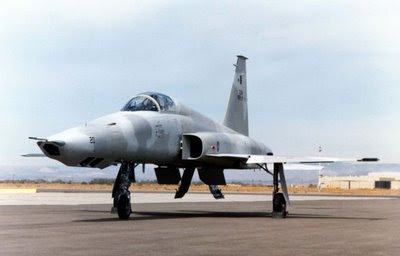 It said something about the depth of corruption when a newspaper revealed that two F5-E jet engines from the Royal Malaysian Air Force had been stolen and sold to a foreign buyer. Armed Forces chief Gen Azizan Ariffin said that those responsible for stealing should be charged with treason. “It is a serious offence that tarnishes the image of the Armed Forces,” Azizan told reporters. “There should not be any compromise on the punishment for their actions.”

To recapitulate, the thefts were discovered in May 2008 when Azizan, then the air force chief, ordered an audit of the force's assets. It was then ascertained that the two engines — collectively worth RM100 million — were missing. A police report was subsequently lodged in August last year. In an inquiry and disciplinary hearing later, the New Straits Times reported, a brigadier-general and 40 others were sacked. The engines were believed to have been sold to an international company in South America, according to Defence Minister Datuk Ahmad Zahid Hamidi.

But the NST, citing intelligence sources, said that the engines were shipped to a Middle Eastern country that “was the subject of US sanctions”. The country was apparently keen on developing its own jet fighter. The paper also said that the people implicated in the inquiry could have also been involved in other logistics irregularities “amounting to several million ringgit”.

Clearly then, this goes beyond common garden-variety venality. The thefts and subsequent sale of the parts would have affected national security. And it has international implications. The United States, which sold the hardware to the RMAF, would surely want to know who the buyers were. Indeed, as Azizan pointed out, there is a good possibility that investigations will go international.

Prime Minister Datuk Seri Najib Razak has promised that there would be no cover-up. That is the only way to go. The best method to deter corruption is swift and harsh punitive action. Indeed, one of Najib's stated aims is to bring Malaysia among the top 25 countries in the world corruption index. The country is currently running 56th. Those are lofty ambitions and it will take a great effort of political will to pull that off. But it can only be achieved if wrongdoers realise that crime does not pay.

In the case of the jet engines fiasco, it has been suggested that the “traitors” — in the words of the Armed Forces chief — be tried for treason. The last time that happened in Malaysia was in the 1990s when a group of religious fanatics calling themselves the Al-Ma'unah raided a military arsenal with the aim of bringing down the legally elected government. They were caught and charged with treason. They were found guilty and they were hanged. The public will no doubt be watching to see how the government handles the current case.

The theft happened in 2008. How come it was not reported in the Auditor's Report released recently? Was it overlooked or the AG tutup mata sebelah?

Najib was the defence minister then,by suppressing the expose can he be charged for treason.....

that goes to proof that the AG office works in tandem with Najib for a coverup.

Was this the reason Badawi took over Defence from Najib????????

Najib vs Muhyiddin in the making?