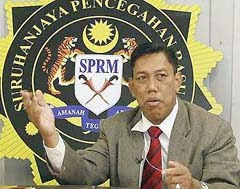 Kapar MP S.Manikavasagam, who lodged the report at the Klang district police headquarters at noon, said the contract should have been awarded through an open tender process and not direct negotiations between Ahmad and Syarikat Mariwasa Kraftangan Sdn Bhd. He said he had received information about the matter lately and on carrying out a background search on the company, he found their nature of business was making metal medals and handicraft.

"I believe there are elements of criminal breach of trust here as Finance Ministry procedures do not permit the award of government contracts through direct negotiations. This condition is relaxed in special cases involving certain security equipment or that with specific requirements, but not for personnel uniforms," he said.

Manikavasagam said the handicraft company had supplied the MACC their outfits by sourcing for the material from another company based in Kajang. He said Syarikat Mariwasa Kraftangan Sdn Bhd had also sub-contracted the tailoring of the uniforms to Maroz Tailoring Sdn Bhd.

"By all these sub-contracting, the cost of producing the uniforms had ballooned. There are conditions laid by the finance ministry that the supply of items such as shoes and waist belts be acquired from companies which deal with such items and not a handicraft company. I wondering if there is link between the sudden resignation of Ahmad Said and the award of such contracts by him," he said.

Ahmad Said announced his resignation more than a week ago, about six months ahead of his retirement next year and was quoted as saying it was time for him to do so and that his deputy Datuk Abu Kassim was capable of taking over.

Agree ... Why Do Malays Need Alien To Speak For Them?
http://thextalks.blogspot.com/2009/12/why-do-malays-need-alien-to-speak-for.html