PKR may be perceived as being wrecked with internal conflicts because the public does not understand this "new kind of politics", said several PKR parliamentarians.

Speaking to reporters in parliament today, Kulim-Bandar Baru MP Zulkifli Noordin said that there should be room for criticism between and among party members.

"I was in New York recently and saw Democratic Party member openly criticising their president, and the president accepted it with an open heart," he said. When asked if such open criticisms will tarnish the party's image, he said: "That's the beauty of Pakatan Rakyat, we may have differing views but share the same cause."

He added that that the public must be educated on this "new kind of politics" even if they may not be ready for it. Zulkifli retracted a challenge to PKR vice-president R Sivarasa to step down from his post in deference to what he claimed are more urgent matters.

"At the end of the day, we close ranks, because we still have public enemy number one to deal with - Barisan Nasional," he said.

He said the challenge he made to Sivarasa was not a call for his resignation but more to resolve the issue. "Even if I won, I would give it to Sivarasa because I don't think that I'm as capable as him. I'm just interested to resolve the matter," he said.

Further, he said, he was only dissatisfied with Sivarasa because he had misinterpreted what de-facto PKR leader, Anwar Ibrahim had said in a speech. "It wasn't criticism. If he had criticised me I would have accepted it with an open heart," he said. 'The matter is closed'

Sivarasa, however, refused to be drawn in to comment on the issue. All he said was: "The matter is closed." He said that he is obeying a directive by the party leadership to concentrate on the main agenda of winning votes in the upcoming general election. Sivarasa added that the swift resolution is proof of the strength of the party leadership. 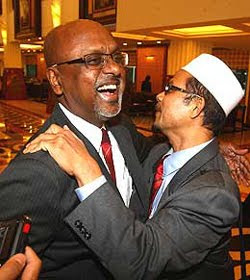 As he was speaking to journalists, Zulkifli emerged to give Sivarasa an awkward hug.

Zulkifli said that both of them met separately with Anwar over the matter and to show proof that there was no more animosity between them, they hugged one another.

PKR deputy president Azmin Ali (right) also said that disagreements are proof of a new kind of politics, and the media is at fault for zeroing in too much on PKR. "Other parties are also having conflicts... just look at MCA. But the media has chosen to highlight our issues. Even things we whisper to each other has made headlines," he said.

"The media is so used to the 'yes-men' culture where party members follow leaders blindly, that any sort of disagreement within the party is viewed negatively.

He agreed that there were urgent matters to be addressed, chief of which is Prime Minister Najib Razak's threat to win back the state of Selangor from the opposition. On claims that he is part of PKR's 3A leadership (consisting of Azmin, Anwar and party president Dr Wan Azizah), Azmin said: "As far as I know, 3As are batteries. "If I'm seen as the battery which powers the struggle then I take it as a positive thing."

This is a new political culture and for UMNO its a culture shock to them,coz all this while UMNO members are not allowed to criticize their own members and what more their corrupted leaders. No wonder UMNO members "macam kepala lembu saja" only know to mooooo only.......... 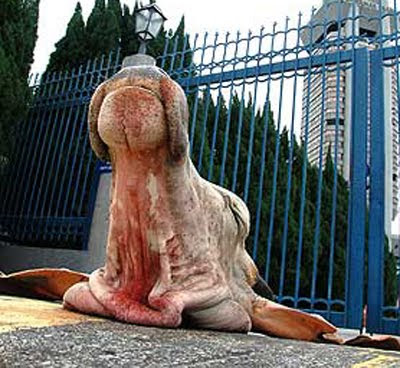