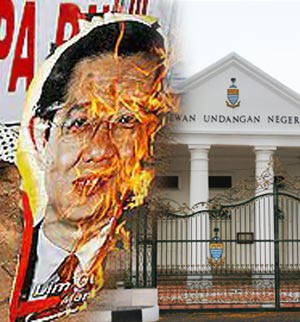 A group of state Barisan Nasional youth leaders and supporters staged a protest outside the Penang legislative assembly this afternoon against the Pakatan Rakyat state government.

The protesters vented their frustration against what they described as an "inefficient and indecisive" state government which failed to resolve the people's problems and fulfill pre-election promises.

Led by Penang Umno Youth chief Norman Zahalan, the protest started at 12.15pm and ended about 45 minutes later. It took place while the assembly sitting was going on.

The protesters also carried banners and placards condemning the state government for failing to resolve issues such as Kampung Buah Pala, Mak Mandin Rumah Hijau and the controversial conversion of a foreshore land status.

Reports also said that some of the angry protesters had also allegedly torched and stomped on posters of Chief Minister Lim Guan Eng. 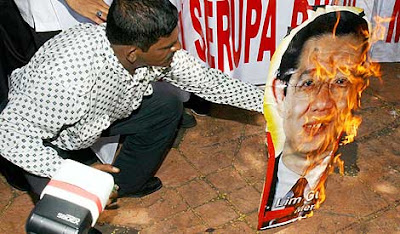 Let me ask,how many pre-election promises have ever BN fulfill when BN was in power?