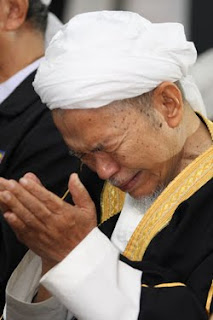 I wish to share Bro.Hussein Hamid aka steadyaku47's opinion on the choice of leaders below.......

In Malaysia now there really are only two choices in front of me. Do I accept the situation that is now in place or do I accept the responsibility of helping to change it? It is too easy for me at 63 to sink into a comfortable abyss in life and care not for anything but my well-being and that of my Family. But I want to take the path less trodden and live a life that challenges me to the extreme. And so too I think, should you.

The choice is simple. Every day you are reminded of the deeds of a government that arrogantly interpret and applies the rules of the land in its interest and its needs – not that of its people. Every day you are confronted with the reality of a life where your worth is measured to a large extent by your racial ethnicity and by who you know – which in reality makes your own self worth to be a zero – zilch. Naught!

The Malays are much reluctant to express their true feelings not because they cannot make up their minds but because they would rather hold these thoughts within themselves. I hold no such reluctance. In these last few weeks I have been told that I seem to be incline towards being an Anwar Loyalist. A supporter of Pakatan Rakyat. That I am anti UMNO. My writings are bias. And worse I seem to forget or chose to ignore that within Pakatan Rakyat there are many internal problems that they cannot overcome or resolve. That their assemblymen were leaving Pakatan Rakyat by the droves. Anwar made a mess in trying to ‘guide’ Sabah to a conclusion of his own choosing.

I know all this. I read what is happening around me. I read what Kit Siang writes. I listen to what Tok Guru has to say and read Harakah and Siasah. What I do not know I ask. I too sometimes wonder why, despite having an honest upright Menteri Besar in Selangor, there is still much unhappiness in PKR Selangor.

But in spite of all this to me the choice is simple enough. If you ask me to chose between Anwar and Najib, between a guy who has spent time under ISA and a guy who gave RM500 million of public money to his buddy for “services rendered”, between an Anwar that has served as Minister of Finance and Najib whose baptism of fire consisted of him being a Menteri Besar at a very young age and spending copious amount of ‘downtime’ in Singapore sowing his wild oats and still had time ‘buying’ somebody’s wife to make her his own, between someone with enough belief in himself to start Keadilan and ten years later become Leader of the Opposition and having over 50% of the population voting for him and a Najib whose only claim to the Prime Ministership is Tun Razak – I think the choice is simple enough. Anwar! Anwar & Anwar! 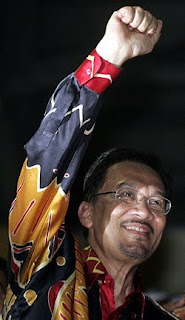 And Anwar comes with Tok Guru and Lim Kit Siang. The same Kit Siang who was sentenced to 18 months under ISA right in the first year that he was elected as a Member of Parliament for Kota Melaka in 1969 and then again in 1987 for another 17 months. Over forty years in Malaysian Politics and he is still relevant to our cause. Tok Guru is in a class by himself. He speaks five languages – English, Arabic, Tamil, Urdu and Bahasa. He had a son put away for five years again under ISA. And his integrity and commitment against UMNO cannot be questioned. Whom amongst UMNO can you pick to stand on par with these two? Not one…not even one! Huh!

So for me the choice is simple enough. I understand the problems Pakatan Rakyat now faces. I understand that in the last election PKR had to take the good with the bad in its fight against UMNO – nobody wanted to be with PKR then. Now they have to clean up the bad.

While UMNO buys their silence PKR tries to rehabilitate them – and if they do not want to be rehabilitated – then they are shown the back door where UMNO awaits. I understand that in the reality of the street politics that Anwar finds himself in now he will have to make adjustments and take as good as he gives to ensure PKR’s viability – not only politically but also financially. He is not alien to these needs. He simply has to make sure that he does not go back to the excesses expected of him during his UMNO days. There are many now who will remind him of what is now expected of him – if in case he forgets. I am one! 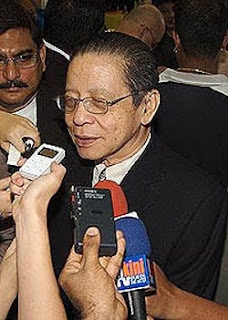 If you are true to yourself then sit down and do your sums. Stack all the good on one side and the bad on the other…you can even put the maybes on the bad side.....and if you are true to yourself you know that the good will still be stacked on Pakatan Rakyats side. On Anwar, Kit Siang and Tok Guru side.. …and that will be the side I am already on. I do not expect perfection from PR but I do expect them to get rid of assemblyman that are not serving their constituencies. They have doing so with that Port Klang guy. I expect them to resolve their differences and not sweep them under the carpets or use money to keep their people happy and quite. They have done so. They still have some way to go but I know that they have just been together a few years –UMNO over fifty. So I will give PR more time to get its act together and if they will allow me to do my part in this fight against UMNO – I will.

There are still question whether Pakatan Rakyat leaders will exercise their power with integrity and are they really up to the challenges of ethical leadership. Will they lose their moral compass? We know what UMNO has done! Why not give Pakatan Rakyat the opportunity to not abuse the trust we place in them?

You can read his full article here.

Your are right Bro.Hussein......give PR an opportunity to prove themselves worthy of our votes, rather than passing judgement, just because the gomen media says so..............